Locals In This Village In Nepal Wanted To Demarcate Border With China, But Government Ceded The Territory To Beijing 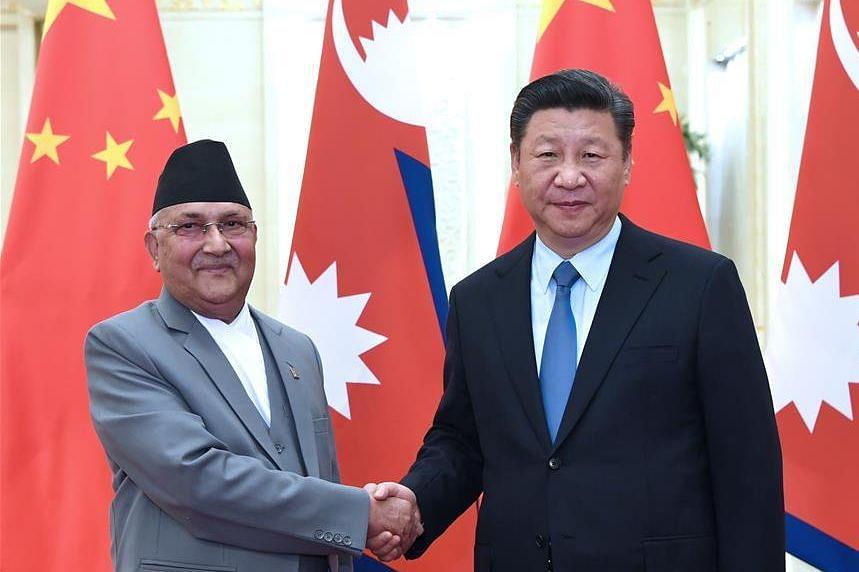 Communist-ruled Nepal has, once again, ceded territory to China.

The latest capitulation to its suzerain (China) has taken place in the Himalayan country’s northwestern Humla district.

Earlier this week, Nepal’s newspapers reported that China had constructed a number of buildings in the remote Lacha-Mimi area of Humla district bordering China-occupied Tibet (CoT).

Those reports were based on findings by Nepalese officials who had undertaken a visit to the area after locals informed them about the Chinese transgressions.

According to The Kathmandu Post, Nepal’s largest circulated English daily, Humla’s assistant chief district officer, Dattaraj Hamal, went to the area for an inspection and found the allegations against China to be true.

He reported the matter to the chief district officer, Chiranjibi Giri, who alerted Nepal’s home ministry.

The home ministry asked Giri to visit the area along with others, including senior district police officers.

That team visited the area last Sunday (20 September). It found that a border pillar — number 11 — was missing and, hence, the Nepal-CoT border was not well delineated in the area that falls under ward 6 of Namkha Gaopalika.

Namka Gaopalika chairman Bishnu Bahadur Tamang told Swarajya over phone from district headquarters Simikot that about an hour after the team reached the area, Chinese security personnel arrived in three vehicles, including an armoured personnel carrier.

“They told us we were in Chinese territory. When we told them that it was Nepal’s land, they showed us some maps claiming it was their territory and asked us to retreat. They were well armed and acted in an intimidating manner. We had to return,” said Tamang.

Tamang said that the Chinese claimed that their territory extends one kilometer south of where the newly-constructed buildings stand.

“But actually, the (Nepal-CoT) border lies two kilometers north of where the buildings stand,” said Tamang.

The inspection team prepared its report on Tuesday and sent it to the home ministry in Kathmandu late that evening.

The team said in its report that intensive efforts were on to trace the missing border pillar and once it is found, it would be clear if the land where the Chinese have constructed buildings falls within Nepal or not.

“The border pillar (number 11) went missing a few years ago and five years ago, the two sides (Nepal and China) decided to locate the missing pillar. But nothing was done from our side to trace the pillar,” he said.

China has apparently taken advantage of the missing border pillar to encroach into Nepal’s territory.

Lama said that if a straight line is drawn between border pillars 10 and 12, it will be seen that the buildings constructed by the Chinese fall well within Nepal’s territory.

According to this report in The Kathmandu Post, the missing border pillar (No. 11) was “found” buried under snow and rubble from a spot in ward 6 of the Namkha Gaopalika on Wednesday (23 September).

Local officials felt that the discovery of the missing border pillar would help in demarcating the border.

“We were planning to use it (the pillar) to demarcate the border (with CoT) afresh,” said Tamang.

However, that was not to be. In an apparent and abject attempt to please China, Nepal’s Ministry of Foreign Affairs proclaimed on Wednesday evening that the land on which the buildings stood belonged to China.

The Department of Survey, Government of Nepal, based on the official records, reports of the joint field inspection and boundary maps, has verified and confirmed that the said buildings are not located within the Nepali territory. The boundary between Nepal and China was delineated and demarcated based on the Boundary Treaty and Boundary Protocols signed between the two countries. Nepal and China have always maintained close communication on border matters.

Local officials in Humla are, understandably, upset and outraged.

“The foreign affairs ministry should have waited for us to delineate the border after we found the missing pillar. Many of us have been going to that area since our childhood and it was always Nepali territory,” said a district official of Humla who did not want to be identified.

Many others are also questioning the haste with which the country’s foreign ministry issued the statement on Wednesday evening capitulating to China and ceding Nepal’s territory to that country.

They point out that on Tuesday evening, home ministry spokesperson, Chakra Bahadur Buda, said that the report from the team that visited the site is awaited.

Buda was quoted by The Kathmandu Post as saying: “We are waiting for the report from Humla. Until the report comes, we cannot make any comments. This is a sensitive issue and without verifying it, we cannot say anything now”.

So, how did the foreign ministry issue a statement asserting that the disputed area was in China even without examining the Humla team’s report?

Many say that the swift clarification was triggered by demonstrations that took place outside the Chinese embassy in Kathmandu on Wednesday afternoon.

China, after all, is not used to and does not brook any protest or show of defiance even abroad.

Oli is a known China acolyte.

Hence, the foreign ministry was asked to issue the statement to put a lid on further protests and anti-China sentiments gaining ground.

This is not the first time that Nepal, under its communist rulers, have meekly ceded territory to China.

Media reports four months ago detailed how Nepal had allowed China to occupy a village (Rui) in the northern part of Gorkha district bordering CoT.

China, according to reports (read this and this), has occupied strategic areas in four districts of northern Nepal.

China’s favourite tactic to enable its insidious salami-slicing has been to remove border pillars on Nepal’s side, redraw its own maps and then claim those Nepalese territories as its own.

Nepal’s communist rulers, who are beholden to Beijing, have naturally been completely silent and even tacit in Chinese occupation of their country’s territories.