Why Both Rohingya Muslims And Rakhine Buddhists Think They Are Right 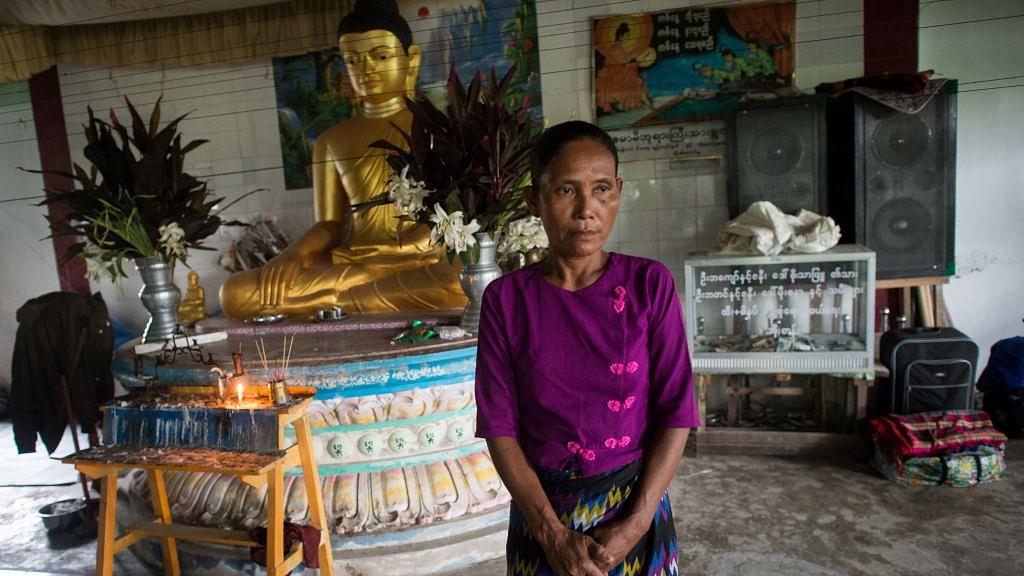 In this photograph taken on August 31, 2017 San Mae, 52, stands near a statue of Buddha at an internally displaced persons (IDP) camp in Sittwe. Rakhine, Myanmar’s poorest state, has become a crucible of religious hatred focused on the Muslim Rohingya, who are reviled and perceived as illegal immigrants in Buddhist-majority Myanmar. San Mae lives in Baw Di Kone in Rakhine State. This is the third time she has fled her village. (STR/AFP/Getty Images)

The plight of the Rohingya in Myanmar has yet again surfaced and momentarily captured international attention. Tens of thousands of Myanmar’s Muslim minority, residents of the western Burmese province of Rakhine, are fleeing across the border into Bangladesh to escape persecution. Typically, global attention has been fixated on ameliorating the immediate human tragedy while ignoring the deeper causes for the periodic unrest. As a result, there has been the inadvertent yet inevitable conflation of several fissures such as separatism, a fear of Islamism, and Buddhist nationalism; it has largely escaped notice that the Rohingya are often the targets of not just Myanmar’s military but also Rakhine Buddhists. The previous round of violence in 2012, for example, was precipitated by the military government’s move to grant many Rohingya citizenship (although the cassus belli was the gangrape of a Buddhist woman).

The latest spiral of violence began on August 25 when over 150 Rohingya terrorists launched a coordinated attack on a military base that housed the 552nd Light Infantry Battalion and 24 police stations across Rakhine. The predictable military reprisal has left tens of thousands homeless and some reports suggest that half the Rohingya population may have fled Myanmar. Two observations need to be made here: the first is the obvious that the roots of this violence go far back to even before Burmese independence in 1948, and the second is that the nature of the conflict has been shaped by external political realities and evolved over time.

Early Arakan was ruled by Indian kings and the province served as a launching point for Mauryan Buddhist missionaries on their way to Southeast Asia. The Muslim kingdom of Mrauk-U was established in 1430 with the help of the Bengal sultanate, though Islam is said to have reached the region by the tenth century. Arakan was only peripherally a part of the Burmese empire until 1784 when Mrauk-U fell to Bodawpaya of the Burmese Konbaung dynasty. However, a predominantly Buddhist socio-cultural milieu pulled Arakan in a manner that political suzerainty did not.

With the British annexation of Arakan into the Raj after the First Anglo-Burmese War in 1826 came the first modern waves of Muslim migration to avail of new agricultural opportunities. Returning local peasants who had fled the wars found that their land had been given away by the British to Bengali immigrants. So severe was the migration that Muslims, who constituted barely 10 percent of the population of Akyab (northern Rakhine) in 1869, were well over 33 percent by 1931. A 1941 British Report on Indian immigration noted with some concern that the rapidly changing demographics “contained the seed of future communal troubles” and had foreboding remarks on the Islamisation of Arakan.

World War II crystallised the cleavages between the migrant Muslims and the local Buddhists as the former sided with the British and the latter with the Japanese. By the end of the fighting, Muslims found themselves concentrated in Akyab while the rest of Arakan was held by the Buddhists. The brutality of modern war in the jungle created wounds between the communities that never healed and rumours began to surface that Akyab may be ceded by the British to Bengal to become part of the future state of (East) Pakistan than join Myanmar. There is no evidence this was considered seriously but both Archibald Wavell and Mohammad Ali Jinnah briefly flirted with the idea before turning it down.

Interestingly, Rakhine Buddhists, who are of a different ethnicity yet same religion from the majority Bamar, began an armed agitation for independence the same time the Rohingya were rebelling for a separate state in 1946. Yangon managed to remove the sting from these groups by the mid-1950s but over 50 armed ethnic groups remain in Myanmar and have been the targets of periodic offensives by the military. Many of the grievances of the Rakhine were resolved by the 1974 Burmese constitution; Prime Minister Ne Win’s Revolutionary Council renamed Arakan as Rakhine with the understanding that Myanmar is a federation of ethnicities. The same reforms rejected Rohingya appeals as it was argued that the term ‘Rohingya’ does not appear in any British document during their 122-year rule over Myanmar. The closest word to the term was ‘Rooinga,’ derived from Bengali and referring to geography rather than ethnicity.

In the 2010 elections, the Rakhine Nationalities Development Party won 35 of the 44 seats in the state legislature; it also became the second-largest bloc in the national House of Nationalities, which they have used to give voice to Buddhist concerns across Myanmar.

Such terms were not extended the Rohingya for a couple of reasons. The 1948 citizenship law clearly stated that only those whose ancestors lived within the borders of present-day Myanmar before 1823 would be eligible for citizenship, disqualifying the enormous wave of migrants that settled in Arakan under the British. While critics have argued that the 1982 law would have allowed a gradual, three-generation process of assimilation by recognising different classes of citizenship for those who moved to Myanmar before 1948 – associate, naturalised, and full – this was poorly implemented in the provinces due to the Rakhine fear of Islamisation among the Rohingya.

Reports have surfaced at regular intervals of ties between Burmese Muslims and Pakistani intelligence, al Qa’ida, the Taliban, and Saudi Wahhabists. Fearing the introduction of jihadist tendencies in their country, the Rakhine have campaigned hard – politically as well as violently – against bringing the Rohingya into the Burmese fold. In fact, there was uproar in Myanmar when the military-backed Union Solidarity and Development Party tried to grant citizenship to the Rohingyas prior to the 2010 elections to counter the success of the RNDP in the polls.

As Anthony Ware of Deakin University has argued, the Rohingya-Rakhine hostility can best be explained by Michalis Michael’s theory of a double minority complex. In such a situation, the majority in a country feel as if they are a threatened minority competing for territorial survival and nationalistic autonomy. The Rakhine feel overwhelmed by the constant and centuries-old religious and territorial encroachment by their Muslim neighbours, their own minority status with respect to the ruling Bamar majority, and the international media that is hell-bent on ignoring their concerns for the sake of political correctness.

The minority Rohingya view of history is that Arakan was never Burmese until 1784 and the Muslim Mrauk-U kingdom validates their claim to the region. According to the Rohingya, the population influx from Chittagong was not of new migrants but the return of Muslims who had fled Burmese occupation. With the demographic and military power balance skewed against them, the Rohingya feel intensely insecure in a Burmese national narrative they neither wish to partake in nor belong.

Although it is easy for outsiders to proffer solutions to the Rohingya imbroglio, this is ultimately a question for the Burmese themselves: for the Buddhists if they can live with their Muslim neighbours as part of their nation or at least imagine Myanmar as a multi-national state, and for the Rohingya, if they can let go of Islam’s perpetuity clause on real estate, its harsh exclusivity practices, and belong to an infidel nation without making demands for special considerations and rights. Even then, this question may continue to fester as Myanmar’s demographic composition alters and may have to be revisited in a generation. After all, democracy does not reward who is right but only who is more plentiful. In that case, all we would have accomplished is to kick another problem on to our descendants.