Why Exactly Did MEA Set Up A Chair In Urdu At Dhaka University, And That Too In The Name Of Tagore? 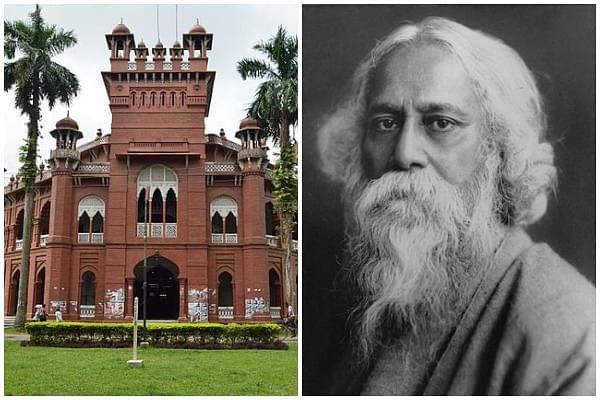 A few weeks ago, thanks to the diligent spadework by a young researcher named Priyadarshi Dutta, it transpired that the Indian Council for Cultural Relations (ICCR), an agency of the Ministry of External Affairs (MEA), had offered to the Bangladesh government a professorship of Urdu in Dhaka University that would be called the Tagore Chair, in memory of the great Renaissance figure revered in Bangladesh, India, and large parts of the world.

This was so surreal and bizarre that the vast majority of educated Indians would have rubbed their eyes in disbelief. A Tagore professorship in Urdu in Dhaka University – where many East Bengalis had succumbed to brutal police firing in the 1950s after they protested against the imposition of Urdu as the sole official language of Pakistan?

And did the ICCR top brass ever hear of the massacres perpetrated by the Pakistani army in the Dhaka University campus during the 1971 liberation war in their effort to “root out” the epicentre of Bengali culture and to impose the Urdu ethos of the Pakistani state?

Also, could any one of the babus in Azad Bhavan, the tony headquarters of the ICCR, come up with any connection or link whatsoever between Gurudev and Urdu?

In either case, the Government of India and the country found that a gigantic self-goal had been scored. Some would genuinely label it as hara-kiri, although they would hesitate to use this phrase because Tagore did indeed have a close interaction with the land of the rising sun.

All this mess underscores and reinforces what many observers and commentators, including this writer, have been saying for quite some time, ever since the new regime took over in Raisina Hill in May 2014. This is regarding the debate on how the powerful Indian oligarchy that ruled the country from 1947 onwards (barring a few years here and there) would do anything possible to protect their entrenched privileges and also to regain political power at the centre by any means, fair or foul (mostly the latter). This writer had written about the modus operandi of the Lutyens Zone coterie on Swarajya earlier.

We need to take a few steps back, so that we can assess the background of this latest fiasco that has hit the Government of India. Why and how has the Narendra Modi government been put on the mat so easily and conveniently in this case?

To seek meaningful answers to these and other similar questions, we have to analyse the role of our core institutions and their norms. For starters, we have to study the working of the country’s foreign service establishment, specifically the Indian Foreign Service (IFS) lot, and the working of the MEA as a whole. Just for the record, we continue to use the quaint colonial terminology “Ministry of External Affairs” even though we should have re-designated it as Foreign Ministry after 1947.

The IFS, along with their comrades in the Indian Administrative Service (IAS), is the crème de la crème of desi babus. The old specialists of Raisina Hill have confided in this writer that the ghost of Olaf Caroe, an old bandicoot of the Raj, who oversaw colonial India’s foreign policy, still hovers in the elegant offices of South Block where the MEA headquarters is to be found. Most of Caroe’s desi successors were also brown sahibs in the cultural and intellectual sense.

Along with many other commentators and observant citizens, this writer is convinced that the IFS, among all the branches of the Government of India, undoubtedly provides the cosiest and most comfortable lifetime employment that this country and its taxpayers can offer. It can be confidently confirmed that every IFS officer rises to the rank of Ambassador by the time she or he retires. It is not relevant whether HE (His Excellency or Her Excellency) is our “Ambassador Extraordinary and Plenipotentiary” in Burkina Faso.

This remarkable and unusual upward mobility has distinct post-retirement benefits – all these retired HEs flaunt the title of “Ambassador” before their names and pirouette around in Delhi’s salon circles and talking shops. This writer has been constrained to remind some of these characters that the only persons who are legally allowed to retain their ranks after retirement are members of the Indian armed forces. Readers can be pardoned if they have nightmares of other babus imitating the IFS lot and going around with titles like “Deputy Secretary” or “Under Secretary (Special Grade)” appended before their names.

Another characteristic of the IFS is that most officers and missions necessarily work far away from their head office and are, understandably, less subject to scrutiny and oversight. This makes the individuals and the offices cavalier about their responsibilities and functions. When it comes to assessing the character and performance of our foreign service, many analysts have voiced their concern whether the service, in fact, promotes the vital interests of our country in the global arena.

It is only the good life in foreign lands at the taxpayers’ expense that this lot seems to care about. The result is that we have a bunch of underperforming and overpaid babus whose professed task is to represent our country’s interests but who do nothing of the sort. There are honourable exceptions, of course. It would violate the laws of probability if this had not been the case. You get the gist.

How many of us during our travels in foreign lands have had occasion to seek the assistance of our diplomats for whatever problems or difficulties we have faced? If we have had to go through this experience, without the benefit of the presence of someone we knew or were referred to, this writer would wager his last rupee that we would have emerged sadder and wiser. Because, just inside the door from the main entrance where the tricolour proudly flies, is the stench of Indian babudom. From the top to the bottom, in every Indian diplomatic mission, all the talk you can hear is about the techniques of maximisation of personal benefits and privileges. Now, in Raisina Hill, this is par for the course and creates few ripples. In the great wide world outside our shores, these people are always under stringent scrutiny, not only by their host countries but also by the international community.

Many in the IFS lot have many serious queries to address. The conduct of some of them has been most questionable. Mani Shankar Aiyar’s convoluted antics have raised many hackles and caused revulsion. However, he has not really been called out or subjected to the scrutiny that he deserves, largely because he is a light-weight and an exhibitionist.

The same cannot be said about former foreign secretary Shyam Saran, principally because his own words in cold print exposed him cruelly. In an earlier article on Swarajya, this writer had occasion to discuss Saran’s stance on India vacating the Siachen glacier and giving up our most important strategic advantage over Pakistan.

Therefore, the issue of Tagore professorship in Urdu in Dhaka University should not come as a great surprise to people who have studied the IFS and the MEA. The basic nature of the beast is what causes these ripples and tsunamis. Students of history in these shores are throwing up some parallels that could come reasonably close to the inanity of ICCR’s frothing – a Molière professorship in Munich University, funded by the French government, for studies on Bismarck and Germany’s defeat of France in 1871 or, even better, a chair, funded by the Armenian government, in Istanbul University, on the genocidal Ottoman massacre of Armenians.

The most apt way to leave this dismal episode behind would be to fall back upon Lewis Carroll and Alice in Wonderland:

The Queen of Hearts: “Why, sometimes I’ve believed as many as six impossible things before breakfast.”