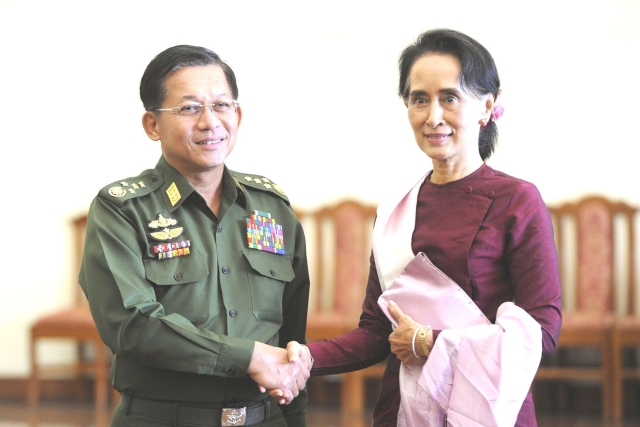 For the last three evenings since Monday morning’s coup by the Myanmarese military (called the ‘Tatmadaw’), a cacophony of sounds has reverberated throughout the country as a mark of protest against this renewed spell of military rule.

In response to a call by jailed leader Aung San Suu Kyi, lakhs of people across Myanmar banged on pots and pans, clapped and whistled while motorists honked car horns and cyclists rang their bells to create a raucous din that echoed throughout the country.

A senior editor at the online portal Democratic Voice of Burma told Swarajya over the phone from Yangon that the protests against Monday’s military coup are intensifying.

“People are wary of military crackdown on protests and have, so far, stayed away from showing dissent on the streets. But the popular form of protests by making a lot of sound started on Monday night and has continued,” said the senior editor, who did not want to be named.

Early Thursday (4 February) morning, the military blocked Facebook which was being used to plan and propagate protests.

Nearly 28 million people in Myanmar (more than half the country’s population) use Facebook and the military crackdown on the popular social media site came after students, government employees and medical professionals organised themselves into nationwide protests.

NetBlocks, which monitors Internet restrictions and outages across the world, said service providers in Myanmar were also blocking or restricting access to Instagram and WhatsApp, which are also owned by Facebook.

However, said Kyaw Kha, the chief reporter of the popular daily The Irrawaddy, the government’s efforts to block Facebook have been patchy. Many have also gone through virtual private networks (VPN) to circumvent the restrictions.

“It does not appear that protests will die down even if the Internet is shut down. Plans about protests will spread through word of mouth, as had happened so often during the nearly five decades of military rule,” said another senior journalist at the newspaper who did not want to be named.

Doctors and health workers in 70 hospitals and healthcare centres across Naypyidaw, the country’s new capital, Yangon, Mandalay and other cities and towns resigned from their posts and refused to work under the military regime.

The Myanmar Teachers’ Federation announced it would launch a civil disobedience movement while the All Burma Federation of Students’ Unions urged government workers to join nationwide protests it will launch this week.

Social media users changed the colour of their profile pictures to red to signal loyalty to Aung San Suu Kyi, who has now been charged with possession of illegally imported communication devices.

But the rising protests, and condemnations from across the world, has not fazed the military top brass. The Tatmadaw is, instead, putting in place measures and mechanisms to perpetuate its rule.

The military junta on Wednesday (3 February) reconstituted the Union Election Commission (UEC) with its handpicked members and supporters.

The UEC, declared the Tatmadaw, will conduct fresh elections. The Tatmadaw has said that last year’s elections on 8 November had been rigged and had alleged large scale fraud in the electoral rolls.

The UEC and Suu Kyi’s National League for Democracy (NLD), which won a landslide victory, rejected the military's allegations.

The Tatmadaw justified Monday’s coup on the grounds that the UEC and the civilian (NLD) government had not responded to and addressed the allegations.

It is now feared that the reconstituted UEC will rig the next polls to favour the Tatmadaw’s political proxy — the Union Solidarity and Development Party (USDP) — which won just 33 of the 476 seats in the two houses of Parliament to which elections were held in November last year.

According to the senior journalist in The Irrawaddy, the reconstituted UEC is headed by a former military judge advocate general, U Thein Soe, who also oversaw the discredited 2010 elections in the country.

The 2010 elections are alleged to have been widely rigged to hand power to the USDP. The NLD and other parties boycotted the polls citing unfair election rules.

There is widespread apprehension that U Thein Soe, a retired major general, will do a repeat of 2010 and will conduct rigged polls to put the USDP to power.

The Tatmadaw will then rule the country through its proxy. However, with anger building up against the Tatmadaw, it is only a matter of time before protests spill over to the streets.

That, say journalists, is likely to invite a military crackdown. Myanmar, thus, seems to be headed for a long spell of unrest and even bloodshed.

Also Read: Military Takeover Of Myanmar: China Suspected To Have Orchestrated Coup To Re-Establish Its Grip On The Country And Its Resources