Zimbabwe’s Mugabe is Gone, But What About His Enablers? 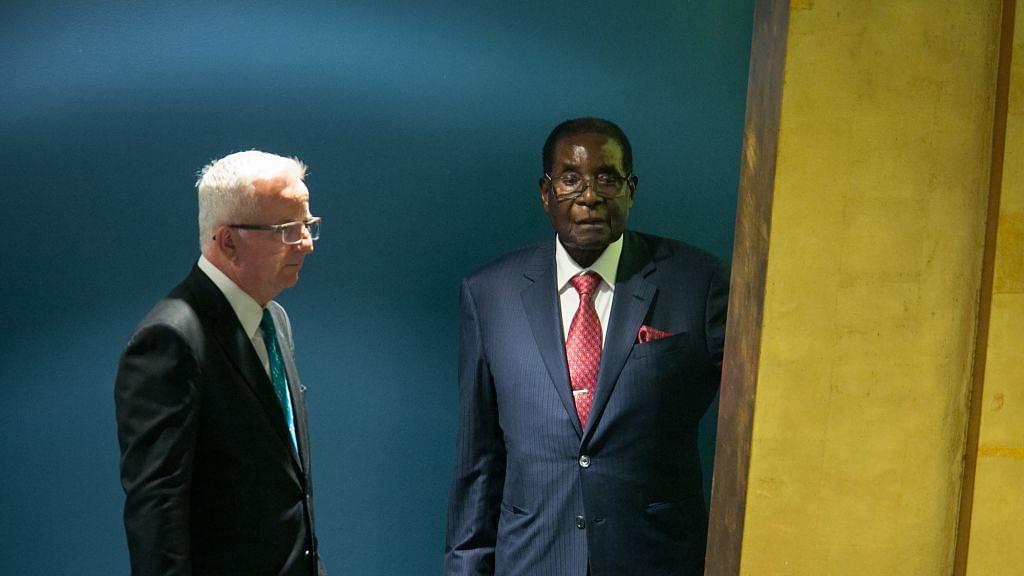 Detained by the same armed forces that had long helped keep him in power, repudiated by the very Zimbabwe African National Union-Patriotic Front (ZANU-PF) liberation movement-cum-political party he co-founded, facing hundreds of thousands of peaceful (even celebratory) protesters calling for his ouster, and confronting the prospect of a humiliating impeachment by parliament, Robert Mugabe finally resigned last week.

That paved the way for the swearing-in on Friday of Emmerson Mnangagwa, a longtime deputy whose sacking and attempted murder brought to a head the succession struggle that led the military to intervene on 14 November.

The end of Mugabe’s 37-year grip on the southern African country comes not a moment too soon. Leaving aside for a moment the dictator’s record of violence and human rights abuses and his systematic undermining of Zimbabwe’s democratic processes and civil society, the Mugabe regime’s economic mismanagement is breathtaking. Once the breadbasket of the region, Zimbabwe’s agricultural production has plummeted to the point where one third of the population requires some form of food aid simply to survive.

Even with between three and five million people (out of a population of just under 14 million) having already fled abroad, the unemployment rate is an astounding 90 per cent, according to the country’s largest labour union. In October, Zimbabwe entered the record books by hyperinflating for the second time in less than a decade (although the 348 per cent inflation rate measured at the time is nothing compared to the 89.7 sextillion per cent where it peaked in November 2008). Not surprisingly, the country’s stock market has slumped some 40 per cent since the current political crisis began two weeks ago.

Against this backdrop, it’s hardly a shock that Zimbabwe’s new leader, Mnangagwa, has sought to reassure foreign investors and other international partners in his inaugural address, promising compensation for commercial farmers whose farms were seized by Mugabe, warning that “acts of corruption must stop,” calling for policies “to attract foreign direct investment to tackle high levels of unemployment” while transforming the economy, and pledging that he would be “the president of all citizens, regardless of colour, creed, religion, tribe, totem, or political affiliation.”

Time will tell if he will live up to these commitments. Mnangagwa was, after all, Mugabe’s chief enforcer for nearly four decades until his recent falling out with his old boss over the efforts to supplant him as heir apparent with the latter’s deeply unpopular second wife. But the desperate need to pull the economy out of its death spiral may force a degree of pragmatism from the new leader.

All of this raises the question of how things got this bad in the first place. While Mugabe bears the primary responsibility for running Zimbabwe’s once-thriving economy into the ground and turning the country into a pariah state, it is only fair to acknowledge that he was empowered over the years by a succession of leftist sympathisers, dupes, and other fellow travellers abroad.

Many commentators opining on developments in Zimbabwe have referred to the electoral victory of ZANU-PF in the February 1980 election, which paved the way for independence two months later and the beginning of Mugabe’s rule. Few seem to know much, if anything, about the election held just one year earlier in March 1979. In that contest, 64 per cent of the black citizens of the then-Rhodesia voted, and two thirds of them chose Bishop Abel Muzorewa, a soft-spoken, United States-educated (he had won a scholarship to what is now Central Methodist University in Fayette, Missouri) United Methodist cleric, as prime minister.

Whatever its merits or demerits, that internal settlement was set aside by the United Nations Security Council where US president Jimmy Carter’s ambassador, Andrew Young, literally gushed with enthusiasm for Mugabe, whom he described to the Times of London in a 1978 interview as “so damned incorruptible” (a characterisation he did not take back even when he revisited Zimbabwe four years ago).

The Carter administration subsequently ignored reports from observers on the ground of massive voter intimidation, including one by future Undersecretary of State Richard T McCormack, an expert on racial politics in Africa, who discovered at one encampment “a whole corral of young girls…who had been kidnapped by Mugabe’s guerrillas” and whose parents had been told they would be allowed to return home only if he won the vote.

Mugabe’s boosters in Foggy Bottom (and at Whitehall) were caught up in the zeitgeist. Two years later, Africa Report, the bimonthly publication of the venerable Africa-America Institute that billed itself then as “America’s leading magazine on Africa,” carried Mugabe’s portrait on the front cover of its September-October 1982 issue. That publication also featured an exclusive interview with the then-Zimbabwean prime minister in which, among other things, he inveighed against alleged dissenters. Tellingly, Mugabe called them “a few dissidents,” while the editors of the magazine described them “renegade military elements.”

That latter formulation is pretty close to the term the Mugabe regime eventually settled on when, just a couple of months later, it sent the North Korean-trained Fifth Brigade into Matabeleland as part of the Gukurahundi (“the early rain that washes away the chaff”) campaign to crush ethnic Ndebele supporters of rival liberation struggle leader Joshua Nkomo, leading to massacres of what genocide scholars estimate to have been more than 20,000 civilians. To her credit, Africa Report assistant editor Margaret Novicki saw clearly where Mugabe was headed and told him “it is apparent that you envision a one-party state for Zimbabwe”—which he didn’t even bother to deny.

Despite the massacres and notwithstanding the steady beat of Mugabe’s persecution of anyone whom he thought crossed him—Canaan Banana, another Methodist minister who served as ceremonial president of Zimbabwe from 1980 until he ceded his place to Mugabe at the end of 1987, was tried on trumped-up charges of sodomy and sentenced to 10 years’ imprisonment—the encomiums kept coming in from overseas. The University of Massachusetts and Michigan State University were among the many institutions that conferred honorary doctorates on the Zimbabwean ruler long after he’d abandoned any pretense of democratic rule. The University of Massachusetts honour is especially ironic in that the chancellor at the time claimed that Mugabe was being honored for “his success in rebuilding his country’s economy” and for “having laid the foundation for racial harmony between blacks and whites.”

That it took the institution more than two decades of further depredation before it rescinded the honor in the aftermath of Mugabe’s violent repression of a pro-democracy group that had bested him in the first round of the 2008 presidential election probably says more about the ideological biases in American academia than it does about African politics. (Michigan State also revoked its Mugabe honorary doctorate that same year, leaving Morehouse College in Atlanta with the dubious distinction of being the only US institution to still have the ex-dictator on its rolls.)

While a few African leaders have broken ranks to call out Mugabe over the years—see, for example, Botswana President Seretse Khama Ian Khama’s eloquent public appeal last week to the Zimbabwean ruler—more often than not, the heads of state of the African Union (AU) closed ranks around one of their own. In 2008, for example, despite its own election observers concluding that “the election process fell short of the accepted AU standards,” the regional body seated Mugabe at its annual summit barely a week later. Not only that, but the AU went on to elect the Zimbabwean ruler its chairperson for 2015-2016.

Secretary of State Rex Tillerson’s expressed willingness to engage cautiously with the new government while still insisting on free and fair elections is the correct one: it is in no one’s interest that Zimbabwe collapse more than it already has. And thanks to the Zimbabwe Democracy and Economic Recovery Act, a bipartisan piece of legislation signed by president George W Bush in 2001, the Trump administration has both clear benchmarks for progress outlined and considerable leverage with Zimbabwe’s new leaders (both Mnangagwa and military chief General Constantino Chiwenga are still on Treasury Department sanctions lists). They just need to avoid paying any heed to those whose ignorance, wilful or otherwise, enabled Mugabe to drive Zimbabwe down the path of ruin for so long.
This article was first published on The American Conservative and has been republished here with permission.

Peter Pham is vice president of the Atlantic Council and director of its Africa Center.