Tibet: Xi Jinping Tours Border Areas Close To Arunachal Before His First Visit To Lhasa Eight Years After Taking Over As President 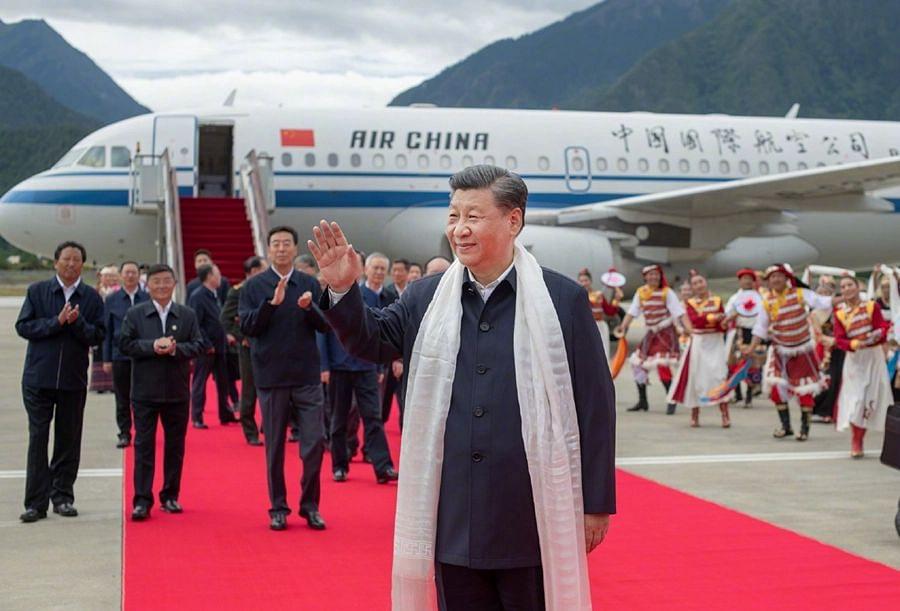 Xi arrived in Tibet on Wednesday (21 July), landing at the Nyingchi Mainling Airport, which is located at a distance of around 20 kilometres from Tibet's boundary with India in Arunachal.

Before leaving for Lhasa, Xi visited the Nyang river bridge to inspect Yarlung Zangbo River, called Brahmaputra in India, and its tributary Nyang. The Chinese Communist Party's (CCP's) 14th Five-Year Plan (2021-2025) proposes the construction of a dam on the lower reaches of the Yarlung Zangbo river, or at the Great Bend, where the river turns sharply and enters Arunachal Pradesh.

The Chinese President also visited the Nyingchi railway station to inspect the Sichuan-Tibet railway line, and then took a train to Lhasa.

"Xi went to Nyingchi railway station, learning about the overall designing of the Sichuan-Tibet Railway and the operation of Lhasa-Nyingchi railway section, and then took a train to the regional capital Lhasa. He inspected the construction along the railway during the ride," a report in the China Daily said.

The 1,600-km long Sichuan-Tibet rail line will link Lhasa on the Tibetan Plateau with Chengdu in central Sichuan. In June this year, China had opened the 435-kilometre-long section of the line between Lhasa and Nyingchi.

Nyingchi, a town opposite India's Tuting sector, in the Upper Siang district of Arunachal Pradesh, is only 40 km away from the border, and the Nyingchi-Lhasa rail line itself runs much closer to the border than that at some points.

The 52nd and 53rd Mountain Infantry Brigades of the CCP's People's Liberation Army are based in the larger Nyingchi Prefecture.

China has also built a 250-kilometre-long highway linking Nyingchi with Lhasa, which, like the Lhasa-Nyingchi rail line, runs close to Arunachal.

Construction of the Lhasa-Nyingchi rail line, nearly 75 per cent of which is either over bridges or under tunnels, began in 2015, and track laying was completed over five years, in December 2020, at a cost of $4.8 billion.

The remaining 1,100-km long section of the line, a part (Chengdu-Ya’an section) of which is already complete, is expected to be ready by 2030. The headquarter of China’s Western Theatre Command, which is responsible for the frontier with India from Arunachal to Ladakh, is located in Chengdu.

The Lhasa-Nyingchi rail line project has received consistent attention from the top echelons of the CCP in the past, including Xi himself, who linked it to ‘border stability’ as recently as November 2020, during the standoff with India in Ladakh.

Although the dominant narrative in the Chinese state media about the Sichuan-Tibet rail line project is linked to economic development on the Tibetan Plateau, the CCP apparat has pointed out that it will act as a “fast track” for the “delivery of strategic materials" to Tibet "if a scenario of a crisis happens at the border".

Xi's inspection of the project, in the middle of a tense border standoff with India, has brought focus back on this aspect of infrastructure development in Tibet.

The construction of rail lines and highways on the Tibetan Plateau line will not only ease the movement of troops within China’s Western Theatre Command but also enable the PLA to bring trainloads of troops and equipment from other theatres in a very short time, a scenario that can’t be ruled out after China’s massive mobilisation along the Line of Actual Control in eastern Ladakh in 2020.

On 22 July, Xi was in Lhasa for his first visit to Tibet's capital as President of China. He last visited the town in 2011, when he was vice-president.

Xi's visit to Lhasa comes just weeks after the Chinese Communist Party (CCP) marked its centenary, and nearly two months after it celebrated the 70th anniversary of the "peaceful liberation" of Tibet, which was invaded and occupied by communist troops in 1950. The grand official celebrations of the event are scheduled to take place during Xi's visit.

During his visit in July 2011, the Chinese state-owned media said he was in Lhasa to "attend a series of celebrations marking the 60th anniversary of Tibet's peaceful liberation". China celebrates the anniversary of the takeover of Tibet by communist forces on 23 May every year.

Speaking at a conference in Lhasa on 19 July 2011, Xi had vowed that China will "completely destroy any attempt to undermine stability in Tibet and national unity of the motherland".

"We should fight against separatist activities by the Dalai group by relying on cadres and people of all ethnic groups," Xi noted.

"People of all ethnic groups in Tibet have stood firm in the fight against separatism. They have forestalled separatist and sabotage activities staged by the Dalai group and foreign hostile forces, and firmly safeguarded ethnic unity, social stability and national unification," he said back then, adding, "We should stick to the idea that Han and ethnic minorities cannot live without each other", and "consolidate and develop the harmony and stability in Tibet".

Under Xi, the CCP has focused on improving control over Tibet's boundary with India and the sinicisation of Tibetan Buddhism to suppress the influence of the Dalai Lama, who is living in exile in India.

Interestingly, Prime Minister Narendra Modi had wished the Dalai Lama on his birthday earlier this month, in the middle of a tense military standoff along the Line of Actual Control in eastern Ladakh.

In a departure from the past, he has publicly acknowledged wishing the Tibetan spiritual leader, who has been accused of "terrorism in disguise" by Beijing.

(Read: In Modi's Birthday Call To The Dalai Lama, A Message To China)

To improve control on the boundary, China has been building over 700 border defence villages along Tibet's frontier with India and Bhutan.

Ahead of the celebrations marking the 100th anniversary of the founding of the CCP in July, President Xi had awarded the July 1 medal to a Tibetan herder named Zhuoga (resident of the Yumai village near Tibet's boundary with India's Arunachal Pradesh) whose story served as the model for the launch of the Xiaokang border defence villages programme.

In these villages, the CCP is settling people not only from the Tibetan ethnic community but also Han Chinese in order to dilute the Tibetan culture, in line with what Xi said during his visit to Lhasa in 2011.