41: A Malayalam Movie Woven Around Sabarimala Leaves The Communists Of Kerala Exposed 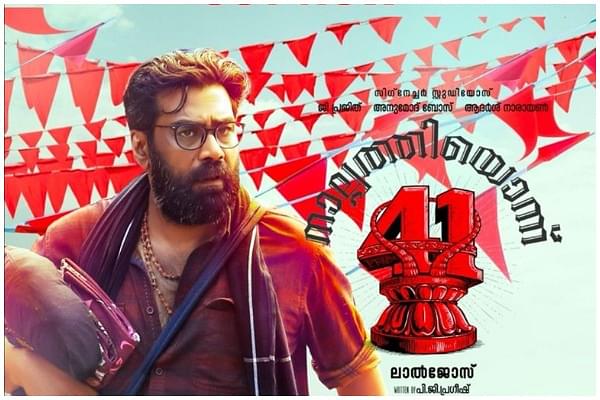 A poster of the movie. (LJ Films/Facebook)

Probably, Nalpathiyonnu or 41 --- the Malayalam movie --- may have wished to court some controversy like the Tamil film Mersal did in 2017.

Unfortunately, the people and politicians of Kerala are a little smarter and more balanced. The film, per se, seems to be non-controversial but it has enough material to court controversy.

Nalpathyonnu is a satire on the life of a Kerala communist, who is also a hardcore rationalist, with ample hilarious incidents thrown in.

The story, directed by noted filmmaker Lal Jose, is a simple one set in Chekkunnu village in Malappuram district. Ullhas Kumar (neat performance by Biju Menon), a teacher in the village, is a rationalist and a communist to the core following his party’s principles to the T.

He doesn’t even want to compromise his rationalism during his wedding leading to a walk-out by the bride (played by Nimisha Sajayan, who hasn’t got much to do in the movie).

Now, Ullhas wants to reform his alcoholic comrade, Vavachi Kannan (a stunning performance by debutant Saranjith). The party unit decides that going to Sabarimala and observing the 41-day ritual is the only way to make Vavachi quit drinking.

The party unit also resolves that since Ullhas wants to defend Vavachi from the party’s disciplinary action, he would have to accompany the latter to Sabarimala as the latter has health problems.

What happens when they undertake the 41-day ritual and take the long trip from Kannur to Sabarimala forms the rest of the story.

The opening scene of the film is hilarious with Ullhas pretending to be a Hindu saint trying to sell his book “A Merchant called God” on rationalism.

Director Lal Jose leaves no one in doubt that rationalism is part and parcel of Communism through Ullhas and his comrades. However, he also exposes the hypocrisy of Communism, showing the villagers of Chekkunnu, who are all party members, going to caste gatherings and temples.

There are two interesting scenes that are ironical and leave the viewers to draw their own conclusions.

One is the discussion among the village elders of how Chekkunnu village derived its name. An elder relates it to Hindu Gods but another has a hilarious comment that it got the name after the Argentine Marxist revolutionary, Che Guevera.

The second is the celebration of Onam, with one comrade putting up a poster terming it as “Vamana Jayanti” (The Right-wing want Onam to be called Vamana Jayanti). A humorous statement is made over here: “Let’s have it this way, whether the lotus blooms or not.”

Ullhas points to a party resolution to say that Onam should be called the “harvest festival”. The irony is not lost when during the presentation of awards for different competitions during the festival, the winners are all referred to with their caste names.

In yet another part of the movie Ullhas offers to help Vavachi's wife Suma (Dhanya lives the role) to maker her husband quit his drinking habit. As he waits in the dark to handover the medicine without Vavachi’s knowledge, the whole neighbourhood comes together and calls the party leader, suspecting Ullhas of adultery.

With this scene, Jose seems to be pointing at incidents involving some communists leaders' actions that have taken place in the recent past. Vavachi, however, salvages the situation, saying that he trusts his wife and knows that she cannot be unfaithful to him.

The movie isn’t just ripping off the mask of communists. It has characters like Ravi Nambiar, an Ayyappa devotee, who takes over the mantle of leading the party in the village. It is Nambiar who comes up with the plan of sending Vavachi to Sabarimala to cure him of his alcoholism.

Is Jose questioning why the Communist Party has decided to send its comrade to Sabarimala to quit drinking?

The movie also exposes the underbelly of Communism, when the movie gets serious with its business. An attempt is made on Vavachi’s life by a group of men. That tells us how certain cases are "fixed" in the land of communists.

“See, the party may have helped you to escape the murder keeping in mind your wife and your visually-challenged girl. We could have made someone else undergo the punishment you have, but the rival group knows who the real murderer is,” says Ravi Nambiar to Vavachi.

Vavachi argues that he had committed the crime for his party’s sake and it is duty-bound to protect him. And he gets Ullhas backing for this stance.

Then begins the 41-day ritual to visit Sabarimala. Although Ullhas agrees to accompany Vavachi, his rationalist moorings don’t allow him to chant “Swamiyae Sharanam Ayyappa".

And yet he wears a white dhoti and the Thulasi (Basil) garland that signals the start of the ritual. But as a rationalist Ullhas doesn’t wear the traditional black dhoti; instead he prefers to wear a saffron one. (Is the director telling the viewers that saffron has entered without the communists even taking note of it?)

The scenes of the protagonist having to follow the rituals are amusing, especially one scene where Ullhas is shown blocking his view from the plate of a colleague who eats non-vegetarian food.

On his way to Sabarimala, Ullhas takes some time to visit the Punnapra-Vayalar Martyr’s column, a memorial of the 1947 Communists uprising in the princely Travancore State.

This scene is hilarious since the protagonist lifts his left elbow with pride at the memorial but at the same time, he has his Irumudi --- the bag that Ayyappa devotees carry with coconuts, ghee and rice --- firmly on his right shoulder.

These incidents are supposed to have happened before the recent controversy over women’s entry into the Sabarimala temple broke out. The director makes this clear by including a stampede scene during the Makara Vilakku, which actually happened in 2011 resulting in the deaths of 106 devotees.

Lal Jose has used the stampede intelligently to probably expose the rationalist before he ends the movie. A few reviewers say that the director has straddled the middle-path but a closer look should make things clear.

While there is no doubt that Jose leaves the rationalist exposed, one might term it as a humane expose. The director prepares the viewers with several leading incidents before Ullhas and Vavachi land up at Erumeli, probably to show that the hero has adopted a humane approach to justify his end.

Through Vavachi, Jose exposes some of the unholy acts of a few Ayyappa devotees. But he allows the comrade to explain the reasons for them consuming liquor. And though Ullhas is portrayed as a staunch rationalist, he is also seen as the one who cannot tolerate the unholy acts of Vavachi during the pilgrimage.

In the end, the rationalist continues to be so but for the viewers, he appears as one who has taken advantage of the system. And when his bride comes back, isn’t it the fruition of his pilgrimage to Sabarimala? Whither rationalism?

Lal Jose, making a comeback after a hiatus may have left the viewers wondering over a few questions. But make no mistake: 41 exposes the smartness of rationalists and the underbelly of Communism.

The happenings at Chekkunnu village with its obvious overtones of caste equations, the party's decision to send its cadre to Sabarimala, its confession of protecting the real culprit, the protagonist wearing the saffron dhoti instead of the traditional black, his visiting the martyr’s memorial with the Irumudi intact, and his taking advantage of the system, all leave the rationalist communists exposed.

Lal Jose prefers to leave viewers to ponder on these incidents than explain them on the screen. The problem, though, is a weak screenplay.

This movie can be remade in Tamil, probably exposing the so-called Dravidian rationalists and other parties that have sprung up with such principles. The million-dollar question, however, is: will anyone come forward and adapt it to the Tamil Nadu scenario?