As Anti-CAA Protesters Try To Use National Anthem To Virtue-Signal, A Look At Deep Hindu Symbolism In Tagore’s Poem 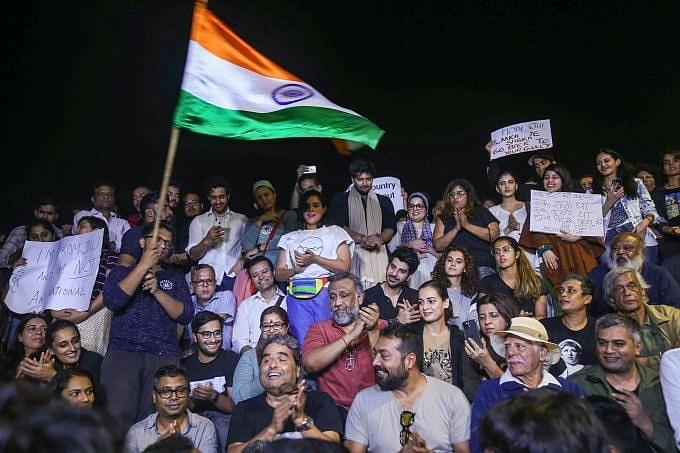 A part of the complete Vande Mataram was chosen as the "national song" in 1937 by the Indian National Congress as it was fighting for independence from the British Raj.

Keeping in mind the Muslim sentiments, only initial two paragraphs were selected, and the latter ones with references to Hindu goddesses Durga and Lakshmi were expunged.

During a controversy over the song recently, many Left leaders and intellectuals had quoted a letter from Tagore to Bose sent in 1937, the same year, to show that Tagore had himself said that Muslims couldn’t be expected to sing Vande Mataram.

This is half-truth. Tagore had cited his contention in reference to the complete poem from Anandmath, which contained the names of the goddesses, not only the first two stanzas.

It is important to note that the demand of the Muslim League as well Jinnah was also that the two stanzas with reference to the Hindu deities be removed, and this demand was fulfilled.

After this, with the agreement of Tagore himself, in 1937, on the initiative of Mahatma Gandhi and Jawaharlal Nehru, the first two paragraphs of the poem were adopted as the ‘National Song’.

Tagore has himself expressed his satisfaction at this:

“To me the spirit of the tenderness and devotion express in its first portion, the emphasis it gave to beautiful and beneficent aspects of our motherland made a special appeal, so much so that I found no difficulty in dissociating it from the rest of the poem and from those portions of the book of which it is a part..”

One would assume that since only two paragraphs were taken with the the leaders of all hues on board, and the fact that Vande Mataram played a historic part in the struggle for Indian freedom, there would be no space for any more controversy.

This was not to be.

A Faizur Rahman, in a Hindustan Times article says:

“Based on this [1937 Congress] resolution, it is argued that Muslims should sing the first two stanzas because there is nothing wrong in bowing before one's motherland.

But the first two stanzas cannot be seen in isolation by detaching them from the main song, particularly when the "motherland" referred to in those stanzas has been clearly identified as Durga and Lakshmi in the fourth stanza”.

Rahman notes, “the Muslim viewpoint is that Islam, being a monotheist religion, forbids the apotheosis of any deity, animate or inanimate, except God, the supreme creator”.

Interestingly, Amar Shonar Bangla, which is adopted as the national anthem by an Islamic nation, calls the land of Bengal “O Mother!” multiple times.

Does the above description of Vande Mataram by A G Noorani also apply to Amar Shonar Bangla?

"[In Vande Mataram], the land of Bengal, and by extension all of India, became identified with the female aspect of Hindu deity, and the result was a concept of divine Motherland. How secular is such a song?” asks Noorani.

What if the same standards of secularism are applied to Jana Gana Mana?

It is contended that the ‘Mataram’ in Vande Mataram, looking at the whole poem, is clearly a Hindu diety.

In the first two stanzas, Tagore covers the whole land of the Indian subcontinent, as well as different religious groups.

The first two lines of the next stanza hints that the Bhaarat refereed to in this poem has been in existence since Yugas (ages) - and is not just a political territory that British brought under one rule. Tagore also mentions that this India has survived many ups and down :

In the very next line, he refers to the Bidhata as ‘chirasarathi’ - the eternal charioteer. This is a reference to Sri Krishna, who became the sarathi of Arjuna on his request in the Mahabharata.

The metaphor of Krishna as sarathi of Arjuna is seen as the Narayana (the ultimate) himself guiding the Nara (human beings) through the ups and downs and difficulties of the samsara.

And if this doesn’t make it clear, look at the next line:

“In the midst of Daruno (utter) biplōbo (misery, it also refers to a flood that drowns everything, samsara is often referred to as bhavasagara in which one drowns), the sound of your shankha (conch shell) rings loud, and saves us from fear and misery”.

The image of Sri Krishna and his conch shell marks the victory of Dharma (righteousness) over Adharma. In the next line, Tagore refers to “Janaganapathaparicāẏaka”.

In the next stanza, Tagore refers to the loving mother (“Snehomoyi tumi mata”) who protected her children in the darkest of the times, with her “Nōtonōyone ōnimeshe” (constant gaze with beautiful eyes). In Hindu literature, deities are referred as ‘Animesh’ - those who don’t have to blink their eyes.

At this point, it is also important to remember that Krishna and Kali are understood to be one and the same in Hindu literature, one is the masculine, while the other is the feminine representation of the Supreme.

It is also mentioned in Devi Bhagwata, that while Kali herself is Krishna in the male form, to accompany her, Shiva takes the female form of Radha. In a beautiful 1882 print, Radha is shown worshipping Krishna in the form of Kali. The three most important Kali temples in Kolkata– Kalighat, Adyapith, and Dakshineswar– all contain subsidiary shrines dedicated to Radha-Krishna.

Krishna and Kali, both deities often appear together in Bengali devotional practice. Legendary Bengali Bhakti poets like Ramprasad Sen (a Shakta sadhaka of 18th century) have written beautifully about this unity.

Therefore, it is no surprise that both Krishna and Kali symbolically appear in Bharoto Bhagyo Bidhata.

In the last stanza, Tagore calls to “rajeshwōro” - rajarajeshwara - the king of the kings, also a name of Shiva (a famous temple dedicated to rajarajeshwara is in Thanjavur). and writes that due to his compassion (“korunaruno rage”), Bharata is awakening to a new dawn.

This description is also very similar to the metaphors of the start of the cycle of creation after pralaya - presiding over this process is Kaleshwar - or Shiva, the master of Kala (Time), or the Timeless.

Do the above references make Jana Gana Mana like Vande Mataram, incompatible with secularism?

Some may point out to the fact that the contexts of the two are different. However, it cannot be denied that Jana Gana Mana - in its full version - contains references to the Hindu imagery that is, in essence, similar to that of Vande Mataram.

The truth is several major events of the national movement, as well as the tallest leaders of the freedom struggle will not survive the acid of this kind of the conception of secularism.

“Mutual understanding will lead to the Gandhian formula - respect for the song but no imposition. But even more than that, if the problem were understood in depth, what would emerge is a far better appreciation of the reasons why the Muslims and the Congress drifted away from each other [the reference is to Partition]. Those reasons have many a lesson for us today as we build a secular India”.

If the problem were understood in depth, what would emerge is the that one cannot change someone’s bad behaviour by rewarding it more.

Partition was not about Gandhi and Nehru not being secular enough. It was about the other side being communal enough.

We need to stop blaming self for the choices the other side made for their own reasons- grounded not just in politics, but in the history- that gave them a sense of martial, administrative as well as religious superiority, and created a disproportionate appetite for power.

The path Pakistan took after its independence itself debunks the theory that Muslims (from Noorani’s “Muslims and the Congress”) did what they did merely as a reaction to the fear of being under Hindu domination.

If that were the case, why Pakistan, free from the fear of Hindu domination after its formation, continued on the path of Islamisation?

If Gandhi, Nehru and all others bent more backwards, the best we could have had was a united Pakistan, not a united India.

One should be free to refuse to sing either Jana Gana Mana or Vande Mataram.

But an inquiry into the motivations behind refusal is instructive. Resistance for the resistance’s sake is meaningless. Resistance for the sake of a principle raises the question whether the principle applies universally, or to only one side? Is it a standard that even Gandhi, Nehru, and Tagore failed to qualify?