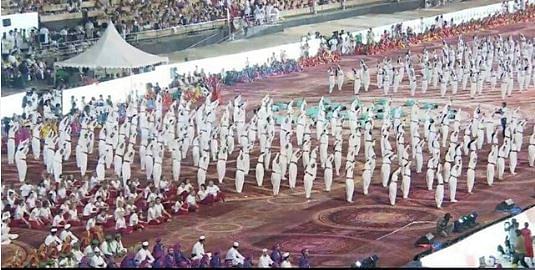 Former prime minister Indira Gandhi had a deep interest in spirituality. Often, she would take part in the Rudrabhishek performed at the house of Kamalapati Tripathi, her trusted lieutenant and a senior Congress leader. She would also visit various ashrams and mutts for receiving the blessings of saints and gurus. She would often be seen with Anandamayi Maa for darshan and blessing.

However, times have clearly changed since Indira Gandhi’s passing away, with her party members seemingly indifferent to such pursuits. A case in point is that of the World Culture Festival (WCF) organised by the Art of Living (AOL).

As an apolitical organisation, the Art of Living has always welcomed people from all parties. However, the Congress and a few other parties seem prejudiced against it. Thus, when the Art of Living trustees went to invite Congress president Sonia Gandhi and vice-president Rahul Gandhi for the WCF last year, they couldn’t meet the leaders, and had to leave the invitations at their offices.

When AOL volunteers went to invite various Congress party members for the programme, they indicated that the programme may not happen at all (yeh toh hoga hi nahi). One learns that some Congress leaders even called up some international dignitaries and asked them to not attend the programme.

While members of ruling and Opposition parties of several countries attended the festival, the Congress and some other parties in India displayed their narrow-mindedness by not attending the WCF, and missing an opportunity to connect with the world. Little did they realise that they handed over the benefits of the programme entirely to the Bharatiya Janata Party (BJP) government.

Additionally, some politicians tried to obstruct the event by bringing in rowdy elements to the venue. A few tutored farmers who owned no land in the area came on camera and sat on a so-called dharna. This fake dharna was led by Congress leaders Ajay Maken, Sandeep Dikshit, and President Pranab Mukherjee’s daughter Sharmistha Mukherjee.

Some autorickshaw drivers revealed to some AOL volunteers that Congress workers had hired many auto drivers to create chaos at the WCF gates by faking malfunctions and creating traffic jams to prevent the public from attending festival. However, a vigilant Delhi Traffic Police, equipped with a number of tow-away cranes, did not let this happen.

The then Lt Governor of Delhi, Najeeb Jung, who was also the chairman of the Delhi Development Authority (DDA), also had a hand in some of the disturbance generated. A right to information reply revealed that the DDA under him awarded a large grant of Rs 10 crore to the DDA-funded and Delhi University-run Yamuna Biodiversity Park, which is headed by Prof C R Babu. This was way above the average number of grants provided in the last five years

Babu, who is a member of the National Green Tribunal (NGT) expert committee, assessing alleged damage to the Yamuna by the WCF, gave a misleading report against the AOL.

(Babu’s Biodiversity Parks programme is also clouded by controversy as no internal audit has been conducted since its inception in the year 2003, despite receiving over Rs 40 crore in grants from the DDA)

Interestingly, a Congress-backed legal team is now fighting the case against the AOL in NGT.

The Hindustan Times, an English newspaper that is seen to be aligned to the Congress party, alleged that there was a dead man on the reception committee of the festival, an apparent reference to the co-chair, former UN secretary general Boutros Boutros-Ghali, who had passed away less than a month before the event. The paper even portrayed a pile of garbage being collected by volunteers and waiting to be picked up by the disposal truck as the ‘art of littering’ by the AOL!

A senior journalist had remarked at that time that the AOL had got caught in the political crossfire in Delhi, hinting that the actual target was the BJP government. A few in the media had also noted how Prime Minister Narendra Modi was surely aware of this sinister politics. It is possible that the main target was Prime Minister Modi and his international reputation, and not just the AOL.

The Congress party does not seem to care that events like the World Culture Festival bring together millions of people from all over the world and this can happen only with the blessings of the divine. It missed out on a wonderful opportunity to be part of something much bigger than politics.

(The author is director, Art of Living. Twitter handle: @gautamvig)