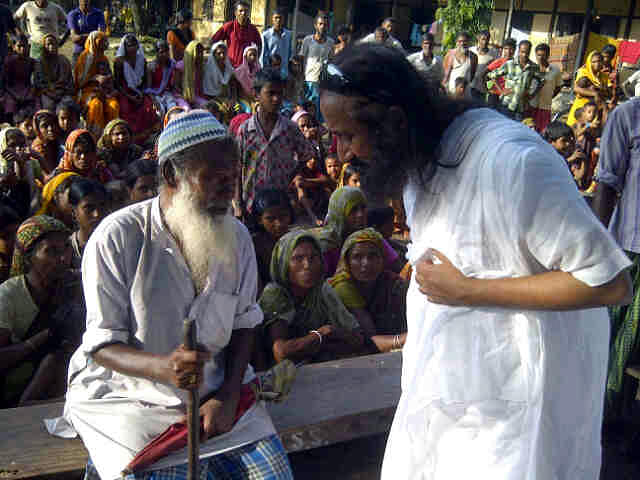 Sri Sri Ravi Shankar visiting the Basugaon camp for Muslim refugees during the Bodo-Muslim riots in 2012.

Recently, some sections in the media have twisted the remarks of Art of Living founder Sri Sri Ravi Shankar over the Ayodhya issue, branding him anti-Muslim, while also accusing the spiritual leader of indulging in fear-mongering.

It is quite absurd to hear that Sri Sri is against Muslims. If that were indeed the case, why would the Art of Living and its sister organisations get involved in trauma relief work and provide aid in the form of food, water and shelter in the conflict zones in Iraq, Jordan, Lebanon, Palestine, Syria, etc.

In fact, within India also he is the only Hindu spiritual leader, who has consistently provided aid and trauma relief courses in Muslim riot relief camps in Assam, Gujarat, Muzaffarnagar, etc after communal violence split those societies apart. Sri Sri personally supervised relief work in many of these places and worked day and night to mobilise aid in the form of food, medicines and doctors. On his request many doctors from Chennai, Mumbai and other places took leave from their thriving practices to provide medical relief at these camps.

In his interviews, Sri Sri has discussed the possible outcomes of the Supreme Court decision and their impact on India. He said the court ruling will be in favour of one community and the other will feel hurt. Sri Sri has been trying to avoid precisely this unpleasant situation and is trying to ensure that there is no hurt on either side, and a win-win situation for both communities.

His interviews have been distorted by certain sections of the society that are against peace and harmony and have a vested interest in creating and sustaining communal conflict. These are the people who have been spewing venom. They are behaving as if their survival depends on such conflicts. These elements need to be tackled firmly by those that value human life and are in favour of protecting every human life that may be lost due to the escalation of this centuries old communal conflict.

These very people are also accusing Sri Sri of trying to influence the Supreme Court’s judgement. They are forgetting that the Supreme Court itself has suggested an out of court settlement! It is Sri Sri who has taken this suggestion of the honorable court seriously in letter and spirit and that a person of his stature has staked all his goodwill for the sake of communal harmony, humanity and progress of our nation. Therefore, suggesting that the spiritual leader is in contempt of the Supreme Court is absurd. It is appalling that these people lack common sense at best.

Distorting Sri Sri's observation about Syria also shows a lack of understanding of history. There are ample examples of ideological and religious disputes in present times that have been nursed and nurtured over decades and centuries by one religious or sectarian group against the other. Most have resulted in bloody wars with massive and deplorable impact on people, cultures and economies. The dispute of Ayodhya is itself over five centuries old and still evokes a massive emotional response.

By making controversial remarks about Sri Sri intentions, such people are inciting the emotions of millions of people who are following the Art of Living.

The very purpose of filing an FIR against Sri Sri by All India Majlis-e-Ittehadul Muslimeen chief Asaduddin Owaisi is to ignite passions so that millions of people who revere Sri Sri will get agitated, but it is not going to happen. Sri Sri believes that people are wise today and that humans can rise above conflict if their higher, nobler self is appealed to.