In Another Universe: The Rising Yazidi Majoritarianism 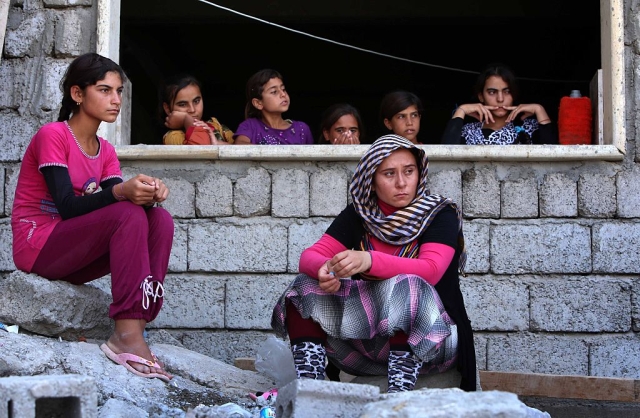 The mood was somber at the History Department at the Priyanka Gandhi University, India’s second-best university for liberal arts.

Built in 2037 along the lines of the Jawaharlal Nehru University, the university rose to prominence over the following decades.

By 2110, it had risen to be the second-best university in India, offering a holistic liberal arts education.

The university had succeeded in successfully resisting and dismantling the hegemony of logic, facts and reason. Despite mounting pressure, the faculty had kept the engineering and science disciplines out.

The university must not sway from its mission, argued the faculty, given in its motto, “Dedicated to the service of the subaltern narrative.”

By laying emphasis on the supremacy of narrative over facts, the university attracted scholars from various postmodern disciplines such as gender studies, sociology, anthropology, and African art history to the university’s beautiful campus, located on the outskirts of Shimla.

And yet, today, on 7 August, 2135, the atmosphere was gloomy. A lot had happened over the past 100 years. There are differing accounts of the events around 2005-2030, but most eminent Indian historians had converged on the sequence of events through meticulous scholarship extended over decades.

The period of 2005-2030 was marked by violent conflict in the Arab world. Numerous propaganda websites and fake-news outlets had claimed that an organisation called “Islamic State of Iraq and Syria”, in short ISIS, had taken control of parts of Iraq, a country ravaged by fascist and imperialist American forces in 2005, and were targeting ethnic minorities like Yazidis.

Fake news websites claimed that the rebel warriors who were resisting the imperialist forces, committed a genocide.

Pliant media bought these insinuations, CIA doctored videos of the warriors blowing up ancient temples. The scholars — those who persevered through the extraordinarily difficult coursework of 9th century African art history and gender studies — examined all of these videos and concluded that the videos were doctored.

After three decades of scholarship, they concluded that floods, earthquakes, and climate change had caused the temples to fall. The rebels certainly did not destroy them.

“This is divisive Yazidi propaganda”, said the scholars.

And yet, Islamophobia won the popular discourse. Several political leaders from failed democracies — countries not ruled by intellectuals — were swayed by the propaganda and decided to wage a war against the rebels.

The charade of 'saving Yazidis' was put up as a shoddy excuse in sending forces to Iraq and Syria. The truth, as the scholars claimed, was that Yazidis were a 'divided society'.

Arab rulers, over centuries, had allowed them the freedom to practise their religion. But, by late 2000s, the Yazidis were emboldened by the fall of Saddam Hussein, a hero for many in the Arab world, and started demanding a separate country.

Finally, the rebels resisted and a war ensued. The rebels fought with courage and defeated the barbaric Yazidis.

The Yazidis, embarrassed by the defeat, left the country voluntarily. Just like the Hindus in Afghanistan, Pakistan, Bangladesh, Cambodia and Indonesia.

But, the chest-thumping intoxicated masses are not intellectuals. Incapable of critical reasoning, they consumed all the fake-news of rebels destroying ancient temples, committing a genocide, rapes and murders.

The Yazidis, along with the imperialist forces of America, France, UK, and other similar countries, mercilessly butchered thousands of rebels.

They did not spare even women who had moved to Syria from US and UK, hoping for a better, a just, and a simple world. They killed them all.

They fought for a decade for getting a separate country. Emboldened by the support of the imperialist forces, they did not want to stop at anything less.

The fundamentalists claimed that only in a separate nation will they be allowed to practise their religion freely. India was gaining a foot in the door in global politics around then, and was being ruled by a xenophobic bigot Narendra Modi — the man who changed the idea of India.

Modi championed this cause in the United Nations — a farce of an international organisation, an organisation that had systematically targeted the Communist and Islamic countries for daring to create a better world.

The world obliged, and in 2031, a small Yazidi country called Yazid was carved out by confiscating some land from Iraq and Syria.

The bloodthirsty Yazidis were hardly satisfied. Immediately after getting independence, they launched a movement to restore some of the lost temples, temples that had fallen due to global warming.

The Yazidi fundamentalists — empowered by their doctored history that was propagated by the pliant media — claimed that the temples were destroyed by the rebels.

Amongst the many temples was the temple of Bashiqa, one of the holiest sites for the Yazidis, claimed the fundamentalists.

The truth is, there never existed a temple at Bashiqa according to scholars.

Some right-wing fundamentalists posing as archaeologists claimed to have found ample evidence of a temple underneath the mosque.

But, the scholars immediately concluded that it was fabricated. The rebels were incapable of such barbarities. If at all another religious structure stood at the site of the temple, it was a coincidence.

In a very incisive piece, eminent historian Pamela Thappar had asked, “How far back will you go this way?”

But, scholarship lost. Fascism won. The foundation stone for the temple was laid on 5 August 2035.

Today is the centenary of that tragic event — an event where Islam was humiliated by fascists around the world. To register protest against that black day, and to have a scholarly discussion about the ramifications of that tragic event, the History department at the Priyanka Gandhi University had organised a seminar series.

Scholars were to discuss the alarming trends of rising Yazidi majoritarianism and Islamophobia in the 22nd Century.

Alas, this optimistic story must end here. It is optimistic because it starts with Yazidis being able to go back.

They will probably never be able to. That is what makes 5 August, 2020 historic.

P.S. For the uninitiated, this piece is aimed at “historians” and their subversions, and not at Islam or Muslims. The write is fully aware that religious conflicts in the medieval times were often accompanied by violence from all sides.