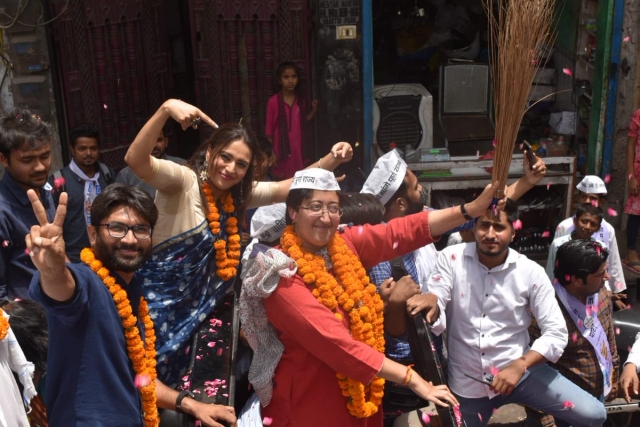 Trying to live up to the ‘New Left’ label given to it soon after birth, the party appears confused and clueless about its standing on different issues, including Shaheen Bagh.

Currently, AAP has only been able to define itself in opposition to Bharatiya Janata Party (BJP).

While BJP offers a clear-cut vision; Congress has its old guards and clientele networks; and regional parties have their voter base revolving around loyalty to a particular family/clan, AAP struggles to convey people what it is and why it’s different.

Born out of anti-corruption movement based in the urban middle class, many expected that AAP would be able to free the cities from the ‘tyranny of rural politics’.

The hope of alternative politics from AAP was grounded in its pragmatism.

It was this pragmatism, straightforwardness, simplicity and ‘doer’ appearance of Kejriwal, in short, his middle-classiyat, that gave a sense of representation and relief to the middle class, tired of outdated idealism of Leftist elites, their persistent moral shaming, and arrogant claim of being the voice of poor and marginalised.

This urban middle class was different from rural electorate and the urban upper class in two crucial ways- mobility and aspirations.

It was composed of people who weren’t poor anymore, yet had an experience, direct or indirect, of poverty. For example, the children of first generation urban parents who had extended families and ties in the rural area.

These children, now grown up, lead an urban lifestyle, got college education and good occupations, yet the experience and lessons of the poverty faced by the previous generations (and perhaps themselves in their childhood) aren’t lost to them, unlike the upper class.

Delhi’s middle class had experienced upward shift in status in the past and aspired for more in the future. Their experience was in contradiction to the Left’s one-dimensional and static narrative of poverty and marginalisation.

This constituency was electorally, economically and socially significant, yet couldn’t find its voice heard.

Kejriwal, an IIT Kharagpur graduate and a former bureaucrat, was himself an example of a person from the mobile, aspirational urban middle-class.

What this middle-class wanted was a politician minus the politics.

Kejriwal’s image suited this idea. He challenged the status-quoist elites, and wasn’t only well-educated, from an engineering background, but also an experienced government officer- a person trained in political neutrality with 'getting the job done’ attitude.

It was because of this perception that AAP could remarkably wrestle middle-class constituency from BJP in the last assembly elections in 2015.

Post success, however, Arvind Kejriwal was too reckless in adopting ideological dispositions. The charm of intellectual-tag is hard to resist, and AAP betrayed its original promise for the card of ideological superiority and virtue signalling from the Left.

The scent of AAP’s initial political gains attracted hidden mites who were forced by the Indian electorate to take refuge in the universities - their last bastion. Having not seen political success in a long time, they are now mooching off of the party, eating away its core.

Not only Kejriwal failed to realise that it was precisely these elites that he rose to power against, but also forgot to heed the long history of the Left parasite eating away social movements.

The lack of political judgement in the Indian Left has been reflecting in AAP’s demeanour since their marriage. Indian politics has little patience for partners like Swara Bhaskar and Prakash Raj whom AAP seated on its shoulders.

In an attempt to focus on BJP as enemy number one, genuine concerns of middle-class castigated as ‘BJP issues’ became untouchable for AAP, and the party tried to dispose off tough questions with moralising, empty responses (Sisodia asking to build a university at Ram Janmabhoomi instead of temple, dilly-dallying on culprits of 1984 anti-Sikh riots).

Instead of deflecting, if AAP had addressed these with honesty and realism, especially issues around Hinduphobia and similar grievances that find no takers from parties other than BJP, not only would it have lived up to its promise of an alternative to both BJP and Congress, but also maintained its ground.

Depending on deft handling, AAP could have very well become the new centre in the face of a declining Congress party and its increasingly discredited academic partners. The race was evident as at one point, Rahul Gandhi was reportedly actively copying Kejriwal.

There is nothing wrong in this, except that it is a strategy based on wrong assessment of the reality.

The rise of BJP is not premised on a rise in Hindu religiosity, or even Hindu nationalism! Research shows that a pan-Hindu unity, and rise of Hindu political being is behind BJP’s success.

Today’s Hindu might not be thrilled about the Congress or AAP misdiagnosing his rise as a political being as simply a rise in Hindu religiosity - and making gestures like temple-hopping to manipulate it.

Even if AAP goes on to win a respectable number of seats, the co-optation of the party by the Left and its bitter betrayal of the middle class will be remembered, as will be the broken hopes of alternative politics.

Before AAP heads to rebuild itself, which it should, it has to assess how a party that shunned political correctness and took a pragmatic approach towards a topic as sensitive as reservation (“reservation is not the solution”), went on to exhort Muslims to come to its rallies without skull-caps to fool Hindus and defeat BJP.