Thimmakka And Chikkanna: They Raised Trees To Fill A Personal Void 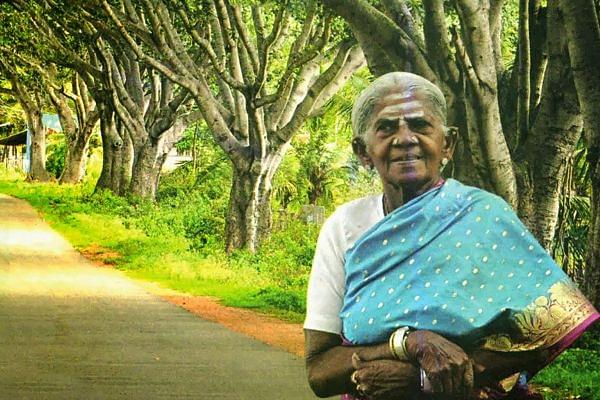 The status of 'good news' was so bad in 2001 that a tiny note on Thimmakka was all that appeared, as a snippet, in the innerpages of national press; that too because she had been given a national award. It took me 3 months to actually track down her address. Newspaper offices didn't know. They had moved on. A young journalist in Bangalore helped me with driving direction.

I drove down one morning and was alone in that tree-lined avenue. Wind rustled and birds were in song. Four years later I was to begin my pointReturn work.

Once I posted the detailed story, below, it drew wide attention. I was convinced of the value in reporting good work. The last line in the article provoked many to get into action. Many visited her. Fame and recognition followed. In this WikiPedia page, my story is the earliest listed reference. Do visit it to read all that followed the 2002 story. She made me famous and gNI gained many followers.

As I write Thimmakka lives on aged 105, inspiring many around the world
- dv 2017

The 300 Trees Of Thimmakka And Chikkanna

To be in Karnataka's countryside is to be among a gentle people in a cared for land. Unhurried gaits, unfailing courtesy and old world ways are the norm. But are you to be served with magic too? Yes, at least on a 4 kilometre road between Kudur and Hulikal.

Towering avenue trees flank this quiet road. There is a riot up there, of fearless birds drunk on juicy fruits — their screech is delightfully unbearable. The road is gummy with fallen figs. A cyclist pedals on under a shade that makes it nearly dark at noon. Off road, crisp leaves slosh about your calves even as a breeze is steadily blowing them off to nearby fields of rice, wherein to crumble and enrich. In just one stretch of a modern road, nature stages her perennial play, in which trees plug into the sun, drop their produce and the land absorbs the gift and feeds the people. Thimmakka is only now aware of the parts her ‘children’ are playing in it.

“Your children are who will remember you lived.” So goes an abiding myth. In India the hold of this myth is so strong that couples without children are seen to be accursed. A woman who cannot bear children is presumed to have no life. It is this myth that Thimmakka has mocked.

She was born in the town of Gubbi 75 years ago and as a very young girl, married off to Chikkanna of Hulikal village. They were landless labourers. As years rolled by, it became clear that the young couple were not destined for parenthood. To this lack was added Chikkanna's stammer: it earned him the nick-name, 'Bikkulu' Chikkanna. The life of landless labourers was hard enough; the other circumstances rendered them objects of derision.

Today, sitting in her clean little house, Thimmakka reminisces: "Our evenings were lonely. But he was a kindly man. There were pressures on him to seek another wife but he refused. He kept thinking of 'something to do' with our life."

One day, 45 years ago, Chikkanna and Thimmakka simply decided to plant trees. Nothing unusual about that, except unlike most of us who plant them in our gardens, this couple chose to line the dusty road between Hulikal and nearby Kudur with their trees. That is a 4-km stretch. "It was a dry, hot road. Our villagers had to go to Kudur frequently — and dreaded it. So we thought it would be nice if trees came up and shaded the way," she says.

They began, quietly; just the two of them. They selected the peepul (ficus religiosa) exclusively, and raised baby trees in a tiny nursery. And then off they went to plant them. (Incidentally, their foresight of planting them far apart across the road but close between in the rows is amazing; today you can lay a highway between the columns without having to cut a single tree!)

Chikkanna then built thorn guards around their little wards. The plants had to be watered every day till they established, then, every three days for a year and later every week until they were 10 years old. Every morning they would set out, Thimmakka with a pot on her head and another on a hip and Chikkanna's with a load of two pots hanging from the ends of a pole over his shoulder. They refilled the pots from wells and ponds along the way — in all about 40 to 50 pots a day.

Every year, they planted 15 to 20 new plants until finally they had covered the whole of the 4-km between Hulikal and Kudur. They were in love with their 'children'. Chikkanna quit working for a wage to keep a vigil on his young trees and to water them. He patrolled the stretch, shooed off cattle and watered the trees. Thimmakka worked for a wage to keep the pot boiling.

Thimmakka also recalls another facet of Chikkanna's life. It was usual in many villages to round up cattle straying on to agricultural properties and impound them in a pen. Owners eventually turned up, paid a fine and led their cattle off. Often, some cattle would be in the pound for a few days. Chikkanna always showed up at the pound to water and feed the cattle — a task the village often forgot.

Recognition began to come Thimmakka's way in 1995, a good five years after Chikkanna's death. First there was the National Citizen's Award in 1995 and then the Indira Priyadarshini Vrikshamitra Award for 1997. She sits alone in her little house with her memorabilia. Central on a dwarf wall in the house is a picture of Chikkanna. Other certificates hang too. But most fetchingly, a crayon sent by a school girl: in the drawing the girl is planting trees and labels herself Salumaradha Thimmakka or Thimmakka of the Avenue Trees.

Thus 45 years, spent in the life of two unknown Indians. Isn't it time we began to honour Indians who add lasting value to the land and inspire others to action? Shouldn't the avenue be named after Chikkanna and Thimmakka with a plaque telling the travellers of their story? Now, who amongst you is going to take the lead in getting this done?

This article first appeared in A Personal India and has been republished here with permission.