We Are Not Prisoners Of History: It Is We Who Create History! 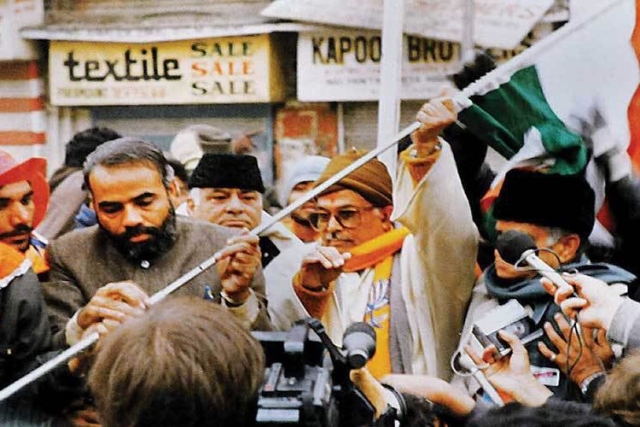 By now the suspense on developments in Kashmir are over and somehow all that was being speculated has come true. Earlier today, the Home Minister Amit Shah moved the resolution to abrogate Article 370 and proposed bifurcation of the state into two union territories.

This should not come as a surprise as the Bharatiya Janata Party (BJP) since the Jan Sangh days has been consistently advocating a removal of Article 370. The issue of full integration of Jammu and Kashmir with the Union of India has been a prominent feature in BJP’s manifesto.

Therefore, when we went to polls in 2019, we asked a mandate for our manifesto which included the issue of Article 370. The fact that we were blessed with 303 seats reflects the popular support towards this issue.

But, why is Article 370 so important for the BJP? The answer to this is in the history of the BJP and its deep ties with the cause of national integration. After Pakistan’s attack on Jammu and Kashmir and Hari Singh’s decision to sign the Instrument of Accession to India, the Indian Army retaliated and freed two thirds of the state from illegal occupation by Pakistan.

However, Nehru ordered a unilateral ceasefire before the army could regain control over the entire state.

Dr Shayama Prasad Mukherjee, who was a minister in the Nehru cabinet, resigned and started the Jan Sangh primarily as a reaction to this historic blunder combined with the silence of the Indian administration on the brutal repression of Hindus in Pakistan.

Therefore, the very birth of the Jan Sangh, which later became the BJP, was driven by the intention of creating a political party that wouldn’t compromise on national interest for petty political gains.

Eventually, when 500 princely states became a part of the Union of India, Nehru gave special status to the state of J&K under Article 370 of the Indian constitution. What it meant was that no Indian citizen could visit the state without a tourist permit (or a visa) and that it could have its own constitution, flag and even a prime minister.

This was unacceptable to Dr Mukherjee who, as a mark of his protest, decided to enter J&K without a permit. On 11 May 1953 he succeeded but was arrested at the Lakhanpur check post and he told a young Vajpayee to go tell the people of India that he had entered the state without a permit.

On 23 June 1953 Dr Mukherjee was pronounced dead in prison under suspicious conditions and this was the first sacrifice in independent India. This sacrifice paved the way for us to enter the state without any permission.

The evolving situation of Kashmir became such that due to special provisions, development of the state got stalled as people from outside the state could not buy property. This restricted investments, curtailed the scope of employment, growth and opportunities for generations.

The affluent people of Kashmir benefitted from the system as they were able to grab political power through rigged elections, and corruption became rampant across the state.

Consequently, fundamentalist tendencies amongst the youth became common due to lack of opportunities for education or jobs. During the late ‘80s and early ‘90s, it was a given that an Indian could not hoist our national flag in Srinagar’s Lal Chowk.

This was unacceptable to the BJP; so two leaders set out to do what was considered as impossible. One of these leaders was Dr Murli Manohar Joshi while the other was none other than our current Prime Minister, Narendra Modi. Their Ekta Yatra — from Kanyakumari to Lal Chowk — was successful as despite terrorists’ threat, on 26 January 1992, they managed to hoist the national flag at Lal Chowk.

These developments led to a unanimous resolution being passed by the Parliament on Kashmir in 1994, where it stated that entire Kashmir was a part of India and that Pakistan was an illegal occupant of some part of the state, which must be rightfully claimed.

Since then, during Atal Bihari Vajpayee’s tenure, there were many attempts to restore peace in the Valley as he believed that development was Kashmir’s solution. Despite his outreach in terms of more budgetary allocations, he lacked the mandate to find a political solution that looked at complete integration of Kashmir.

During the UPA government, Kashmir went back to the business-as-normal approach as political leaders in Delhi stopped trying to find a solution to the Kashmir issue.

Things changed when the Modi government came to the centre with a full majority. It looked like things could improve and the government gave a chance to find a political resolution post the Kashmir elections when Mufti and the BJP decided to form a government in a coalition.

But the BJP didn’t compromise on its commitment towards national integration and post the demise of Mufti, when Mehbooba started to engage with separatists the alliance was called off.

Since then, the state has been governed well and the Governor has been looking into the extent of corruption that the state had witnessed over generations of misrule by the two political families. There was a need to find a solution towards ending the chronic mis-governance in the state and towards ensuring its complete integration with the Union of India as envisaged by Dr Mukherjee, Dr Joshi and Atal ji.

The fact that a young Modi was an integral part of the Ekta Yatra also reinforces how important this issue is personally to the PM, who has mentioned Article 370 in several of his early speeches during the ‘90s.

The mandate of 303 combined with Amit Shah as the Home Minister was all that Modi needed to finally deliver on one of the hardest promises in the BJP manifesto. No matter how you look at it, a historical blunder has been corrected today while history has been made in the Parliament by the Modi government.

It would serve us well to always remember that we’re not slaves of history — it is we who create history, and therefore, we must expect more such historical blunders to be corrected in the next five years.