Why A Call For ‘Intifada’ At Jamia Millia Should Worry Us 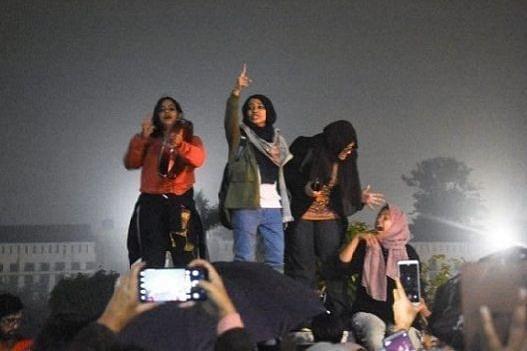 Yesterday (13 January), Jamia Millia Islamia heard slogans of “intifada inquilab” in the campus. Shouting slogans, which have Arabic origin, is nothing new for students at Jamia. Following these chants, it becomes necessary to know what the term means, and how it has a violent history in the Middle East including rebellion and civil war.

Etymology of the term is simple. Intifada is an Arabic term derived from nafada, which means to ‘shake off’ or ‘get rid of’. Be it Israel-Palestine conflict or unrest in Gulf, this word is used to describe them.

The wide scale use of this term first happened during Iraqi intifada of 1952. Iraq was a state ruled by King Faisal II. Around the same time, Iran had become a republic and nationalisation of the oil resources had started.

Iraqi communist parties and student organisations started strikes across the country demanding the overthrow of the king. They also called for nationalisation of resources. Protests turned violent and ended with the killing of the ruling family in 1958.

Palestinian uprising against the Israel government is also known as intifada which happened multiple times — from 1987 to 2015 — causing deaths of thousands. Intifadas happened during the Lebanese Civil War and Iran-Iraq War too. As usual, these resulted in the killing of many people.

Similar but small-scale intifadas happened in colonial Sahara and Bahrain. In Sahara, Spanish forces had colonised the territory and Zemla district had started intifada against the Spanish government which resulted in the killing of at least 10 civilians and injuring hundreds. This is widely known as Zemla intifada of 1970.

In Bahrain, this is known as March intifada, which was provoked by the Leftist parties to end the colonial presence of the British in March of 1965. Another intifada happened in Bahrain between 1994 and 1999 to bring democracy back to the country which was abolished by the monarch in 1975.

Tunisia, Yemen and Egypt also faced intifadas to change the system during 2011-13, resulting in the death of hundreds and injury to thousands.

Call for intifada should be a warning sign for us. The only intifada which was non-violent is Cedar Revolution of 2005. The history of intifadas is violent and bloody in the Middle East. They include civil war, killing of rulers, attacks on government-ruled institutions including police stations and hospitals, and overall disruption across the region.

Intifadas are not in line with Mahatma Gandhi’s method of satyagraha. They are completely different. Violence and civil war in a country is not an option in satyagraha but it is a part of intifadas.

One point to be noted is intifada happens to replace existing system with another. In Tunisia, it resulted in the democratisation of the country. In Egypt, it resulted in bringing to power Islamist and radical organisation Muslim Brotherhood.

Another point is we have seen vandalism to public properties and threats to democratically-elected prime minister during the anti-Citizenship Amendment Act protests.

Posters like “samvidhaan badal sakta hai, shariya nahi” also appear regularly in the protests. We have seen sloganeering like Khilafat 2.0 during the protests. How can we forget chantings like In kaafiro se azaadi? and Jinnah wali Azaadi etc?

Do these intifada supporters want to change the system of governance in India or overthrow the Constitution? Do they want unrest in the country and want to kill the democratically-elected leaders? History of calls for intifada is horrific and has often resulted in civil wars. These questions must be asked.