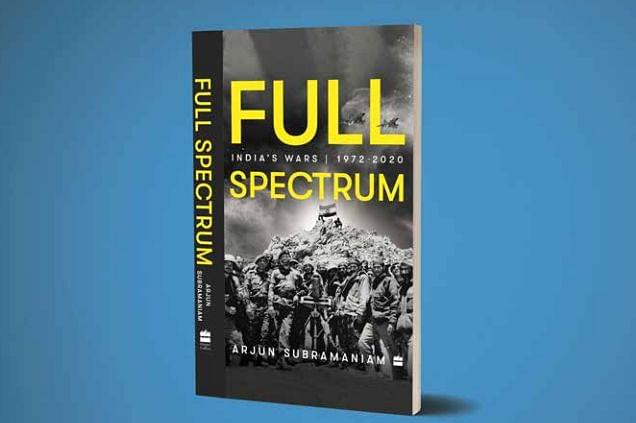 Full spectrum is a reservoir of analyses, narratives and warrior reflections from the post-1972 conflict landscape involving the Indian Armed Forces as they upheld national interests in the face of varied contingencies. Written with professional insight, the book brings out the historical connect, doctrinal interface, planning and execution of each of these operations.

The most significant part of this professionally authentic narration is the factually correct and dispassionate analysis of matters military as they unfolded in South Asia and impacted the Indian strategic turf.

Having served in some capacity or the other in most of these military engagements that the author writes about, it has been a nostalgic journey for me to revisit the operational nuances and their professional perspectives from the tactical to the strategic levels.

The story begins in the early 1970s and rapidly moves past all the major operations involving India’s armed forces – Operation Meghdoot (Siachen), Operation Blue Star (storming of the Golden Temple in Amritsar), Operation Pawan (intervention in Sri Lanka), Operation Falcon (the Sumdorong Chu faceoff with China), Operation Cactus (foiling the coup in Maldives), and Operation Vijay (Kargil). Running alongside in the narrative are the insurgencies in the Northeast and the ongoing proxy war in Jammu and Kashmir.

The author has dovetailed the recorded military history with a personal recall of the events by accomplished commanders who have orchestrated and fought in these campaigns, adding an authenticity to the narrative.

Interestingly, the book also dwells into a few operations that were planned but not executed, a unique aspect that is rarely found in conventional military history literature.

Another distinct feature of the book is the detailed joint perspective offered by the author. His commentaries on the lesser known participation of air power as an instrument of strategic import and its decisive impact on joint operations are revealing.

How air power was woven into unplanned operational contingencies in less-than-war situations and how leadership and frontline pilots coped with several high-risk situations make for an interesting read. The author deftly introduces the human element of military aviation when writing about the air operations conducted in the Northeast, Siachen, Sri Lanka, Maldives, Kargil and Jammu and Kashmir theatres.

Similarly, the author has tracked the build-up of naval power over the last few decades and how it has facilitated the projection of national power beyond Indian shores and facilitated the extension of influence in its areas of concern.

The employment of the Indian Navy in support of operations in Sri Lanka and Maldives has been covered well, besides its coercive employment during the Kargil conflict with the potential of strategic dislocation of the enemy, should a wider conflict have erupted.

The book is an appropriate reference point for concepts and applications of air as well naval power in conventional as well as low-intensity conflicts in a grey zone, insurgency environment.

It is laid out in 19 chapters spanning not more than 15 to 20 pages each, making it reader-friendly and catering to short reading spans. Each of the chapters is exclusive in its content and is generally dedicated to operations in a largely chronological sequence, thereby making it possible to read the book in parts at the convenience of the reader.

The chapter on ‘Chameleon wars’ provides a backdrop to the concept and design of contemporary warfare and its hybrid variants as they have emerged in Indian context.

‘India’s Military Renaissance’ goes on to discuss the revolution in military affairs (RMA) in terms of acquisition of weaponry, systems and structures, building up technology-driven combat edge and development of tactics at the executive end. These two chapters are necessary for readers who are new to military parlance to grasp the doctrinal aspects behind the military engagements that follow in the subsequent chapters.

The ‘Naga Rebellion’ is an account of the oldest insurgency and its trail of violence that has afflicted large parts of north-eastern India. The complicity of China in supporting the Naga cause, alongside the lack of seriousness by New Delhi to grasp the several opportunities to resolve the issue have been highlighted.

The role of the IAF in breaking the cordon of security forces has been highlighted to bring home the utility of air power even in internal security contingencies. Subsequently, how the emerging synergy between the military and political dispensations has made it possible to draw the rebels into joining the mainstream is well worth a read.

‘Operation Blue Star’ is discussed as a case study of the systematic subversion of society and its inimical impact on national security. The author has brought out as to how political neglect and manipulation gave space to external forces to intrude and encourage a separatist narrative. The military response to the situation is the mainstay of this chapter with a critical analysis of the entire episode which could have been handled better.

The chapters on Siachen offer a deep insight into one of the most strategically significant operations ever launched to correct cartographic ambiguity. The daredevil feat of the pioneers in establishing footholds on the frozen heights in super high altitude has been described with nail-biting details. The herculean tasks to capture tactically important features, most of them located above 20,000 ft altitude, highlight the unparalleled grit and determination of the Indian troops.

Reading about maintaining combat effectiveness of the troops in the face of hostile enemy action and inclement weather offers the lay reader an idea of the environmental difficulties in super-high altitude battlefields. The role of the flyboys of IAF and Army Aviation, conducting sorties and operating beyond the call of duty, gives credence to the phrase, ‘those magnificent men in their flying machines.’

The China factor with its periodic coercive forays across the LAC/McMahon line is the main theme of the chapter titled ‘Standing up to the Dragon’. The setback to China during 1967 Nathu La skirmish followed by the Sumdorong Chu episode of June 1986 has been discussed in the backdrop of Indian resolve to resist Chinese moves after the disastrous defeat in 1962.

The doctrinal shift by India as it initiated a forward posture as part of Operation Falcon has been discussed in detail through the lens of a principal commander on the ground. The role of air power in sustaining the troops in remote regions has been included as a prompt for military planners to recognise the potential of the air force in such joint operations.

The peace keeping mission in Sri Lanka and intervention in Maldives are interesting reads of Indian forays in out-of-area contingencies. It was the first time that India chose to showcase its military capabilities of power projection beyond its territorial boundaries. It served to signal India’s stature as a regional power and its political will to assert dominance, if the situation so warranted.

The narrative includes the politico-economic denial by the Sinhala majority in Sri Lanka, leading to the rise of minority Tamil nationalism, which later manifested into a hard-core insurgency of intransigent strains.

The author has covered the Indian political compulsions and a hurried launch of military operations in Sri Lanka in the first part of this section of the book. He has subsequently concentrated on the military campaign in detail.

It is interesting to read the dispassionate and candid analysis of this mission which saw ‘peace keeping converting to peace enforcement’ at a short notice.

Similarly, the intervention in Maldives has been discussed, further reinforcing the efficacy of the armed forces even when they have been pushed into an operation with almost no prior notice.

The Kargil conflict of 1999 is a landmark military triumph of Indian armed forces in the face of overwhelming odds. This has been discussed in the backdrop of likely Pakistani objectives of, and strategies for, undermining India’s territorial sovereignty.

The delayed Indian response to the territorial intrusion in the absence of intelligence and the inadequacy of forces to push back the well-entrenched regulars has been covered in a candid manner. The subsequent Indian offensive, raw courage of the young officers and men and innovative employment of air power occupies the main part of the narration.

This is followed by the lessons learnt and a commentary on force restructuring to neutralise the emerging collusive threats from India’s hostile neighbours.

The genesis of Pakistan-sponsored insurgency and terrorism in Jammu and Kashmir and the consequent disturbed public order due to subverted politico-religious narratives is covered through narratives from practitioners who have spent a lifetime in the state. The Indian response with its initial graduated cautiousness giving way to the employment of the security forces in strength to deal with the deteriorating situation has been analysed from a socio-political and military perspectives.

The anti-India narrative of Pakistan and its manifestations in frequent violations of ceasefire on the line of control and acts of terrorism provide an insight into challenges in J&K.

India’s participation in several UN missions has been touched upon in fair detail to highlight its role in contributing towards international peace. Several major military deployments, short of war, namely Exercise Brass tacks, Operation Trident and Operation Parakram have been covered based on open source information and recollections from practitioners. These were all part of coercive military posturing to attempt to force Pakistan to mend its ways and stop subverting Indian democracy.

The political shift from a dissuasive strategy to a punitive one, as reflected in the surgical strike by the Indian Army in 2016 and in the Balakot air strike in 2019 by the IAF, has also been adequately covered .

The book stands out on three counts from other Indian military history narratives.

First, it is a ringside view of a professional in uniform who has been a witness to decision-making and execution; a privilege not available to academic historians who depend on secondary sources.

Secondly, it is focused on tri-service perspectives unlike the primacy of an army discourse in most available books.

Thirdly, the candidly critical analysis of each of the operations has high doctrinal and structural content, which can only be given by an insider providing inputs for future planners.

Overall, it is a one-stop read for those seeking a professional perspective on contemporary Indian military history sans the usual verbosity and non-essential peripheral details. It is a compendium of military campaigns and engagements arranged in an abridged format for easy reading.

It is a must-read for all officers of the armed forces, for citizens who aspire to know more about India’s armed forces, and the strategic community of policy-makers in the realm of national security.

There are also significant takeaways as prompts for the industries connected with defence production too. This book deserves to be subscribed by libraries across the country and abroad as a reference book on Indian military history in modern times.