Book Excerpt: What Happened In The Streets And At Homes When Ramanand Sagar’s Ramayan Was Telecast First 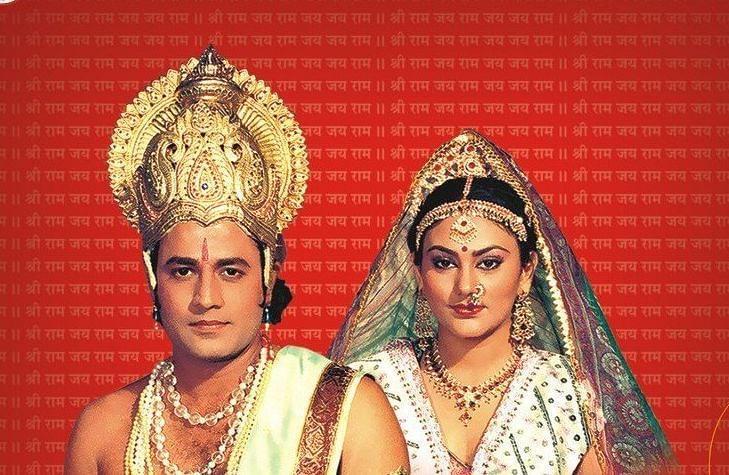 Arun Govil as Ram and Deepika Chikhalia as Sita

Ramayan and its re-telecast has taken the world of television viewing by storm.

But this is just a mild reflection of the way in which it affected people’s lives back then when it was originally telecast.

A chapter in ‘An Epic Life: Ramanand Sagar: From Barsaat to Ramayan’ on the making of the Ramayan describes its entire journey from its conception, and hurdles to its success.

Having braved many a impediment, when the serial got on air, for the first time televising what people had conceptualised in their minds for centuries, it simply won the nation over.

The show was shot non-stop for 78 weeks with 24 hour schedules. But the reaction it got too was of the same scale.

From tribal women placing their babies at the feet of the character playing Lord Ram to people travelling by buses for thousands of kilometres to have a ‘darshan’ of Ram, this serial personified the deities and deified the characters who portrayed them.

There were many interesting incidents during the telecast of Ramayan. Apart from powerhouses being set on fire by frenzied mobs if there was a power cut during the telecast, brides were said to have run away from the marriage mandaps, to not miss watching Ramayan, before completing the nuptials.

Streets in Karachi (Pakistan) were said to have worn a deserted look on Sunday mornings during the telecast. Even funeral processions were said to have been halted, with the corpse made to sit on a chair with open eyes to watch Ramayan for one last time!

In Delhi, ministerial swearing-in ceremonies had to be delayed for lack of attendance, political rallies had to be postponed and the Hindu-Muslim rioters in Muzaffarnagar were said to have found deserted streets.

Such was the impact of Ramayan! As one newspaper put it, ‘It was a revolution in those times.’

Every Sunday, the train from Patna to Delhi would be delayed by one hour. The railway inspectors who were sent to find out the mystery behind this phenomenon discovered that only on Sundays the long-distance train reached a station called Rampur at 9 a.m.

All the passengers, guards and even the driver would get off the train and go straight to the waiting room. They would sit in front of a TV set, garland it, break a coconut, light incense sticks and shout ‘Jai Shri Ram’.

For forty-five minutes, no one would move, and there would be pin-drop silence. Thereafter, the train would leave, an hour late. It was revealed that all the regular passengers had pooled in money and bought a black-and-white TV set, only to watch Ramayan every Sunday morning.

Another incident was about journalist Ali Peter John (who worked for Screen then), who was recouping at the Holy Spirit Hospital in Marol, Bombay.

Next to his bed in the common ward was a fifteen-year-old who had lost his memory. His mother and sister would visit him regularly and try to jog his memory, but in vain.

One Sunday morning, someone brought a TV set and put it in the common ward for everyone to watch Ramayan.

Ali noticed a change in the boy’s expression. After the episode ended, to the utter surprise of everyone, the boy asked everyone if Lakshman was alive after Indrajeet’s arrow knocked him unconscious.

The doctors rushed to the patient and the mother and sister hugged him, tears rolling down their cheeks. The entire ward was stunned at this miracle.

One day Papaji received a frantic call from a very prominent doctor from Madras. One of his senior citizen patients had gone into a deep coma, since he was unable to bear his icons Ram and Lakshman waiting for their deaths, caught in a ‘Naagpash’ (snake trap).

The doctor fervently requested if someone could be flown to Madras by the next flight with the next week’s episode where Ram and the ‘Sheshnag’ avatar of Lakshman came alive.

This was considered to be the only last hope medically. Papaji roughly edited the rushes and dispatched the next week’s episode, showing Ram and Lakshman alive, saved by Garuda, the enemy of snakes.

The Ram devotee bounced back to life, weeping profusely and paying obeisance with folded hands. Such was the impact of the serial … nothing short of divine.

After the Sunday telecast of the Naagpash episode, another shock awaited Papaji.

On the following day, a leading newspaper carried headlines about a nationwide revolt by pundits, Ram Katha Vachaks (narrators of the story of Lord Ram), die-hard Hindus and scholars, that Ramanand Sagar did not know the Ramayana and that he had fictionalised the sequence of Naagpash since there was no mention of it in the classic tale.

Immediately, Papaji shot off a press release giving the page number and the verse number detailing the deadly sequence and specifically mentioned the Sankat Mochan Hanuman Masthak, which spoke about the Naagpash sequence.

This clarification cleared the air and the whole nation rested easy. From there on, viewers had unwavering faith in the serial and its makers.

In another interesting incident, in Patna, there was an asylum with a central courtyard surrounded by cells secured with iron bars on all four sides. Several monkeys inhabited the surrounding trees. There was a continuous tussle between the inmates of the asylum and the monkeys over the food served to them.

A psychiatrist suggested that if the inmates were shown the serial Ramayan, seeing the character of Hanuman on the screen, they might become more friendly towards the monkeys.

The authorities placed a TV set in the middle of the open courtyard surrounded by the prison cells.

Every Sunday, the inmates were let out and made to sit in front of the TV. Soon enough, Hanumanji, with his devotion and spiritual charm, had won over these inmates who then became friendly with the monkeys and even started sharing their food with them.

Every Sunday morning, the monkeys would join the inmates in watching Ramayan.

Excerpted with permission from ‘An Epic life: Ramanand Sagar’ by Prem Sagar, Published by Westland.