Why A Leopard Cannot Change Its (Living) Spots 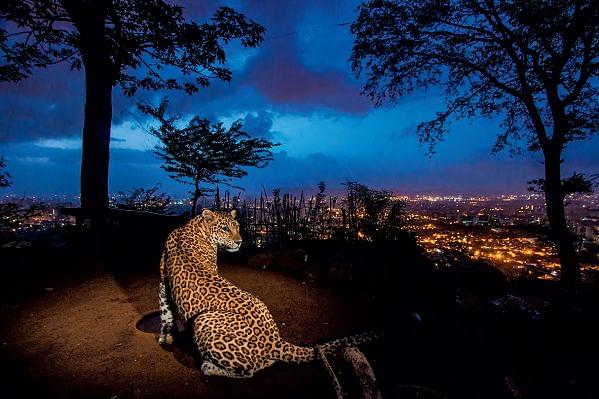 Leopards are found even on the outskirts of large cities like Mumbai, Bengaluru and other metros.

In India, after the enactment of the Wildlife Protection Act in 1972, wildlife numbers started to bounce back due to the protection offered against poaching and habitat loss.

Poisoning and hunting for sport or for eradication purposes — when leopards, tigers and dholes were seen as lantana-equivalent pests — were legally outlawed.

Due to the enforcement of laws, species like the one-horned rhinoceros or the Asiatic lion were almost brought back from the brink of extinction. Species that were not threatened with extinction, like the leopard, also largely benefited due to the legal support, and leopard numbers in India have increased.

Unfortunately, leopards have perhaps become victims of their own success— the people who live along with them, have started to hate them.

An axe is constantly suspended over the leopard’s head, awaiting an uprising among people against the species.

Why does this conflict happen? We don’t have too many answers, and science has not truly given any solution to this increased conflict with people.

Scientists, largely based out of urban areas, merely argue that people have to ‘live’ with leopards. With no leopard troubles of their own, it’s easy for them to preach.

Conflict occurs far from where these researchers live and write about these issues. Unfortunately, livestock grazers and the communities living in such areas do not enjoy such distance between themselves and the leopards.

Writing in English, these armchair activists are also largely not read by those who bear the cost of conflict.

India has nearly 500 million livestock, almost half of its human population. With agricultural incomes becoming less profitable and more unstable by the day, especially for small and marginal farmers, animal husbandry has become an important source of supplementary income.

Livestock farming is the backbone of the livelihood of 72 per cent of India’s rural population, and 57 per cent of these households across the country, involving well over 100 million people, have livestock as their only important source of livelihood.

If a farmer whose livelihood is dependent on farm animals loses half or all his livestock in one night, does he have the ability to make a comeback?

Would he come with an olive branch to save wildlife? Would he be tolerant of wild animals, especially leopards? On the other side of the story is the burgeoning human population of the country, which demands more and more land for livestock grazing.

Today, in most leopard habitats, livestock compete with wild ungulates for forage. They are also the food base in many areas that are devoid of leopards’ natural prey.

I have a small theory. My theory — really a notion — based on an understanding of leopard population is that we have an inordinate abundance of leopards in some areas due to the presence of excessive livestock.

I feel that some of the areas we worked in, like Bhadravathi and Devarayanadurga, had this problem of ‘excess’ leopards that fed on livestock.

The socio-political economy of pastoralists has also changed in recent times. With the cost of meat going up, the pattern of pastoralism has changed drastically.

Entrepreneurs with rural backgrounds who have shifted their base to cities in recent times now see goats as a good investment. They invest in large herds and give the grazing work on contract to poor herders living on the rural side.

These entrepreneurs are also the ones who bag government contracts to construct roads, build drains, de-silt tanks and do other similar government-funded work in the rural areas.

This provides them with both the financial and political clout to gain power in rural areas in various ways. They also obtain influence by supporting political leaders, who bank on these entrepreneurs for gaining access to vote banks in the rural areas.

So, if there is loss of livestock due to large predators, the city-based owners create a ruckus with their newly acquired political influence.

Often, they support illegal activities like poaching and forestland grabbing. This sets them up against the forest department. Persistent livestock attacks or one serious injury or human death turns public sympathy against leopards.

For the local politicians, leopard attacks are an opportunity to express their dissatisfaction against the forest department.

This becomes a vicious cycle of conflict-driven and politically motivated attacks on leopards.

Animals attack when they feel threatened or cornered. During my days in Tumkur, where I spent most of my life, I learned a lot about wildlife conservation. I focussed not only on natural history but also on the fears and concerns of people who shared their space with wildlife like leopards.

I was witness to several instances of leopards entering human habitations and the response of people in such situations. No amount of schooling in wildlife biology could have taught me this field experience.

In June 1998, one incident that occurred at the edge of Tumkur, then a small town with a population about 100,000 people, gave me my first understanding of how injuries happen to people due to no fault of leopards.

It also gave me my first taste of how curiosity can kill the cat.

One early morning, I heard that a leopard had been seen inside a house on Garden Road. The location was merely five minutes from my home. Situated on the edge of the town, Garden Road mostly led to coconut farms, rice fields and graveyards.

By the time I arrived there, the leopard had come out of the house and fallen into a dry well in an adjoining coconut farm. A big crowd had already gathered at the edge of the farm. The forest department had managed to keep the 500-odd crowd away from the animal.

They all patiently waited at the edge of the farm as though a big movie star would soon arrive. Very thoughtfully, the forest department had summoned an ambulance in case of an emergency.

A small number of people had gathered around the well in which the leopard had fallen. The well seemed to be around 25 feet deep, and was lined with granite stone blocks.

It was clean, with none of the vegetation growth that is otherwise very normal in open wells. The leopard lay on its dry floor. The monsoon had already set in, so the day was cloudy, protecting the leopard from the harsh sunlight that would have otherwise stressed out the animal a lot more.

About seven–eight of us stood around the well to keep an eye on the animal. We took turns to peer inside at the leopard as we waited for nets to be brought to capture it.

A man in shorts and a white vest stood to my right with dry coconut fronds in his hand, fire lit to the ends. Cornered inside the dry well, the animal snarled at anyone with whom it made eye contact.

For over an hour, the forest department planned ways to get the animal out; no one knew how to handle this situation. It was, perhaps, the first such incident in the town.

I thought the animal was tired from all the stress it was under. But I was wrong. Suddenly, the leopard tried jumping the vertical well. ‘It will never make it,’ I told a forest guard who was standing on the other side of the well.

But to our astonishment, after a couple of failed attempts, the leopard made it out. As I watched, the animal jumped vertically about 10 feet, held on to the stone-lined wall with its claws, and made another jump.

Before anyone could react, it was out of the confines of the well. It lunged at the man with the coconut fronds standing right next to me, and clawed him on his belly. I ducked and missed being injured by a couple of feet. I could clearly see three gashes on the left side of his stomach. He was immediately whisked away in the ambulance.

This was my first close encounter of a leopard injuring a person.

(Excerpted with permission of the author)