Kazuo Ishiguro, Exile, And The Enigma Of Return 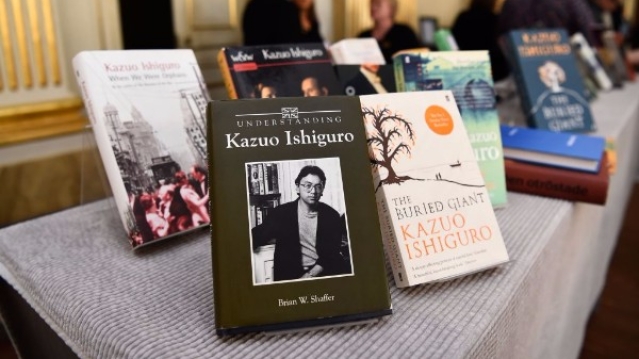 Books of British writer Kazuo Ishiguro on display at the Swedish Academy in Stockholm. (JONATHAN NACKSTRAND/AFP/GettyImages)

I expect to be disappointed when the Nobel winner in Literature is announced; perhaps the last winner I liked was Gunter Grass. I found last year’s award to Bob Dylan rather odd, for example: a balladeer is not exactly a litterateur, and I had expected that, finally, it would be Haruki Murakami’s turn. So it was a pleasant surprise that Kazuo Ishiguro won this year, for he is a modern master. (But I hope he’s not considered Japanese, and he isn’t: he quite possibly is the most English of writers these days).

I read his The Remains of the Day around 1990, if I remember right, on a vacation to the big island of Hawaii. I followed it up with Amitav Ghosh’s Shadow Lines. I was mesmerised by both books, and found them unputdownable. And years later, I still cherish as masterpieces, about the strange and wonderful issue of memory and the futility of regret, and with memorable but self-effacing narrators; in the case of Shadow Lines, he remains un-named.

Stories about our imperfect memories are appealing, partly because they often reveal more about the narrator than about the events narrated. For instance, in the classic Blade Runner (the original), the replicant Roy Batty has his famous “tears in rain monologue”, where he ennobles himself by speaking of his memories. He goes from being a crazed killer to a flawed hero in just a couple of minutes. Blade Runner is mostly about memories: are they real, or are they implanted? How can you tell? How can you ever tell?

The Remains of the Day is one of those wonderful books that can be read at several levels. As a pure narrative, it is about the self-delusion of the butler-narrator, and the poignancy of his realisation rather late in the day about how he has, in effect, wasted his life; and it is too late to do anything about it. This is something that all of us wonder about: what might have been, “if only”, supposedly the saddest two words in the English language. What about the paths not taken?

But at the next level, it is a commentary on the fact that memories are fluid. As in Rashomon, or in the superb Malayalam film Anantharam (monologue), we realise that the narrator cannot be fully trusted, for his story is altered in ways that make him look better. Sometimes the story is not as it was, but as he would have liked it to have been; and he may honestly not know the difference. In Anantharam that is exactly the device used: events as narrated by the narrator, and then as narrated by a neutral observer. This reminds you of William Faulkner’s The Sound and the Fury, where the same events are seen successively from different points of view.

At another level, Remains is a commentary on the politics of Britain during the Second World War, and while this is not so much my concern as an Indian, I imagine it exercises a lot of British people who wish to rationalise post-facto whatever they, or their ancestors, did (or didn’t do) in those days.

Many years ago, I had the privilege of speaking several times with Raja Rao, who was then living in Austin, Texas, where he eventually died. He liked to talk about Trivandrum, my home, where he said he had tried to settle down three times because his guru was there, but each time, his health failed him and he had to leave (he did locate The Cat and Shakespeare there). He told me that his masterpiece The Serpent and the Rope could be read on at least five different levels; I confess that I was able to discover only one or two of them.

Similarly, there was Kenneth Grahame, famous for The Wind in the Willows, but I liked his other work, The Golden Age, which could also be read at two levels, one as a child and the other as an adult, and it is entirely internally consistent in both readings, but they show vastly different views of the same world.

One of the most interesting things about Kazuo Ishiguro’s work is its understatement. We are now used to – and I personally prefer – the vivid, lush prose of the likes of Gabriel Garcia Marquez, or William Faulkner, or even the laconic violence of Ernest Hemingway. But Ishiguro is the very picture of understatement, what was once considered the very essence of British writing, stiff upper lip and all that, and perhaps that makes him the most “English” of writers today.

There are others with a claim to that of course, V S Naipaul, for instance. There was Graham Greene with his morally ambivalent heroes. And even John Le Carre and his alter-ego, George Smiley. And perhaps the non-fiction writers Theodore Dalrymple (not to be confused with court historian William Dalrymple) or even the late Christopher Hitchens (though Hitch was not averse to the occasional bout of rhetorical flourish).

It is Naipaul, though, that I am reminded of when thinking about Ishiguro. Because the two of them share that quality of being displaced persons, one Japanese-born, and the other Trinidad-born, but both of whom have made Britain their home. Naipaul also talks about this issue in his luminous The Enigma of Arrival, about the joys and tribulations of being neither here nor there. It is an awkward place to be, at the junction of two cultures.

Exile And The Enigma Of Return

In my own small way, I experienced this dichotomy: I once wrote a column about the existential pleasures of being an expatriate. Living in California, to outward appearances, I had a fine life. But inside I was torn, under two flags. The longer I lived in America, the more I felt an alien, an unwilling expatriate. I just didn’t belong.

This element of alien-ness illuminates Ishiguro’s perceptions and his writing. I noticed, for example, that the newspaper reports took care to mention that the Nobel had been won by the “British author” Ishiguro. Of course, because he doesn’t look “British”, which basically means white, for all practical purposes. Non-whites in ‘white’ countries face this problem of being ‘invisible’, in a way, as in the book Invisible Man by Ralph Ellison, a black American.

I thought of myself as being in voluntary exile, sort of as a willingly displaced person. I had Indian friends who assimilated well into America. A close friend joked, not entirely untruthfully, that she had been born in the wrong country purely by chance. That was her choice, and an entirely legitimate one at that. But to me that wasn’t enough. Like Ishiguro’s characters, I was slightly eccentric; not so far as to not be able to pretend, but not quite right.

And I used to listen to the migrating Canada geese, on their long flights to and from Mexico. Their heartbreakingly mournful cries spoke to me, and they said, “Exile! Exile!”. I could no longer live in California. I tried for a long time, and finally got a good opportunity to return, and to live in Bengaluru.

I have been back in India ever since. Friends told me of the shock of re-entry, and how the hump was two years: if you could make it to that long, then you could re-adjust. My cousin from California, who moved back just before me, didn’t manage to do that. He put his house on the market, sold his car, and shipped his household belongings. His teenage son was apprehensive about Indian schools. But before the container reached India, my cousin had decided that he had been sold a bill of goods by the company that hired him; and that he couldn’t quite cut it here anymore. He turned the container around, took his house off the market, and moved right back in, with very well-travelled furniture. He just had to buy a new car.

For, “the past is a different country; they do things differently there”. The India we had left was quite different from the India we returned to, although in our memories it had not changed. The “imaginary homeland” that India was in our minds in fact no longer existed. It is true that we also look back with rose-coloured glasses, and had forgotten the many inconveniences.

Sometimes I wonder idly – and I did so seriously under Congress rule – whether I should return to California. But then, America is not a “country for men of a certain age”, and I am not sure that I can deal once more with the enigma of arrival in a polarising, declining country. It’s much harder to adjust once you get older, which may be one reason Ishiguro and Naipaul have both decided to make Britain their homes, even though it too is a polarising, declining country.