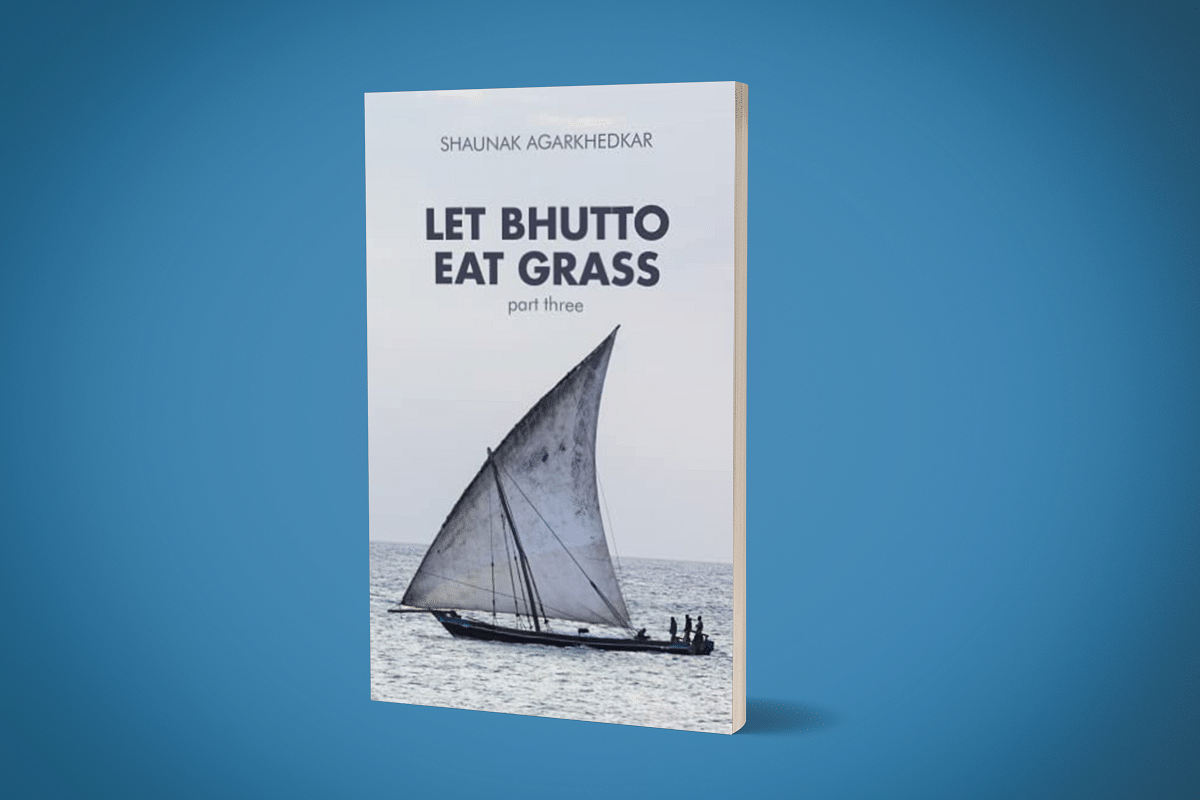 That it took as long as four decades after the explosion at Pokhran to fictionally sift through India's nuclear history is telling of the simpler issues such genre fiction usually addresses: the ambivalence around a nuclear warhead is such that it doesn't strike one as being a subject urgent enough to be addressed in a thriller – the stakes are not immediately tangible; quite the opposite, actually – the consequences are long-drawn, their impact too distant in time to be considered fodder for fiction.

Simpler, more black-and-white matters such as terrorism are easier to construct fictional facades around. Weapons of mass destruction – every sovereign nation's right, one could argue – leave too much room for argument.

Shaunak Agarkhedkar's Let Bhutto Eat Grass series deserves to be read as a fictional account of how a country chooses to enact its foreign and defence policies vis-à-vis a historically hostile neighbour. Insofar, these nations are not blind to the damage a nuclear warhead can render, but their purpose is to explore the more pragmatic side of the argument – to stop, by means covert, another nation from building a bomb.

In 1974, in the Thar Desert, Buddha Smiled as India became a nuclear power. Five years later, a man is intercepted in the same desert, having just about made it out alive from the fallout of an Indian excursion to Kahuta.

An "int" – different government has led to budget cuts for the Research and Analysis Wing in the third instalment of the Let Bhutto Eat Grass series, and the Mandarins inside – war-wounded youngster Sablok, ageing veteran Arora, and Section Chief Mishra – must make do with whatever scraps they can get their hands on.

One among these scraps comes from the land of India's colonisers, where the memoirs of Zulfi Bhutto – he of the title, written before his execution at the hands of Gen. Zia-ul-Haq – land in the lap of an operative of the Wing, who immediately communicates it to her superiors sweating it out in Delhi.

The first inkling that Part III might be different from its predecessors is when, soon after, it inserts the reader into London, Dharmendra and Amitabh Bachchan finds mention. It's the most noticeable cultural nod in a series curiously bereft of those, focused as they are on the politicking of the time. This book is sprinkled with them, almost as if Agarkhedkar were making up for lost opportunities.

It's an improvement upon Part II, which, while compelling enough, was bogged down by Sablok's Trombay trips and the masses of technical know-how/what. Agarkhedkar doesn't as much venture close to the bomb this time – the focus is now on the facility which could produce one, and just how far the Pakistanis have gotten in building one.

History buffs will be directed to the tests in Balochistan in '98 as being evidence of Pakistan's nuclear capability, and it is to Agarkhedkar's credit that he conceives a story wherein the development of such technology is probable two decades earlier.

What truly gives the book legs is that which made its predecessors such unusual specimens in the world of Indian espionage fiction – Sablok is not the hero. Nor is Arora. Nor Mishra. Yeshwant Mhatre is an operative, but not the operative, and James Bond, he is light years away from being. And Nissa, the London-based operative, is as much a femme fatale as GoldenEye's Xenia Onatopp is an analyst.

As if Pakistan's determination to eat grass weren't enough, the Wing's own government is a pain in the ass, burrowing its face into its personnel files and making mountains of molehills it finds interesting enough. One can't help but link it to the events of the neighbouring nation, where a legally-elected Prime Minister has not only been deposed but also been literally done away with, and wonder whether that is what Raisina Hill fears over and above all else.

Agarkhedkar keeps it strictly professional – something which wasn't as irksome in the earlier two books, which were a fair bit shorter than Part III. Here, the lack of personal lives the characters have is noticeable, and though Nissa has a drinking session with her neighbours early on, there is little else outside of work depicted.

In some ways, it is admirable (how many real espionage novels explore the personal side of the personnel?), but when you've spent as much time with the characters as Part III makes you, it gets a little monotonous to remain huddled inside workspaces.

That his use of language retains its proven traits does Agarkhedkar tremendous credit. It's a terrific exercise in the art of restraint: the functionality of language is paramount, and its deployment is in keeping with a spartan space Agarkhedkar has made his own. It doesn't feel underwritten. There's an ebb and flow. There's the kind of humour you'll only get out of government servants – kooky, often morbid, but economical.