On The Trail Of The Idol Thief: A True Story 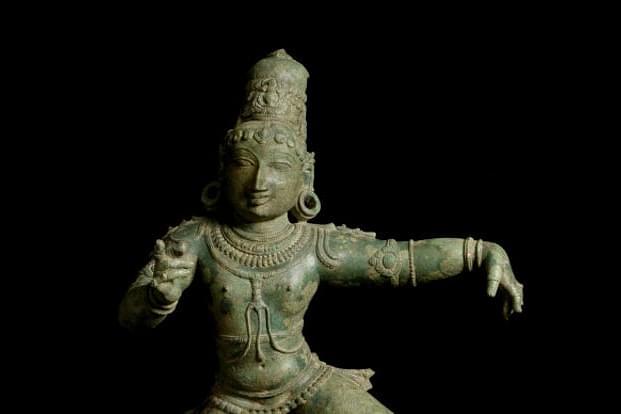 When you are at a 1,000-year-old temple in Tamil Nadu built by the Cholas, experiencing the cultural ethos and spiritual ambience is inescapable. As you circumambulate a temple, you marvel at the sculptures, for instance the Ardhanareeswara (androgynous form of Shiva) of the Kosta sculpture variety, and reverentially worship it, before moving on. However, after a few decades, you come to know that the idol you saw, admired and worshipped was not the original one, just a mediocre duplicate made locally. The original one is at an Australian museum.

But this is the true story of Vriddhachalam Arthanareeswara of Tamil Nadu’s Cuddalore district. It is not only the story of one sculpture. It is the story of Ganehsa, Nataraja and Uma from Sripuranthan and Sivakami of Suthamalli.

Be ready to get more shocked.

However, the feelings of shock, pain, agony and frustration will, thankfully, be alleviated by a deep sense of gratitude and admiration for a handful of men fighting against all odds to stop a blatant crime. One such volunteer is S Vijay Kumar, who is by day a finance and shipping company executive and by night a super hero.

Through the internet, he and his band of volunteers, a loosely knit group called 'India Pride Project', track the stolen treasures of India now housed in prestigious museums, in the lobbies of five-star hotels and in the living rooms of ancient art treasures collectors.

Setting the record straight, Vijay Kumar lucidly recounts the story of Ardhanareeswara in his book, The Idol Thief: The True Story of the Looting of India's Temples. The ‘non-fiction thriller’ starts off with a gripping narrative of how our ancestors hid the sacred idols during times of invasions, and how they withstood tortures when asked to reveal the whereabouts of the deities. As they lowered the deities into carefully dug pits or into masterfully built secret chambers, they said to their beloved deities, “Be safe my Lord as long as it pleases You”.

From this emotionally charged happenings of the12th century invasions we come to the present - not in Tamil Nadu but in distant New York, says Vijay Kumar, where schemes are being hatched to steal and smuggle out idols into museums and collections of atrociously rich people. The saddest part of this true story is that those who are colluding with outsiders, and the brain behind the thefts are all Indians.

Even more painfully shocking, he says, is the way the temple management in Tamil Nadu seems to have been designed, fitting the agenda of the idol stealing cartel. For example, the 1993 amendment that Tamil Nadu legislature made to Section 380 of the Indian Penal Code (IPC) hands down a seven-year prison term for someone who steals from a house, but it’s just a maximum sentence of three-year imprisonment and a fine of just Rs 2,000 for stealing from a temple.

Similarly, the idol wing operating under economic offences wing is the most starved of all units as a placement here is shunned and seen as a punishing transfer. If this is the case with the police and legislation, the Hindu Religious and Charities Endowment Board (HR&CE) seems to be a department that cares next to nothing about proper documentation of the idols and sculptures. All of these together have contributed to setting up ancient temples of Tamil Nadu and their spiritual/cultural treasures easy hunting ground for the 'art collectors' of the world.

The network, Vijay Kumar, reveals is super-efficient in its operations. It’s manned by academics who provide the essential paperwork backup for the smuggled artifacts, by which the receipts and letters of provenance proving that the sculptures were obtained before 1972 are created. Why 1972? The author explains that any object older than a century, which had been taken away from India after 1972, would have to be returned to India forfeiting any compensation.

When Vijay Kumar tracks a particular idol and tries to prove that they were present in India after 1972, all efforts are taken by the other side to prove that he is wrong. It is amazing to see that those who were openly plundering the Asian and African nations have now transformed into ‘suave’ pirates with their trails covered by impeccable documentation.

The way the National Gallery of Australia tries to scuttle the efforts of Indians to get back the stolen Shiva shows how the colonial pirate is still alive inside the well-dressed, sophisticated Western scholars and connoisseurs of ‘oriental art’.

At the centre of the current ring of idol thieves that has been uncovered is Subhash Kapoor and his ring of low-level cronies operating in India in the form of artifact dealers etc. People like Sanjeevi Asokan, Deendayal, Aditya Prakash, Shantoo and Kader Batcha are named and shamed in the book.

Reading the book, a friend wondered if we were the last generation to even see gods in living temples as the society in suicidal selfishness loots its own temples, selling their gods and goddesses with masochistic perversion.

The glimmer of hope lies in the coming together of a selfless group, thanks to the internet. Through his net-based India pride project as well as his immensely popular and scholarly blog 'poetry in stone', Vijay Kumar is generating the awareness over the importance of documenting sculptures and closely monitoring their presence and safety.

His book talks about 'Indy' - an extraordinary officer from the US, whose real name cannot be disclosed. It was he who worked hard on the other side of the planet to nail these idol thieves. Yet he was reassigned before things could come to their logical conclusion. Vijay Kumar speaks of 'Indy' as a person who 'understands and cares more deeply about Indian heritage and culture than most Indians I know.'

The book immerses you in pain, shame and anguish, where the readers identify themselves in spirit with the victories of Vijay Kumar, and at the same time feel the agony he faced at every setback. The book is the record of a cultural holocaust in which the very victims also act as traitors and collaborators.

Has the immense sacrifice of our ancestors to preserve our deities gone in vain? The deities we are ready to give away are the ones we seek to fulfil our worldly demands.

The fire that burned in our ancestors has been, perhaps, reignited in volunteers like Vijay Kumar, who towards the end of the book tells the idols waiting to be recovered, “Be safe my Lord as long as it pleases You”.

The agony of India speaks through this book. Make sure your heart hears it too.