Shakti Sinha’s Book Gives An Insider’s View Of The Vajpayee PMO, And Of His Mission For His Motherland 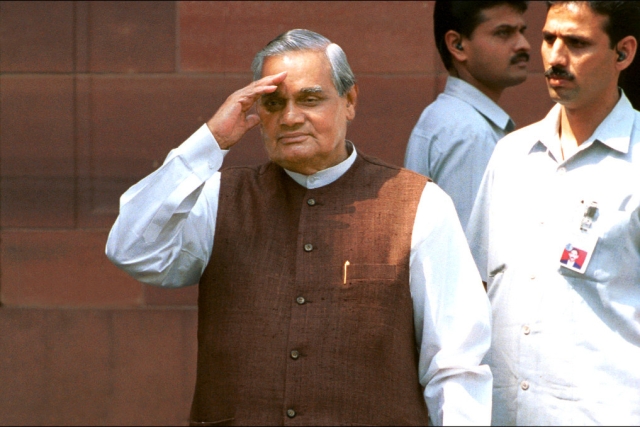 Why was it that Atal Bihari Vajpayee could not get Jaswant Singh to be the Finance Minister though Singh was his choice?

The general impression among the political observers is that the then RSS chief, K S Sudarshan, did not want Singh in the Finance Ministry because his economic ideas clashed with the rigid Swadeshi stand of the RSS.

But there is an alternative explanation, writes Shakti Sinha in this book: ‘. . . it would have looked bad if those who’d just lost elections were made ministers’. Sinha then goes on to show why this explanation is more credible than others.

Shakti Sinha, who points this out in his very recent book on Vajpayee (Vajpayee: the Years that Changed India) had served as a close associate of the latter when he was the prime minister.

Where he makes informed guesses, which could well have been passed on as facts, as most probably they were, he states clearly, that they are guesses.

It is this curt honesty that runs through the book, with facts rather than narrative bordering on fiction, that makes it interesting for the reader and valuable for history.

The Vajpayee that Sinha brings out is a person who does not stay in power for the sake of it. To Vajpayee, occupying the prime ministerial seat is not a personal achievement in itself.

Rather, he sees it as a opportunity to transform India. But in his first years in office, he has to struggle with petty politics and bloated egos of his coalition partners.

Between core values and opportunistic compulsions of coalition politics, Vajpayee constantly walks on the edge of the razor, always aligning with the former, till he gets toppled by one vote.

Sinha narrates the facts as they unfold, of course, with an admiration for Vajpayee — revealing the agony of a great man whose ambition to be prime minister owed primarily to his desire to transform India at an incredible speed.

In between, we have the sordid episode of the Graham Staines murder — a horrible and unjustifiably inhuman act provoked by the aggressive proselytisation of indigenous peoples.

With no solid evidence for culpability, the Bajrang Dal gets blamed in the process, and every one tries to capitalise on this inhuman act. The propaganda of Christian persecution was used to the maximum against the Vajpayee government.

The book reveals that Vajpayee himself was genuinely pained by the incident, but the Opposition wanted to use it as an 'indicator' of the 'shape of things to come' — to portray the BJP government as some kind of an Indian version of the Third Reich.

The book also points to 'the activist role of the National Commission for Minorities (NCM), post-March 1998'. The members of the NCM seemed to have been appointed more for their anti-BJP stand than for their concern for the welfare of the minority communities.

When the NCM sends its team to Gujarat as early as 1998 on the pretext of looking into the 'attacks' on Christian proselytisers working in tribal areas, the team consists of, among others, Marzban Patravala, a Samajwadi Party activist who had lost the 1996 parliamentary elections on that party’s ticket; John Dayal, who had authored a pamphlet for the Catholic Bishops Confederation of India in 1997 on the occasion of the fiftieth year of India’s Independence, arguing for reservation for ‘Dalit’ Christians; and Javed Anand (who later attained prominence along with his wife, Teesta Setalvad, in the aftermath of the Gujarat riots of 2002).

Clearly, the hatred and the organised hate campaign that Modi faces today, Vajpayee faced decades ago.

The hypocrisy in the anti-BJP camp is revealed by Shakti Sinha when he highlights the sacking of the Navy chief, Admiral Vishnu Bhagwat, whose wife and lawyer Niloufer Bhagwat ‘accused the government of acting on communal lines’ as the ‘three of the key players in this issue — George Fernandes, Admiral Sushil Kumar and the then defence secretary, Ajit Kumar — were all Christians.’

So, while on the one hand, the Vajpayee government and the Sangh Parivar were blamed for Christian 'persecution', on the other, Vajpayee was blamed for favouring Christians in the topmost ranks of the Indian defence.

As if all these were not enough, the bureaucracy loyal to the old Congress dispensation created its own problems.

When Sonia Gandhi complained about 'changes' made in the security set-up in her residence, there seemed to have been an insider in the Special Protection Group who had helped draft the letter of complaint.

Later, Bharat Vir Wanchoo, involved in the security arrangements for the Nehru-Gandhi family, became the director of SPG under Manmohan Singh and after retirement, was made the Governor of Goa.

Vajpayee had to face an embarrassing moment when during the NAM conference at South Africa, Nelson Mandela made a not-so veiled critique of the Indian nuclear tests.

Vajpayee, though civil, was furious. The Ambassador to South Africa then was L.C. Jain, an establishment Gandhian and political appointee of the previous I.K. Gujral government.

Without making any insinuation, Sinha underlines an important ethical point that he could not understand: 'why Jain did not quit on his own since it was clear that he was not on the same page as the Vajpayee government.'

As a reader, the only conclusion I could arrive at is that an establishment Gandhian — Jain — could not resist the temptation of seeing a BJP prime minister being embarrassed by Mandela.

Both the coalition partners and Opposition, particularly the ever-mercurial Jayalalithaa, ever scheming Subramanian Swamy and ever power-seeking and internally seething Sonia Gandhi, all come together to mercilessly and diabolically bring down Vajpayee.

Still, Vajpayee would rise again — a democratic phoenix — and achieve his vision of India’s transformation. And that was no path of roses either.

Today, two decades after those bitter sarcastic lines were put in print, we see how Vajpayee’s National Highways Development Project (NHDP), which includes the Golden Quadrilateral, has changed India irreversibly for the better.

Sinha, as ever always, goes beyond the obvious and shows the deeper vision of Vajpayee.

The project was not just ‘a bid to revive the demand for steel and cement, and to create construction jobs’, as most considered:

Vajpayee’s idea behind it was the creation of one Indian market where logistics would not be a constraint; the time and cost savings would be humongous and could help promote investment and competitiveness in the economy.

Whether it is telecommunication networks, taking education to the remotest places in a cost-effective and efficient manner through Sarva Shiksha Abhiyan, the Vajpayee government had contributed significantly to India’s long lasting positive transformation.

The telecom policy is a case in point that Sinha brings out vividly in his own style.

The allowing of private players in telecom by the Narasimha Rao government resulted in an overestimation of initial demand, either because of inexperience or bad advice, which, in turn, resulted in a massive mismatch between revenues realised and fees payable to the government.

It was Jaswant Singh who strongly advocated moving to a revenue-sharing model, to which there was considerable opposition even within the government and in the cabinet.

Articles were written against the move. There was public interest litigations. Unlike the 1994 telecom policy, which never went to the Parliament, here the Delhi High Court decreed that the policy be okayed by the Parliament and meanwhile, the government fell.

It could be passed only in late 1999. While in 2019, India takes for granted its highway infrastructure and telecommunication, ‘It was Vajpayee’s firm conviction and support that allowed the proposal to sail through’, says the author.

The author has remarkably succeeded in bringing out the strong iron-willed character of Vajpayee, with his gentle exuberant outside.

The book shows how Vajpayee, balancing the problems of real polity, having to carry with him a coalition pulling in diverse directions, remained focussed in his aim of creating a better future for India — moving steadily to secure its rightful place among the world nations.

That was no ordinary feat. But then, Vajpayee had a secret weapon which the author reveals:

The Ramcharitmanas of Goswami Tulsidas had a profound impact on Vajpayee, and he refers to it as his source of inspiration. According to Vajpayee, the comprehensive view of life that it presents has no parallel in the world.

Given the power of that weapon, it is no wonder that Atal Bihari Vajpayee achieved what he did for Mother India, crossing the ocean of impossible obstacles.