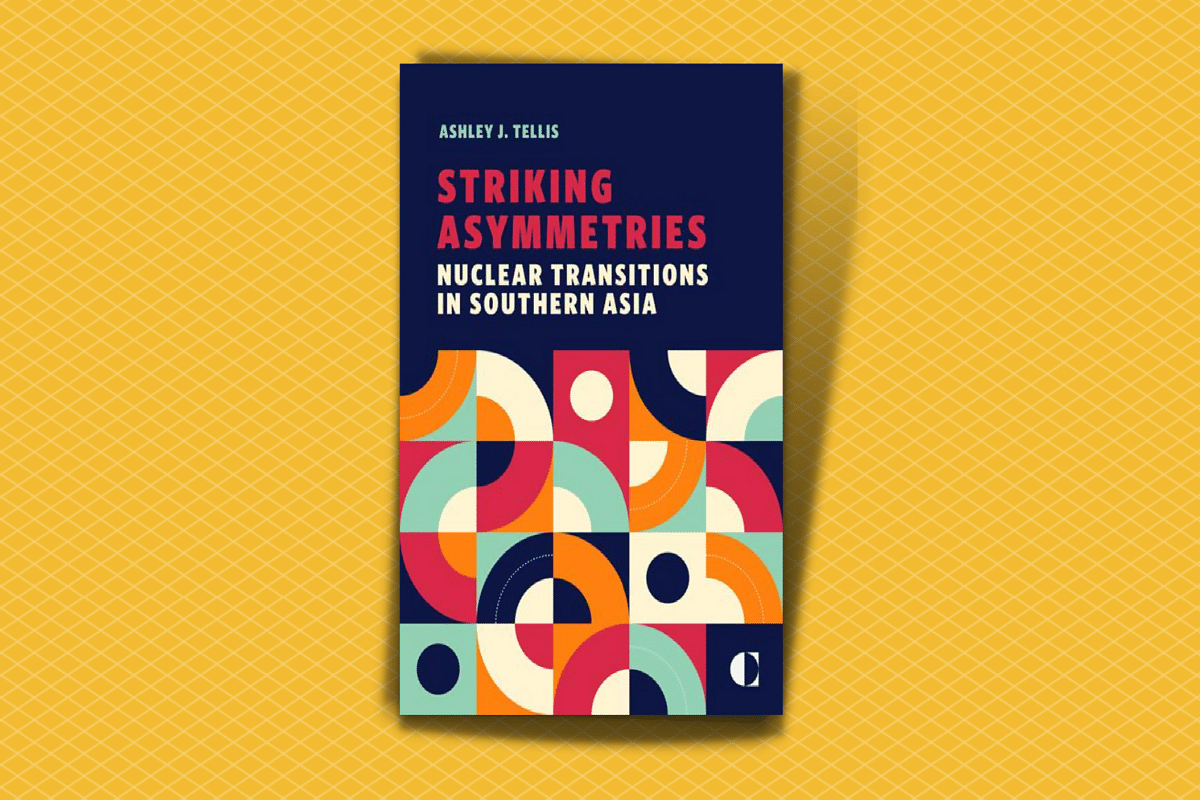 There was renewed interest in the India-Pakistan nuclear weapons dynamic after the 2019 Pulwama attack.

Conversations about retaliation against Pakistan-sponsored terrorism were tempered, like in each earlier instance, by the nuclear overhang that casts a shadow on diplomatic and military relations between the two countries.

The 2020 India-China skirmishes in Ladakh raised the spectre of armed conflict between the two nuclear powers with a No First Use policy.

But where Pakistan’s nuclear weapons programme has received considerable — and often breathless — coverage in the Indian media in the past, China’s weapons have been mentioned in passing.

Against this backdrop, Striking Asymmetries: Nuclear Transitions in Southern Asia by Ashley J Tellis casts an opportune light on the India-Pakistan and India-China nuclear dyads.

The book begins with a review of China’s nuclear weapons programme.

Tellis highlights the leadership’s initial reluctance to contemplate the development of nuclear weapons, tracing its origins to traditional Chinese strategic thought, as well as Mao’s inability to reconcile the transformation wrought by nuclear weapons with Marxist theory.

This reluctance is later contrasted with the clear appreciation of nuclear weapons' utility by India’s post-independence leadership. The contrasts, unfortunately, do not end there.

After America’s nuclear sabre-rattling during the Korean War and the First Taiwan Strait Crisis of 1954 forced the Chinese leadership to reevaluate their initial opposition, China began developing nuclear weapons — initially with Soviet help and later on their own after the Sino-Soviet split ended cooperation.

After tracing China’s path from Mao’s reluctance to their nuclear doctrine during the Cold War and the Deng years, the book summarises changes wrought by the post-Deng leadership. The transformation currently taking place — a difference of degrees, not of kind — is covered at the doctrinal and operational levels.

The rapid increase in the number and diversity of warheads and delivery platforms is analysed in significant detail, with an illuminating dive into fissile material production facilities for highly enriched uranium (HEU) and weapons-grade plutonium (WGPu).

The orbat of China’s nuclear forces, spanning the PLARF, PLAN, and PLAAF, paints a succinct picture of the challenge facing China’s adversaries in the Indo-Pacific.

The Chinese leadership doesn’t appear content anymore with maintaining a “token nuclear force,” and seeks the means for more rapid retaliation for a nuclear strike on its territory.

Despite significant growth in warhead inventory, it doesn’t appear interested in chasing after the massive nuclear arsenals of the United States or Russia.

The author reasons, based on a lack of evidence of efforts to improve accuracy of delivery platforms, that the fundamental strategy of countervalue retaliation — nuclear attacks on soft targets like population centres — isn’t being junked in favour of a counterforce one, where a nuclear first strike seeks to wipe out the enemy’s nuclear arsenal.

Chapter two is dedicated to the Indian nuclear weapons programme and serves to highlight similarities and contrasts between the Indian and Chinese approaches.

Where Chinese leadership pivoted and hurried, the Indian leadership — despite Dr Homi Bhabha’s exhortations — let their own inhibitions about nuclear weapons impede progress.

The author highlights how this delay resulted in India ending up on the wrong side of the Treaty on the Non-Proliferation of Nuclear Weapons. The Indian nuclear programme would only be relieved of this millstone after signing the 123 Agreement with the United States in 2005.

Tellis does a credible job of analysing and explaining India’s nuclear doctrine. India’s No First Use policy, the book argues convincingly, flows from the firm belief of Indian policymakers that deterrence is better served by maintaining a strong “firebreak” between conventional and nuclear conflicts.

Coupled with maintaining a credible minimum deterrent, and the threat of massive retaliation, the Indian establishment seeks, much like the Chinese leadership, to use its nuclear arsenal to ward off the possibility of nuclear war.

Like in Chapter one, the book reviews the stock and flow of India’s nuclear arsenal, analysing the number of warheads, the amount of weapons-grade fissile material available, and India’s ability to repurpose civilian reactors not under safeguards for creating WGPu at short notice.

The author touches upon the controversy regarding the yields of India’s nuclear weapons test in 1998 (Shakti-I, II, and III; see note at the end). But unlike in other instances where wide variation in data is acknowledged — and ranges used for analysis — the book proceeds with the assumption that India’s weapons are incapable of the yields claimed by the Indian establishment.

There is even a gratuitous remark about the quality of Indian manufacturing, bereft of any supporting data or references, which appears intended to justify the low yield values assumed by the author. This is the first of a few jarring deviations from what is, until this point, a balanced review that presents differing opinions.

In reviewing India’s delivery platforms, the book seeks to address speculation — based on improving the accuracy of India’s ballistic missiles — that India is moving from a countervalue strategy to counterforce.

With the introduction of this third leg of the triad, India has had to change the procedures deployed to ensure civilian control over nuclear weapons.

As SSBNs embark on deterrence patrols, they carry SLBMs with mated warheads. This is unlike land-based ballistic missiles, whose warheads are stored separately under the control of employees of the Department of Atomic Energy (DAE) and the Defence Research and Development Organisation (DRDO).

This provides for an interesting segue into a discussion about the Command & Control systems and procedures deployed by India’s Strategic Forces Command, as well as India’s four-stage nuclear alert system.

A history of Pakistan’s nuclear weapons programme, which marks the beginning of Chapter three, understandably glosses over the role of European and North American entities in enabling Abdul Qadeer Khan’s nuclear espionage in the 1970s and 1980s.

Apart from schematics and knowhow, this also includes components, systems, and entire plants deployed at what is now the Khan Research Laboratory at Kahuta.

The analysis of Pakistan’s nuclear doctrine delves into the establishment’s conception of nuclear weapons as usable military instruments, contrasting it with both India and China, where policymakers consider them political instruments instead.

The frightening implications are moderated, in the author’s opinion, because these weapons are not ordinarily available to tactical commanders. This contrasts with other analysts who opine that in crisis situations, mid-level theatre commanders could decide to launch Pakistan’s tactical nuclear weapons, making tenuous the notion of absolute control exercised by the National Command Authority.

The discussion on a doctrinal shift from credible minimum deterrence to full-spectrum deterrence — the use of low-yield warheads at the tactical level for deterring conventional military operations by India — makes for interesting reading, with the author deftly using statements by Pakistani authorities to extract meaning from deliberate ambiguity.

A detailed analysis of Pakistan’s fissile material consumption — for civilian and military purposes — as well as its production capacities follows, leading to the conclusion that Pakistan is operating at or near the limits of its available uranium supply.

It will be difficult for Pakistan to speed up the pace at which they are growing their arsenal without illegally buying uranium from outside sources.

The review of Pakistan’s warhead designs is brief, and Pakistani claims of yields and diversity of designs are surprisingly accepted — unlike in India’s case — with little argument.

Which is unfortunate, because a detailed discussion of Pakistani warhead designs would have formed an enriching main course to the entrée of full-spectrum deterrence, before segueing into delivery platforms.

The final chapter assesses the stability of each nuclear dyad in isolation.

Within the India-China dyad, Tellis indulges in a fair bit of numerical simulation to evaluate hypotheses, concluding that the dyad is stable.

But there is a caveat: China’s strategic defences — currently under development, with large phased-array radars for early warning of missile launches already deployed — are expected to complicate the situation.

Strangely, the author doesn’t consider India’s own ballistic missile defences. The exo-atmospheric and endo-atmospheric interceptors have been successfully demonstrated on multiple occasions, most spectacularly during India’s anti-satellite weapon test in March 2019.

The Swordfish Long Rage Tracking Radars, which have detected and successfully enabled 10+ missile interception tests until 2019, have been operationally deployed since 2017.

The S-400 systems bought from Russia also have ballistic missile defence capabilities. Incorporating these developments might have yielded a richer projection of stability in the dyad in the near future.

Regarding the India-Pakistan dyad, the author notes that Pakistan’s efforts to use the nuclear shield to conduct hybrid warfare against the Indian state without severe consequences serves as a destabilising factor.

The rapid pace at which Pakistan is expanding and diversifying its weapons and delivery platforms inventory — a pace that India has not yet sought to match or exceed — exacerbates this instability.

The book serves as a detailed introduction to the Chinese nuclear weapons programme, and its comparison of doctrines and delivery platforms — Chinese, Indian, and Pakistani — brings out similarities and differences rather elegantly.

It would, however, have been better served with a less jaundiced view of Indian capabilities, especially demonstrated ones.

Note: On the yield controversy

After the Pokhran-II tests, analysts studied the seismic signals generated and tried to estimate the yield based on that data. Complicating their efforts were two broad problems:

This raised the possibility that interference between the seismic waves of the simultaneous detonations might have resulted in a signal strength that was less than the sum.

(2) The geology of the test area at the depths where the explosions took place wasn’t known, requiring several assumptions that couldn’t be validated.

As expected, there is a wide variation in yield values calculated by different analysts. This detailed survey of various results — and original analysis — by Carey Sublette provides a look into the complicated nature of yield estimation and the variability of results.