The Meaninglessness Of Reparations 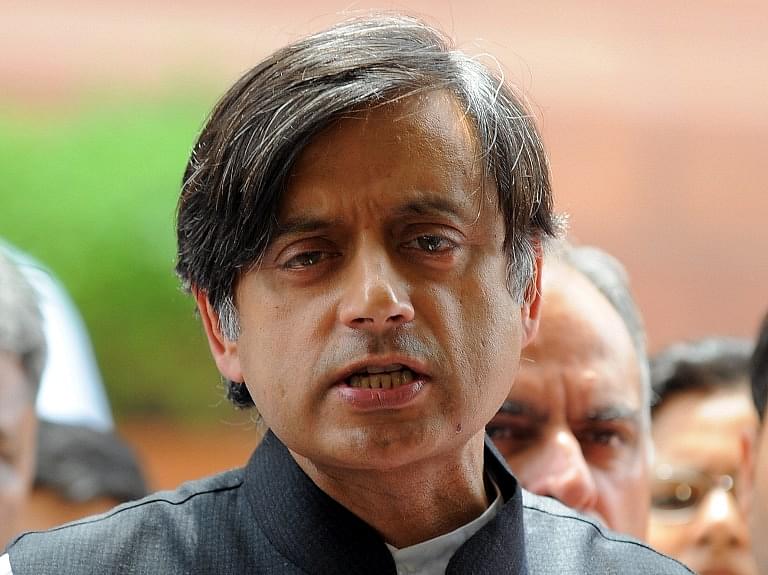 Recently, the Oxford Union debated whether Britain owes reparations to its former colonies. Participating in this event as a speaker was Congress MP from Thiruvananthapuram, Shashi Tharoor. In a speech that has since gone ‘viral’ on the web, Tharoor claimed that Britain does owe reparations to its colonies and gave his reasons for thinking so. Here, Sandeep Balakrishna reacts to the now-famous speech of Tharoor.

The calm after the storm is always a nice place to mull over everything the storm has accomplished. Effusive praise like noisy denunciation share a common strand: noise.

And so it is with the Congress MP from Thiruvananthapuram, Shashi Tharoor’s much-gushed about recent speech at the Oxford Union.

Shashi Tharoor firmly belongs in the class of Indian English writers who Richard Crasta profiles in his courageously irreverent and heavily underrated “Impressing the Whites” as convent-educated high school boys who write perfect essays in English, eager to show them to their English Teachers and Headmasters, confident of winning that laudatory pat on the back. Other pioneers and notables in this Crastan category include Salman Rushdie, Pankaj Mishra, and Arundhati Roy.

The same applies in varying degrees to the manner of high school elocution and debate competitions: contestants coming prepared with key points scribbled in small handwriting on tiny scraps of paper.

The most distinguishing feature about Shashi Tharoor is his carefully sculpted career: from emerging from the hallowed portals of the colonial-missionary St. Stephens College to obtaining a PhD at 22 to serving the UN for nearly 30 years and then becoming a full-fledged politician belonging to the Indian National Congress. He peppered this distinguished record with 15 books, innumerable columns in widely-read publications and a blazing trail of speeches and debates. Whatever reputation and distinction he has earned therefore, rightfully belongs to him and none should grudge him for that.

Yet, this sort of spectacular career-blazing especially in public life has its pitfalls if one is not careful—more so for a lifelong, image-conscious careerist like Tharoor. One can cynically argue that the Oxford Union speech is yet another of Tharoor’s incessant attempts to woo Narendra Modi in order to save himself from the Damocles Sword of his wife Sunanda Pushkar’s murder investigation.

However, Damocles Sword or not, his speech can be analyzed independent of such cynicism.

First, Shashi Tharoor’s speech indeed was a fine showpiece of refined public debate, complete with its superb packaging: dressing that perfectly blended in with that august stage, and the spectacles dangling around his shoulders, an unnecessary appendage but made for great optics. Expectedly, it went “viral” all the way up to earning praise from the Prime Minister—Headmaster and all.

Now to the actual speech itself.

Tharoor’s target audience comprised an important and influential segment of those Brits who love their Royalty and their traditional colonial institutions, and so, a Tharoor who admiringly invokes his Henry VIII School of Public Speaking pedigree instantly endears himself to this constituency.

Add to this base-ingredient a mixture of the right anecdotes, calculated timing to elicit the laughs and the applause, you have that particular audience in thrall. And further, stir this up with the perfect Brit accent—hiss the sibilants, roll the Rs, dim the schwas, and wow the audience with the perfect intonation of “no wandah!”

And ultimately, garnish this with the appropriate tone and phraseology of scolding them for their historical crimes to generate the right amount of outrage, no wandah, you have a winning speech with fantastic quips like “and no wandah, that the sun never set on the British Empire because even God couldn’t trust the English in the dark,” a quote originally attributed to Rev. W. B. Brown and Abraham Lincoln among others, a fact that Tharoor fails to mention.

The little-known but erudite literary critic John Dolan, in a brutal takedown of Arundhati Roy mentions how the old British “Lefties” love a good scolding from their former colonies—even better if the native scolds them on their own soil. Hence the munificent applause when Tharoor chides them for their colonial atrocities—from reminding them of Clive’s crimes, the chopping off the native weavers’ hands, racism and the rest.

Indeed, the deceptive beauty of Shashi Tharoor’s speech is how he reels off historical instances and facts and figures of the economic horrors of British colonization of India, couching them in attractive verbiage but actually telling us nothing that an Indian high school student doesn’t know of how colonial Britain reduced India from its preeminent position of the world’s largest economy to a beggar nation.

However, Shashi Tharoor doesn’t have a single word on the far greater, and cold-blooded destruction of India’s timeless cultural, spiritual, philosophical educational systems of India. Not even a whimper of outrage or a mistaken mention of Dharampal’s painstaking and lifelong documentation of this English-engineered cultural genocide against the Indian people. Or on the continuing irony of an alien language towering over “independent” India for nearly seven decades.

To put it in very mild terms, this destruction was made the official British policy of creating generations of rootless Indians of which Shashi Tharoor is himself both a shining product and eminent victim.

Glimpses of this are visible in his novel, Riot where Tharoor devotes substantial portions to showcase his fondness for Oscar Wilde via the protagonist, Lakshman, a devout Tamil Brahmin Government official who eventually beds theAmerican researcher using Wildean flourishes.

Not that one should begrudge Tharoor’s fondness for Wilde but the characterization of this devout Tamil Brahmin as wielding more expertise in Wilde than traditional Hindu texts strikes us initially as ludicrous until we learn that he, like Tharoor, is a deracinated graduate of St. Stephens, in turn, an institution established to further the Macualayean enterprise in India. Lakshman is a character whose deracination is so thorough that he characterizes his own ancient culture in an alien tongue.

And as he approaches the end of his speech damning British colonialism at length, Tharoor makes the just demand (is it plea?) for reparations from Britain. And just when we’re waiting for him to take this demand to its logical, confident conclusion, he suddenly, respectfully withdraws and houses the same sharp sword back into its scabbard with the “one pound a year” reparation remark as a mark of Britain showing atonement for its colonial sins, as a matter of principle.

All this after quantifying the losses and the loot and the rest suffered by India at the hands of the British.

True courage and confidence would have implied a righteous demand and follow- up-to-conclusion of the return of British loot of India—the United Kingdom’s various Crown Jewels stolen from India, the priceless, robbed artifacts, idols etc auctioned at Sotheby’s and other places, and similar loot.

Adhering to a principle is meaningful only when it is lived by people and nations that claim such adherence.

Indeed, the speech of Chaim Herzog, Israel’s representative to the UN in the aftermath of the 1976 “Operation Entebbe” against Uganda serves as an emulative model for confident nations demonstrating that courage, like character, is independent of applause and often demands loneliness.

Sadly, Shashi Tharoor chose the latter demonstrating the truth of what I said in the beginning: effusive praise is also noise.

The writer is the Director and Chief Editor, India Facts Research Centre, the author of Tipu Sultan: the Tyrant of Mysore, and has translated S.L.Bhyrappa's Aavarana from Kannada to English.
Get Swarajya in your inbox everyday. Subscribe here.
Tags: