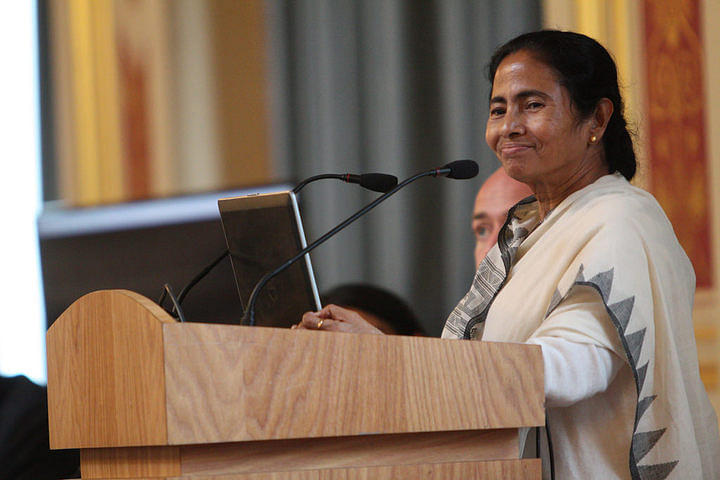 Statistics are often cited by duplicitous politicians to not only conceal the truth, but also spread falsehoods. And this has been the case with business summits in Bengal.

At the conclusion of the third edition of the rather grandiosely-titled ‘Bengal Global Business Summit’ (BGBS) on Saturday, Bengal Chief Minister Mamata Banerjee announced, to thunderous applause from assembled businessmen, bureaucrats and others, that investment proposals worth Rs 2.35 lakh crore had been received at the summit.

But lest the poor, credulous and largely illiterate populace of the state gets floored by this gigantic sum that is said to be coming into Bengal and thereby creating jobs and economic opportunities for them, a close scrutiny of the investment proposals is required to expose Banerjee’s lie.

First, a major chunk of the so-called proposed investment proposals is actually planned Central government-sponsored investments worth Rs 23,590 crore in the infrastructure sector. This includes the work going on for expanding the Kolkata Metro rail network. This can hardly be touted as an investment which is the result of Banerjee’s business summit. Summit or no summit, the Union government would have put in that sum for developing physical infrastructure in the state in any case.

Before going further, it is important to understand the purpose behind organising such a business summit with the tax-payers’ money. A summit like this is supposed to draw investors from beyond the boundaries of a state and even the country and showcase the state as a prime investment destination. MoUs are signed between the state and investors at such summits for setting up brick and mortar industries, ports, airports, business establishments (including e-business establishments), and ventures in the IT and related sectors. Such investments are expected to create jobs and contribute to the state’s economy. Money that is to be spent on routine infrastructure projects in a state by the Union Government should, logically, not be announced as fresh investments in a state flowing out of a business summit.

Also, while not all the MoUs signed at such meets between private investors and the state government may translate into actual investments on the ground for a variety of reasons, a summit can be deemed to be successful if 60 per cent of such MoUs fructify, as is the case with states like Gujarat, Karnataka, Maharashtra and Haryana, to name a few. By Banerjee’s own admission, only about 40 per cent of the investments announced at the last two business summits she hosted in 2015 and 2016 “are in the implementation stage”. Officials revealed that of these, most are still on the drawing boards and detailed project reports (DPRs) of many of them are being prepared. There is no guarantee that those investors will actually start investing in the state even after the DPRs are ready and all formalities done with. So much for what, in Banerjee’s own words, were “tremendously successful” business summits in 2015 and 2016 that (Banerjee’s claims) that supposedly netted investments amounting to Rs 2.43 lakh crore and Rs 2.5 lakh crore respectively.

The next biggest takeaway from the three-day jamboree that got underway on 19 January was an investment proposal worth Rs 27,200 crore by a Chinese engineering company TEB that makes transit elevated buses that have just been introduced in China. TEB will inject that amount into Texmaco, a Kolkata-based heavy engineering unit making railway freight cars. However, according to some senior Texmaco executives, the agreement with TEB was reached quite some time ago and TEB will deploy its own trained manpower to make the buses (meant for exports to other countries) at the Texmaco plant. Thus, not only is this investment proposal not the result of BGBS 2017, but few, if any jobs, are going to be created for locals as a result of this investment. And the state will earn little revenue from this venture.

The next biggest investment proposal, according to Banerjee, was one by construction giant Shapoorji Pallonji, which will sink in Rs 24,000 crore for housing and other projects. It does not need even an undergraduate to figure out that housing and civil construction projects create barely any permanent jobs and add nothing to the gross state domestic product (GSDP). It didn’t need a business summit to get a construction major to build upscale apartments in the state! According to the BGBS 2017 website promoted by the event’s organiser, the West Bengal Industrial Development Corporation (WBIDC), the third largest investment is Rs 22,000 crore to be sunk into a ‘industrial growth triangle corridor’, an infrastructure project involving construction of roads, bridges, flyovers, warehouses and other facilities. This, again, has been on the anvil for sometime and would have happened even without BGBS 2017 taking place.

The website lists the fourth major investment proposal of Rs 18,000 crore for constructing a MSME (micro, small and medium enterprises) hub. The ‘hub’ means buildings, storages, roads and other infrastructure within an area. Other states have also constructed such ‘hubs’industrial parks/technology parks etc without including the cost of construction of such hubs in the accruals from their business summits. Only West Bengal does so to proclaim the success of a failed business summit.

Next comes an investment of Rs 12,500 crore by Reliance Telecom in creating telecom infrastructure; this was again a planned investment and not the result of the summit. Ditto with Rs 12,000 crore for a new port at the seaside destination of Tajpur in the state - this mega project has been on the anvil for some years now and this is not a fresh investment as a result of BGBS 2017. Other major investments included expansion of operations by existing industrial units in the FMCG, IT, ITeS, cellular services, hospitality and medicare sectors. Once again, such expansions could definitely not have been the outcome of the BGBS 2017 and would have occurred anyway, summit or no summit.

A senior WBIDC official put the whole issue in perspective: “It must be remembered that no industrialist or entrepreneur comes to such a business summit in any state and commits investments straightaway. They are hard-nosed businessmen and while the lavish hospitality at such a summit may please them, they will take a long and hard look at a state before committing themselves and their money. At best, those invited to BGBS 2017 would be motivated to consider the state as an investment destination. But they will carry out surveys, make serious enquiries and then commission studies on the viability of investing in a state. Only then will they make the first move, and this process could take up to a year,” he said.

What the WBIDC officer said, in effect, was that no businessman/entrepreneur/potential investor who was extended lavish hospitality (business class air travel, stay at five star hotels, police escorts etc) by Mamata Banerjee at her jamboree could have been overwhelmed enough to announce investments in Bengal at this summit itself. So why organise such a lavish jamboree, which even by conservative estimates would have cost the state exchequer at least Rs 60 crore, when nothing much came out of it? Mamata owes an answer to taxpayers of the state and the country.