Darjeeling Stares At A Crisis As Its Golden Leaf, Called The ‘Champagne Of Teas’, Is Going To Waste 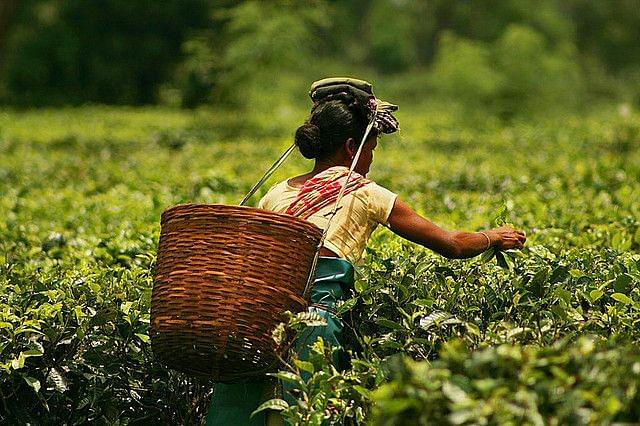 The leaf that yields the golden brew is withering away, and that spells grave trouble for the fragile economy of Darjeeling Hills.

Darjeeling tea, which is globally acknowledged as the ‘champagne of teas’, is facing an unprecedented crisis. The plucking of the premium ‘first flush’ crop had to be suspended due to the ongoing lockdown.

As a result, the leaves are wasting away in the bushes without being plucked. The first flush, which is the first crop of the year after the winter hiatus, commands a premium and most of it is sold in the international market at very high prices of up to Rs. 1.5 lakh per kilo.

Darjeeling Hills have 87 tea gardens whose revenue makes up a large chunk of the state’s economy. The economy of the hills is fuelled solely by tea and tourism, and both have suffered debilitating blows due to the Coronavirus scare and the subsequent lockdown.

The first flush tea gives the much-sought-after golden-coloured brew that has a flowery muscatel aroma (read this and this).

“The first flush is the favourite among tea connoisseurs all over the world. This tea is delicate and commands a premium,” said the legendary Rajah Banerjee who was the third-generation owner of Makaibari, the oldest tea estate in Darjeeling Hills.

The plucking of the first flush takes place from mid-February to early April.

“Only a small portion of the crop was plucked, but the lockdown started before it could be processed in the factory. So even the plucked leaves have gone to waste,” said a senior manager of a tea garden of the Goodricke group.

If the leaves are not plucked in time, they lose their character and are of no use. “Tender leaves and buds make for the best teas and so they have to be plucked just at the right time. Leaves are plucked from each bush multiple times at an average interval of five days,” explained the Goodricke manager.

Though the speciality teas are made in very small quantities, they are the pride of a garden. Last year, one kilo of a speciality tea made by a garden in the higher reaches of Darjeeling Hills fetched over Rs 2 lakh. Only four kilos of that tea was made.

Planters regret that this year’s first flush would have made excellent teas. “We had good rains in the winters and since mid-February, the temperature started rising. These are the ideal conditions for a good first flush,” said Darjeeling Tea Association (DTA) chairman Binod Mohan.

Though the Union government allowed relaxation of the blanket lockdown for the tea industry on Friday, salvaging the first flush is impossible now. “At best, we can hope to salvage a major part of the second flush crop,” said Binod Mohan.

Goodricke managing director Atul Asthana explained that even if the state government issues a notification immediately allowing 50 per cent of a garden’s workforce to start working right away, the first flush is lost.

“The (tea) bushes have not been pruned and are overgrown now. A lot of weeds have sprouted. Getting the bushes back into shape will take three weeks to a month. After that, it will take about two to three weeks for fresh leaves and buds that can be plucked, to sprout. So, the first round of plucking of the second flush tea (read this) can take place only by early to mid-May,” said Asthana.

That, in effect, means that more than half the second flush crop will be lost. The plucking season for the second flush stretched from mid-April to early June. The second flush also commands a premium (read this) and accounts for about 35 per cent of a tea garden’s annual revenue.

Anshuman Kanoria, chairman of the Indian Tea Exporters’ Association, said that the 87 tea gardens in the Darjeeling Hills are staring at a cumulative loss of hundreds of crores of rupees.

“This is the second body blow to Darjeeling gardens; the first was the 104-day shutdown due to the movement for a separate state of Gorkhaland in the summer of 2017. That time, many global importers dropped Darjeeling tea from their lists. This time, too, they will do the same,” said Kanoria.

Industry experts say that the tea estates in Darjeeling Hills are yet to recover from the after-effects of the 2017 shutdown and the current lockdown will take them to the brink of disaster. Many gardens, fear Kanoria and others, may not be able to recover from this crisis.

Goodricke managing director Asthana said that the total loss to the tea industry due to the current lockdown will be over Rs 1,500 crore. Indian Tea Association secretary general Arijit Raha also voiced grave concern over the fate of the tea gardens.

Last year, 1.5 million kilos of first flush Darjeeling tea was exported. The 87 gardens, between them, produce about 10 million kilos of tea a year. About 80 per cent of the first flush tea is sold in private sales and the remaining sold through auctions fetch an average of Rs 700 a kilo.

“The best Darjeeling tea is never sold through auctions. Only the lowest grade (mostly monsoon tea) goes to the auctions. The rest are all private sales, where the price is negotiated between the buyer and seller. The private sales happen between the brokers and buyers or even directly between the garden management and buyers,” explained Sudhanshu Goenka, a tea garden owner.

The price that the gardens get through private sales is a closely-guarded secret, but industry sources say the average price through such sales would be in the range of Rs 15,000 a kilo for the domestic market. The premium teas that are exported are sold for a minimum of Rs 30,000 to Rs 50,000 a kilo and a good chunk of it fetches over Rs 100,000 a kilo.

That said, wealthy tea connoisseurs the world over who relish the golden brew that the first flush yields will have to do without it for the next one year.