Explained: Adani’s Plan To Develop One Of Australia’s Largest Coal Mines, The Hurdles It Faced And Its Future 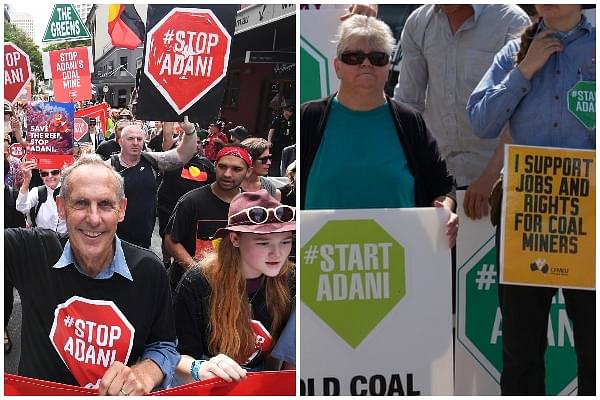 Protest against Adani’s coal mine project in Australia (left) and in favour of the project (right).

One of the world's largest untapped coal reserves, estimated to contain 7.8 billion tonnes of black diamond, may finally be tapped and put to use. After serving as a lightning rod for debate on climate change and environmental protection in Australia for nearly a decade, Adani Group’s ambitious but controversy-hit proposal to develop and exploit the Carmichael mine in the country’s northeastern province of Queensland has crossed a major hurdle—the provincial government has ticked off on the last crucial environmental permit, ending nine years of delay.

The Adani Group had bought the coal tenement in 2010 from Australian company Linc Energy in a cash and royalty deal worth $2.7 billion, the largest single mine investment by an Indian firm in the continent-sized country. But even as it gets down to work, the Adani Group continues to face opposition from the various left-wing groups, and may still need few more permissions before it can finally start digging for coal.

Conceived when the price of coal was relatively high, the project has been envisioned as a ‘pit-to-plug’ solution to feed the Adani Group’s energy vertical. The largest private thermal power producer in the country, it has a number of coal-fired power plants, like the one producing 4,620 megawatt power in Gujarat’s Mundra. Under the ‘pit-to-plug’ strategy, these power plants are to be fed with coal extracted from the Carmichael mine through a rail and port link. To complete the supply chain, the Adani Group in 2011 acquired Australia’s Abbot Point coal terminal for $1.98 billion on a ninety-nine-year lease, which it plans to connect with the mine through a rail link.

Things started to look pretty good for the Adanis as coal prices soared to $124 a tonne in 2011 on the back of growing demand in India, and other Asian countries, especially China, which was hoovering up coal all over the globe. The Indian government was also nudging private players to invest in coal assets abroad and Gautam Adani was not the only who followed the lead. GVK Power, Lanco Infratech and Jindal Steel and Power also invested in coal mines in Australia. The prices of the commodity were expected to increase further as consumption grew in Asia. The Adani Group was all set to jump in with its tools having pumped in billions to acquire the mine and the port and setting up operations in Australia. If only it were that easy.

What caused the delay?

Before it could get going, the Adani Group needed two things: funding, as the project was expected to cost around $16.5 billion, and environmental approvals, most critical of which was the acceptance for its ground water management plan as the company plans to use up to 4.5 billion litres of water a year on average.

But the company ran into troubles as soon as the project appeared on the radars of left-wing groups in Australia. Vocal about climate change, they not just met the Adani Group’s plans with protests, but also moved the Federal Court.

So, is the Adani Group not complying with environment protection laws?

One, the use of water by the Adani Group from the Great Artesian Basin (GAB), the largest aquifer in the world which underlines around 22 per cent of the total land area of Australia and is a source of water for a large part of the country’s population. The Adani Group managed to get a license from the local government for the use of water only in 2017. The protesters have claimed that the Adani Group’s mining operations will drain huge amounts of water from the basin and may also pollute it in the process and suggest that the company has been allowed to use unrestricted amount of water from the GAB for free.

However, these claims do not stand scrutiny. As the Adani Group points out in this ‘fact-check’ sheet released in July 2018, it has only been permitted to use “associated water”, which is the water it encounters during mining. This water will come from local aquifers which are not connected to the GAB.

Additionally, the GBA is separated by a 300 metre thick layer of claystone called the Rewan Formation. This will prevent water from moving between the GAB and the mine, minimising the chances of seepage and pollution. However, to offset any seepage that may occur, the Adani Group “will cap free-flowing GAB bores, totalling 730ML per year for the first five years. In total, 3,650 mega liters water will go back to the GAB”.

The assertion that water will be used by the mine free of cost is also untrue as the Adani Group has paid $20 million for the license to the local government.

The question of misuse of water from rivers in the region has also been dismissed because the Adani Group will only pump water from these rivers in case of flood and after farmers and others have claimed their share.

The group’s ground water management plan was finally approved last week after it presented a dozen versions of the plan over the last 18 months.

Two, possible damage to the Great Barrier Reef (GBR), a coral structure along the northeastern coast of Australia, due to mining activities. But when the protesters claim that that Adani’s mining operations can harm the GBR, they forget that the mining site is around 350 km away from the coral structure that lies between 15 km and 150 km offshore. Moreover, at least four other mines in Clermont, Goonyella, Blackwater and Mt Arthur are much closer to the GBR than the Adani Group’s Carmichael mine.

Following an environmental sediment investigation in April 2017, ordered by the Queensland Government, this charge was dismissed as unfounded. In 2018, a court in Australia also dismissed these claims.

Three, global warming. Green activists say that emissions from the burning of the coal produced from this mine will contribute to rising temperatures globally.

However, the supporters of Adani’s mining project have argued that even as the world moves towards cleaner sources of power, the existing infrastructure, which runs on coal, can’t be abandoned in one go. Additionally, coal consumption in developing economies such as India and Vietnam continues to increase. To cater to this demand, new sources will be needed.

But is the project economically viable?

Protests by influential groups such as the Australian Conservation Foundation pushed the project into sensitive territory, ensuring that Adani was denied funding for the project by all the lenders he approached.

So who is funding the project now? Adani.

To keep the project viable, the Adani has decided to self-finance a significantly scaled-down version of the project. Under the new plan, reports suggest, the mine will cost $2 billion and will produce up to 15 million tonnes of thermal coal per year in the initial phase and up to 27.5 million tonnes per year later. Initially, the group had projected production of 60 million tons of coal a year.

The Adani Group has also decided to scale down the rail link project by building only 200 km spur line from its proposed Carmichael mine to the existing Goonyella line owned by the rail freight company Aurizon. Earlier, the company had planned a 388 km track for a direct link to its Abbot Point port terminal.

Falling coal prices in recent years have not helped either. Between 2010, when the project was conceived, and 2019, when it may finally break ground, the price of coal has fallen drastically, forcing analysts to question the viability of the project. There has been a 40 per cent slump in benchmark Australian thermal coal prices since mid-2018.

According to Rory Simington, a thermal coal analyst with Wood Mackenzie, the Carmichael mine needs a benchmark price of about $80 a tonne to be profitable.

However, the Adani Group has argued that coal market prices don't matter because it plans to use the product in its own thermal power plants in India. Here, it is important to note that Adani's Mundra plant had recently received a significant tariff increase for its power and its Godda plant in Jharkhand, which will supply power to Bangladesh, enjoys tax relief and other incentives.

Who is supporting the Adani group in Australia?

In Australia’s rural, coal-producing, sparsely populated state of Queensland, where the mine is located, the project has received support from the locals as it promises to generate jobs and invest in the local economy.

Job numbers for operational open cut coal mines of a similar size in Queensland employ up to 1800 people and support up to 8000 additional jobs in supporting industries. When the Carmichael mine enters operation we expect it to require a similar amount of operational roles. pic.twitter.com/53YrlhokM4

Supporters of the project are as vocal as the protesters. Locals in Clermont, one of the many coal mining towns in central Queensland that will benefit from the Adani Group’s mine, had shown their support by refusing to serve anti-Adani protesters who came to town and greeting them with ‘Start Adani’ placards.

In the national election this year, which many referred to as Australia’s ‘climate change election’, the issue of coal mining, and by extension, the Adani Group’s project, triggered heated debates between political rivals.

Before the polls, the left-of-centre Labour party, which was in the opposition, had promised drastic power reforms, advocating a move towards renewable sources of energy and away from the country’s major export—coal. The right-wing Liberal-National coalition, which was in power, has supported the Adani Group’s Carmichael mine project. It had granted at least two crucial approvals to the project just before the election was called.

Over 50 opinion polls had suggested that the anti-coal Labour Party was set to come to power, but the Liberal-National coalition managed to retain power with a narrow majority, which it gained due to a surge of support in Queensland, especially in mining communities where employment remains a concern.

When will mining start?

After its election defeat, the Labour government in Queensland approved the Adani Group’s groundwater management plan. This has paved the way for the company to start work on the mine site. However, work is likely to be restricted to fencing, road upgrades, water management and civil earthworks as the company will still need a few more approvals from the federal government before it can start extraction of coal.

Additional approvals required before mining include the reassessment of the Adani Group’s water infrastructure plan that involves the construction of a 100 km pipeline. Moreover, other aspects, such as the details of the construction of the rail link to carry coal and royalties agreement are yet to be finalised.

According to experts, actual mining may still be three to four years away as the company will need time to develop the required infrastructure.

Meanwhile, the protesters too will be planning their next big move.