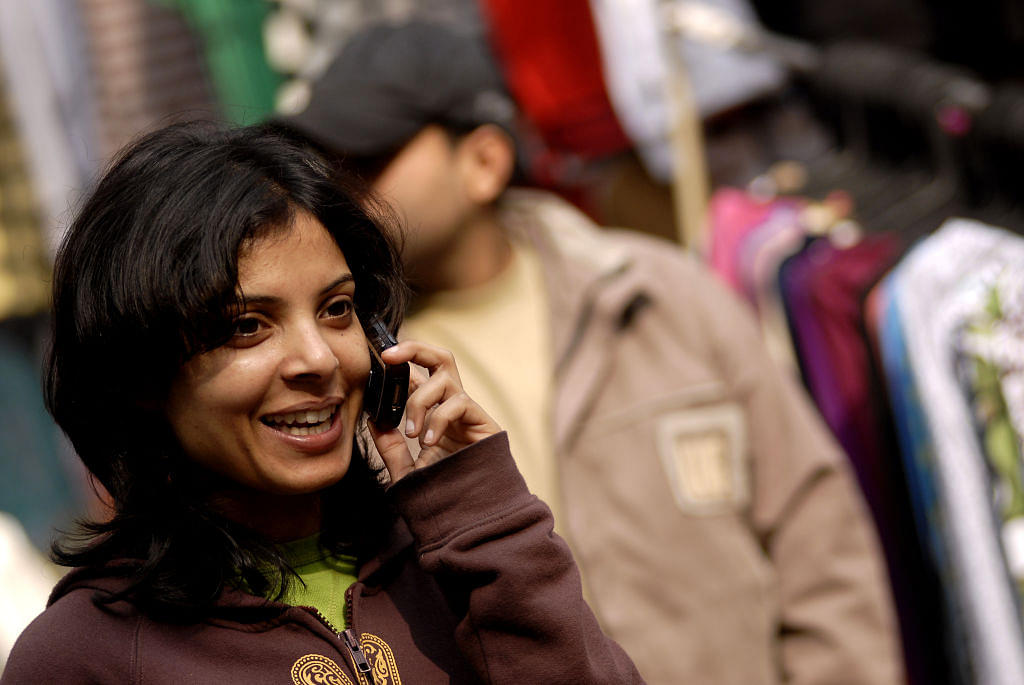 A woman talking on her mobile phone at Chandani Chowk market in New Delhi. (Pradeep Gaur/Mint via Getty images)

It is a good sign for consumers when businesses argue about the right to cut tariffs. This has begun to happen in telecom, where the field is now down to four effective players – Airtel, Vodafone-Idea, Jio and the government-owned BSNL-MTNL combine.

The Telecom Regulatory Authority of India (TRAI) recently set the cat among the pigeons when it said that it would penalise any telecom company with more than 30 per cent market share in any circle for cutting tariffs below average variable cost. TRAI will consider this to be predatory pricing, intended to curtail or knock out competitors.

This order has been criticised by the Cellular Operations Association of India (COAI) as it seems to favour only Reliance’s Jio. The other players may have more than 30 per cent in many circles. Put simply, all operators are now arguing in favour of the right to cut tariffs.

The industry has consolidated dramatically after Jio entered the picture in September 2016. Vodafone and Idea announced a merger, Telenor and Tata Teleservices have exited, leaving their businesses to Airtel, and Aircel has filed for bankruptcy with the National Company Law Tribunal (NCLT).

When an industry consolidates into four main players, the 30 per cent threshold to indicate market dominance makes no sense. In almost every circle, at least one player will be above 30 per cent, and tying its hands when rivals are busy cutting tariffs may be unfair. The TRAI order will probably be modified when telcos appeal to the telecom appellate tribunal.

Of course, the TRAI order does not stop incumbents from matching the price cuts of new entrants, but one wonders why the order was even necessary. If market leaders or aggressive market share builders are going to cut tariffs, it is good for business growth and consumers.

The Rule of Three, enunciated by Jagdish Sheth and Rajendra Sisodia, says that in any mature market, there can be only three generalist players occupying all market segments. The rest will have to be niche players.

Indian telecom is reaching that stage where three private players will now be fighting for market share, with total wireless subscriptions touching 1.17 billion users in December 2017 against a population of 1.3 billion. This means future growth may be a zero-sum game in terms of snaring new users: one player can grow only at the expense of the others. The chances are it is the public sector fourth player who may get cannibalised first.

The other way to grow will be to raise average revenues per user (APRUs), and right now Jio seems to get better ARPUs than Airtel and Vodafone or Idea, since it is driven by data rather than voice. Voice revenues are crashing for all players. In the quarter ended in December, Jio had overtaken Idea in terms of total revenues at Rs 6,880 crore (versus Idea’s Rs 6,680 crore). It is already No 3 in terms of revenue market share, behind Airtel (Rs 10,750 crore) and Vodafone (Rs 8,210 crore). It will remain No 3 once Vodafone and Idea merge.

For consumers, this is going to be good news, since Jio has already stated that it is looking for a 50 per cent revenue market share by 2021, which means it will first keep tariffs low to attract new users – and its competitors will seek to match its prices.

Since all the three players – Airtel, Vodafone-Idea and Jio – will be seeking to retain their current pecking order, one can presume that tariff wars will continue for some time.

TRAI should lay off and let consumers have some fun when the battle for market share hots up. The problem is for government, whose BSNL will now face the heat – leaving taxpayers to pick up the tab for any future losses due to participation in tariff wars.