Piketty Stands On Rickety Foundations In India: Soak-The-Rich Is Not The Answer 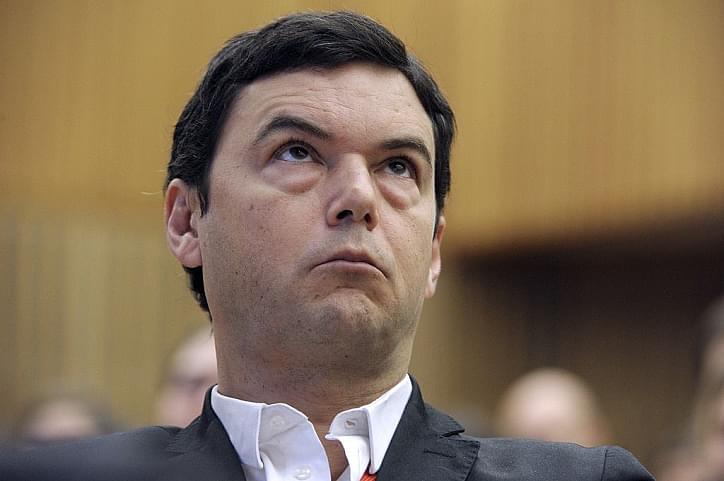 Thomas Piketty’s thesis stands on rickety legs in India. Put simply,he doesn’t know what he is talking about when it comes to India.

India’s Left-infested ecosystem will surely treat Thomas Piketty’s soak-the-rich rhetoric with huge applause. Even though Piketty is an acknowledged expert on income inequality, especially inequality as measured by taxation data, his rock-star status as the 21st Century Karl Marx should actually be confined to the west, of which he knows a great deal. On India, his knowledge is seriously flawed, and any conclusion based on weak knowledge or data is likely to lead to miserable results.

Let’s be clear: Piketty became a rockstar not necessarily because of his best-selling work, Capital In The 21st Century, but because, in the post-2008 world, there is genuine concern that the engines of capitalism are not firing well enough to promote growth and incomes for large numbers of people in the west. If there is enough growth and income to go around, concerns about inequality start fading.

So the real issue is not whether the rich are taxed more or less, but why growth isn’t happening even seven years after Lehman went belly-up and triggered a global financial crisis. It cannot be as simple a solution as the rich paying more tax, though that may be important, too.

To be sure, no one can argue with Piketty’s generic statements on curbing income inequality or that the rich must pay more taxes than the not-so-rich, or that India needs better tax data; but his sweeping statements on India are clearly the result of misinformation.

In a three-way discussion on NDTV, he made the following points: that India needs to curb rising inequality, that India must spend more on education and health, the Indian elite must be forced to contribute more and inequality is rising precisely because they refuse to do this; and, most importantly, India must raise its tax-GDP ratio from the current 10 percent to 20 percent.

It took very little for Bibek Debroy, member of Niti Aayog, who was also on the show along with Chief Economic Advisor Arvind Subramanian, to puncture most of Piketty’s generalisations. Among other things, Debroy pointed out that in the Indian context, the real tax-GDP ratio is 18 percent, since states have the major share in taxes raised.

Debroy also said that the main reason for inequality is often the lack of public services in over one lakh villages. Also, it is one thing to say that more must be spent on health and education, quite another that the state must do all this spending. Trying to get the state into everything is likely to result in more inequality, not less – as has been the experience so far.

Debroy also pointed out that the state spends 14 percent of GDP on subsidies, but most of it is misdirected, going substantially to the middle class. So it is not about raising more taxes, but making sure that what is spent goes to the most deserving.

In an article in The Indian Express, Surjit Bhalla, a senior India analyst at the Observatory Group, points out that Piketty’s statements on rising inequality in India are possibly little more than speculation. In particular, he takes on Piketty’s claim that “India has one of the worst inequalities in income and wealth globally.” In the absence of credible income data, this assertion is foolhardy. Bhalla suggests that the second best option is to estimate inequality from consumption inequality data. He writes:

The statistical rule of thumb is to add six Gini (a measure of inequality) points to consumption inequality. This would place Indian inequality at around 42; that is, squarely at the world mean (and median) of household inequality. A movement of India from the worst percentile to the 50th percentile, if correct, is a very large speculative error.

Put simply, both Bhalla and Debroy are politely saying that Piketty doesn’t know what he is talking about when it comes to India.

I would add several other points to the Piketty-is-wrong chorus.

First, it is wrong to target any specific tax-GDP ratio. The tax-DGP ratio is the result of economic growth and better compliance, not a goal in itself. Moreover, the purpose of government and the state is not to collect taxes, but to ensure that important public goods are created.

This, as Debroy also points out, does not mean that the state must do a job that can be done better by somebody else. States must become enablers, and not necessarily doers. Beyond basic public goods like defence, policing, enforcement of contracts and macroeconomic and monetary management, the state has to play the role of enabler and not necessarily that of direct provider of goods or services.

Second, India’s real tax collection problem is that too few people are taxed, not that too many of the tax-paying rich are paying less tax. Almost the entire rural sector pays no tax, and so does the self-employed sector of professionals (doctors, lawyers, accountants, etc). We need a mechanism to ensure greater compliance from these groups, and also the bigger farmers. But no political party wants to touch farmers, even the super-rich ones. Farmers are India’s holy cow.

Third, given high levels of corruption in both daily life and episodic corruption resulting from crony socialist policies (2G, Coalgate, Commonwealth Games, etc), the actual level of taxes paid is higher than what government collects. The bribe economy is nothing but a system of private tax collection from citizens and businesses.Even the Maoists collect money from businesses to let them run unhindered.

So India’s real tax-GDP ratio is much higher than what Piketty suggests. But shifting this tax from private hands to the exchequer needs higher investments in policing, sprucing up the criminal justice system, and transparency in public tendering and procurement systems.If this is done, automatically the tax-GDP ratio will show buoyancy. In India, the level of tax evasion is huge – and that lies at the core of our problem of inadequate resources for things the state must do.

Fourth, the leakages from the subsidy system are mind-boggling. Roughly 40 percent of subsidised grain distributed to the poor is probably misdirected or siphoned off for private profit. As has been pointed out, it takes Rs 3.65 to deliver Re 1 worth of food to the poor. So the real problem with inequality is the socialist infrastructure of corruption created over the last 69 years, and not lack of tax resources.

The JAM trinity – Jan Dhan, Aadhaar enablement for identification and Mobile payments – could be the biggest game-changer on this front, as it can reduce wastage in directing resources to the really poor. This does not need higher taxation at all, just political will – as has been made clear by the replacement of LPG subsidies with direct benefits transfers.

Fifth, India’s experience since 1991 has been that lower taxes have improved tax compliance, and boosted growth. This has helped reduce poverty faster than at any time since independence. So Piketty’s suggestion flies in the face of visible results on growth and poverty reduction, though it is possible that faster growth also expands inequalities, given that different groups have different abilities to benefit from growth.

These can’t be monetised that easily. The reason is simple: in India, unlike the west, most promoters are the effective CEOs. There is very little separation of ownership from management in family-managed companies. When your right to run a company depends on share ownership, you can hardly sell your assets.Your billions are just a statistical delight. You can’t encash them. At best you can pledge them, which means you can’t be called the real owner of the shares.

According to this Business Standard report, promoters of 517 listed companies have pledged nearly 47 percent of the shares they own to raise money from banks. This reveals the high price promoters pay in terms of the wealth they forgo in order to retain control of their companies. Our billionaires will become real billionaires once they get out of management, which means the share they own can be sold and monetised.

Also, we are reporting too few farm multi-millionaires. Thanks to high stamp duties and benami ownership, and thanks also to the lack for a proper land market, most of our farmers are sitting on crores of land assets that they can monetise only in the black market. If proper land values are reported and taxes realised on them, we would have more farm millionaires and a more vibrant land market. We would have no reason for a Land Acquisition Act.

On the other hand, some of Piketty’s real good suggestions will be ignored by our jholawallas – that is giving reservations based on incomes rather than just caste. Another suggestion is about taxing inheritance more and incomes less. This may not generate too much additional tax income, but would help with inter-generational equity and speed up the separation of ownership from management.

This is a good suggestion as it will force real wealth creators to hand over less of their wealth to their undeserving progeny, and create a level field for non-inheritors. But this flies in the face of Piketty’s basic suggestion of collecting more from the rich in income tax. You can’t tax the incomes of the rich more and yet collect a big booty from inheritance tax. You have to choose one or the other.

The problem with Piketty’s observations on India is that he is largely uninformed about the real issues here. The real challenge is to bring more people into the tax net and collect what is due from them, not raising taxes.

Also read – Piketty’s Solution Will Only Worsen The Problem.