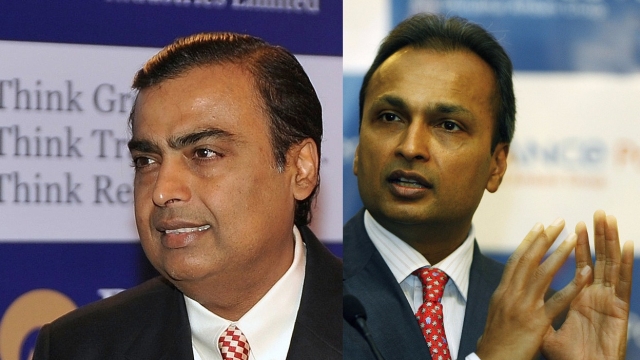 Will the first major casualty in the telecom war unleashed by Mukesh Ambani’s Reliance Jio be his brother’s Reliance Communications (RCom)?

It is too early to say, but the signs are ominous that Anil Ambani’s flagship is floundering on the shores of high debt and a declining customer base.

Over the last few days, RCom shares have headed straight south, quoting at just around Rs 21 around mid-morning on Tuesday, 30 May. This makes RCom one of the biggest stock market wealth destroyers over the last decade, with a 97 per cent drop in price since its January 2008 intra-day peak of over Rs 821.

Debt is killing the company, and a Mint story says that RCom had debts of Rs 47,332 crore as of end of March, with debtors beginning to worry about the possibility of a default. In the fourth quarter of 2016-17, RCom reported a massive Rs 966 crore loss, which came on top of the Rs 531 crore loss in the quarter before. Both losses had a lot to do with the entry of Jio in September 2016 with its initial free offers that lasted till March 2017. All operators have been bleeding due to Jio, and RCom more so.

Last month, the Reserve Bank of India had itself flagged telecom debt as banks’ next major worry, and RCom is close to proving that true since its ability to repay depends on selling assets and a recovery in tariffs. There is no guarantee of the latter, since Jio is committed to raising its market shares for the next couple of years, and this can happen only with low data and other tariffs.

In an investor call, RCom stoutly denied it was heading into any default, and BusinessLine quotes Gurdeep Singh, Co-CEO of the company, as saying that once the Aircel merger is done and RCom sells its tower business to Brookfield, its debt will stand reduced by Rs 25,000 crore. This might happen by 30 September, but the big question is whether the company can sustain itself for another two quarters without another lifeline from the bankers.

Meanwhile, the cash crunch and huge losses of the last two quarters have ensured a steady fall in customer retentions. In March, according to data put out by the Telecom Regulatory Authority of India, RCom lost 2.77 million customers, while Sistema (which has merged with it) and Aircel have lost nearly another half a million customers. This means the impending merger is seeing a steady drop in the combined entity’s customer base due to perceptions about lack of sustainability of operations.

Jio has already driven Vodafone into a merger with Idea Cellular, and Telenor has sold out to Airtel. However, they are still investing to grow customers despite suffering from the Jio blow.

Airtel, Vodafone, Idea and government-owned BSNL have seen customer additions of more than two million during March, while Jio has added over 58 million during the month. April figures, when Jio moved to charge its customers, will give us a clearer picture. Apart from RCom , Jio has also impacted Tata Tele, which lost 2.23 million customers in March.

But while the Tatas can depend on a large conglomerate to bail the flailing telecom venture, RCom has no such comfort factor. Jio’s entry has made RCom slip badly, and the entire company can be purchased for around Rs 5,200 crore at current market prices.

What this effectively means is that RCom will not be easy to sustain as an independent entity as long as Jio continues to bleed the industry, merger or no merger with Aircel. Even in terms of brand recognition, two Reliance brands in telecom are unthinkable.