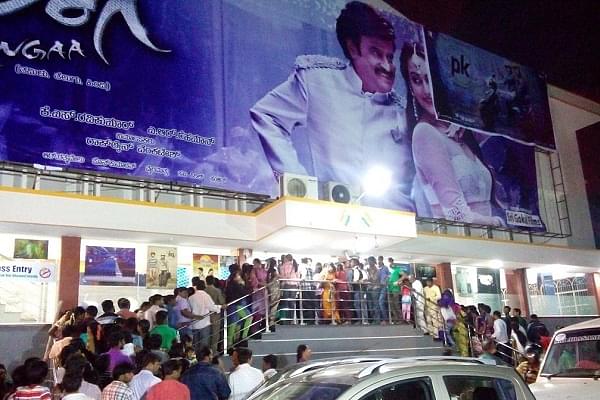 Crowds at a single-screen theatre in Bengaluru.

Single-screen theatres were already struggling before Covid-19 struck. Multiplexes, with their great locations, superior technology, and modern amenities were preferred over single-screens by the audiences. Single- screens had to sell tickets at much lower prices to compete with multiplexes, but the occupancies continued to be low.

Covid-19 appears to be the proverbial last nail in the coffin for such cinemas.

In a bid to survive, several single-screen theatre owners are converting their cinemas into warehouses or repurposing the buildings. However, using a theatre for different purposes is no easy task.

A law in Maharashtra bars using the plots meant for cinemas for any other purposes. Today, when cinema owners are struggling to pay staff, taxes and other bills, these archaic laws impede economic recovery for the single-screen industry.

In smaller towns, these theatres end up being used as warehouses for e-commerce companies. Another hurdle in the process of repurposing the cinema halls is the unique architecture of the hall. The very designs of the halls make it difficult for them to be used for other purposes.

The rise of OTT content platforms before and during the pandemic is another pain point for all cinema companies including multiplexes. Many movies were released through OTT platforms, but not through the traditional cinema route during the pandemic.

Multiplexes have locked horns with film producers over OTT launches coinciding with theatrical launches — a move that encourages people to stay at home and watch movies without spending money on tickets.

The Karnataka government waived the yearly property tax for single screen theaters to support the businesses. The Karnataka single-screen business has been severely hit because of an impasse between distributors and cinema owners over revenue sharing.

Therefore, exhibitors were reluctant to supply films to these cinemas. Almost no new releases along with the reduction in seating capacities to 50 per cent had a detrimental effect on single-screen theaters.

Similarly, the Gujarat government went a step ahead and waived the yearly taxes for single-screens, multiplexes, restaurants, gymnasiums and hotels, reinforcing its image as a business-friendly state.

These moves not only increased the probability of survival for the businesses and jobs, but also created a business friendly perception among potential investors.

On the other hand, Maharashtra, which has a large number of single- screen theatres and multiplexes, has refused to extend any aid to any of these businesses.

As mentioned earlier, single-screen cinemas in Maharashtra cannot be repurposed for other uses. Several iconic cinemas have already shut down. For instance, the Central Plaza cinema in Mumbai had shut down during the pandemic and now, the owners have decided to not reopen it.

The owners cannot demolish the building and use it for other purposes as the law forbids them from doing so.

The Karnataka and Gujarat governments are true exemplars of how governments can help businesses which were severely affected by the pandemic recover.

These moves can help the sectors recover and retain employees, while showing the government in a positive light for the investor community. Either way, it is unlikely that single-screen cinemas and smaller hospitality establishments would be able to sustain businesses and pay taxes on time if the current scenario continues through the year.

The governments might as well waive the taxes and create a business friendly image for themselves — a win-win for all stakeholders.