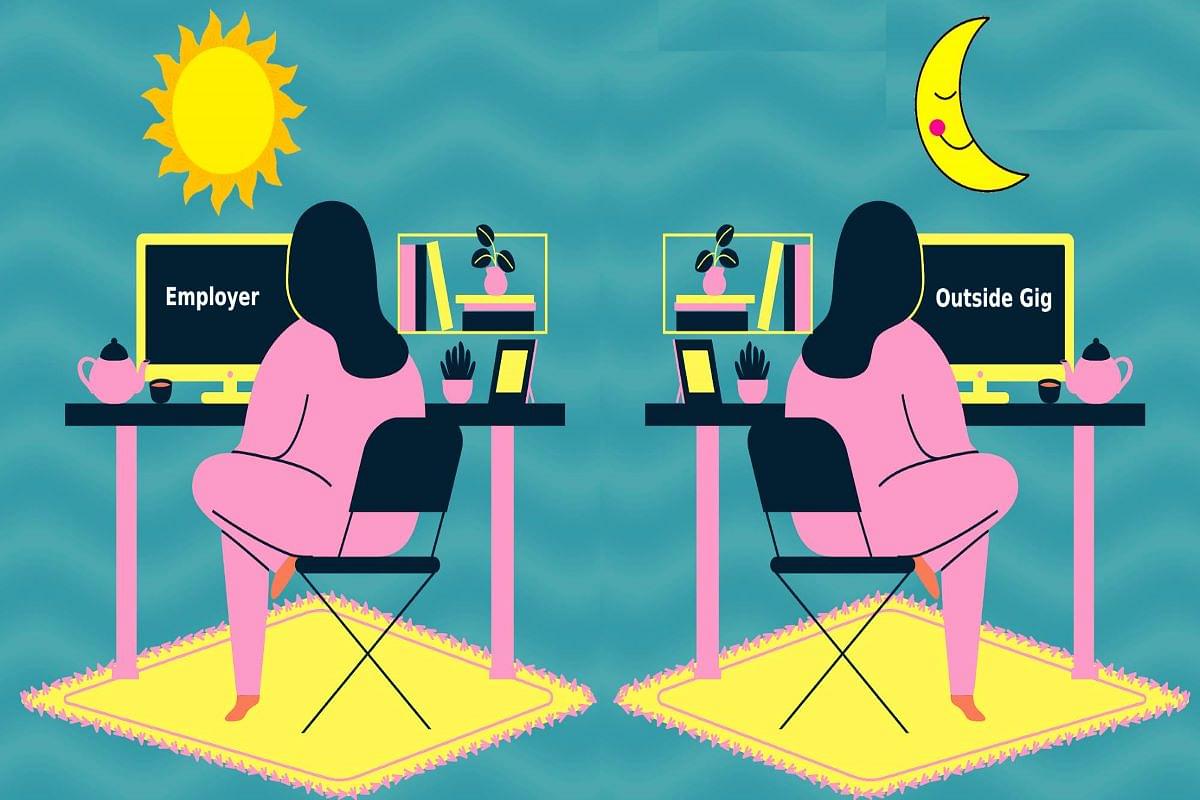 A gig by the side? (Pixabay)

One of the great principles in the art of conflict —and of diplomacy—is to know when to give way. An orderly retreat to regroup, as any military commander —or aspiring negotiator— knows, is way better than a messy withdrawal, at a time when your opponent has wrested the initiative.

Many schools of management are known to mandate a study of Chanakya’s Arthashastra, the world’s first treatise on diplomatic practice and statecraft, as well as The Art of War by the Chinese military strategist, Sun Tzu, both, coincidentally dating back to the 3 century BCE.

Clearly, the executives at the helm of some of India’s bellwether technology companies, skipped those classes, when they did their MBA. (Cheeky thought, maybe they were moonlighting?)

Subtlety in approaching sensitive matters of employee relations seems to have escaped them when they conjured up outrage and anger at the fact that some of their employees had taken on a second job during the long COVID lockdown months and continued to do so now.

Their publicity apparatus disseminated their macho quotes full—as Shakespeare’s Macbeth put it —of “sound and fury, signifying nothing” except possibly pique. We were told how many hundreds they sacked for doing (illegal) double duty.

Will it work? This is an instance of bringing a sledgehammer to a fight that calls for a stiletto (a favourite weapon reportedly of the mafiosi because the victims didn’t even sense that they had been punctured).

No one in his or her right senses has suggested that an employee with one company should be working on the sly for a direct competitor, or should even use the knowledge and resources provided by the primary employer to get money from another employer.

These are clear cut violations both legally and ethically and will rightly attract legal recourse.

But as IT majors are learning, there are many aspects to what the media with its penchant for shorthand bundles under the term ‘moonlighting’.

Information and Technology Minister of State Rajeev Chandrasekhar put it as subtly as he could when he said a few weeks ago: “Today’s youngster has every sense of confidence and purpose about monetizing and creating more value to his or her own skills. So, companies that want to pin their employees down and say you should not work on your own startup are doomed to fail.”

He added: “Employers expect employees to be entrepreneurial while serving them. The same people can apply it personally to themselves. Time will come where there will be a community of product builders who will divide their time on multiple projects. Just like lawyers or consultants do. This is the future."

No, he was not condoning violation of non-compete or non-disclosure contracts – but remember, the man has been an entrepreneur employing hundreds and before that has generated valuable intellectual properties for a global IT player.

What he advised was a splash of cold realism in an environment of very highly skilled professionals who are constantly aspirational and seeking recognition (monetary and otherwise) for their perceived skills.

Change Of Tone At Infosys

And this week it seems to have sunk in – for one big tech player at least:

An internal communication sent to employees by Infosys management, which came to light yesterday, accepted the principle that staff could take up a second or ‘gig’ work as long as there was no conflict with the primary job.

“Any employee, who wishes to take up gig work, may do so, with the prior consent of their manager and BP-HR (business partner - human resources), and in their personal time, for establishments that do not compete with Infosys or Infosys' clients.”

The mail also struck a conciliatory note by displaying trust in employees: “We count on our employees to ensure that this does not impact their ability to work with Infosys effectively. In addition, as per Infosys employment contract, employees may not work in areas when there is a potential conflict of interest or by accepting dual employment.”

This is as fair as fair can be.

Coming three months back when moonlighting became a bad word, it might even have been pioneering and might have calmed the waters for other Indian tech majors.

Instead, even five weeks ago, Infosys had sent a stern internal missive titled “No Double Lives”, warning of dire consequences including “termination of employment”, if any one indulged in ‘dual employment.’

Infosys is not the first to take a revised, more nuanced and pragmatic view of moonlighting. In a blog in August, food and grocery delivery leader Swiggy encouraged its staff to take up gig work, especially if they could serve socially relevant causes by doing so.

TCS too has been measured in the way it addressed the issue. It's chief operating officer N Ganapathy told PTI two days ago, that while not condoning the practice, it was important to show empathy while dealing with cases involving moonlighting as it could ruin careers.

Ultimately the market determines the dynamics of the workplace:  A study just released by US-headquartered skilling company Skillsoft—IT Skills and Salary Report—says the skills shortage in the IT industry is growing  from bad to worse.

Two-thirds of IT decision makers have skill gaps in their teams in 2022 and have been unable to fill at least three positions. And more than half (53 per cent) of professionals surveyed say they will look for a job within the next 12 months.

The message: Employee recruitment and retention are going to be the biggest problems.

In an opinion piece last month, Swarajya’s editorial director R. Jagannathan suggested: Moonlighting Is Here To Stay: Big Tech Must Read The Writing On The Wall.

And in an earlier report, this correspondent warned. Moonlighting: Doing Double Duty Could Be A Case Of Profit With Peril.

But with the sober lead taken by Infosys and TCS, chances are the issue of moonlighting in India will soon fade away as tech professionals are gently nudged into a realization of their legal and moral obligations to their primary provider even as they can guiltlessly use their talents to pursue some private passion.