With A Clean Chit, Infosys Seeks To Put Panaya Acquisition Row To Rest 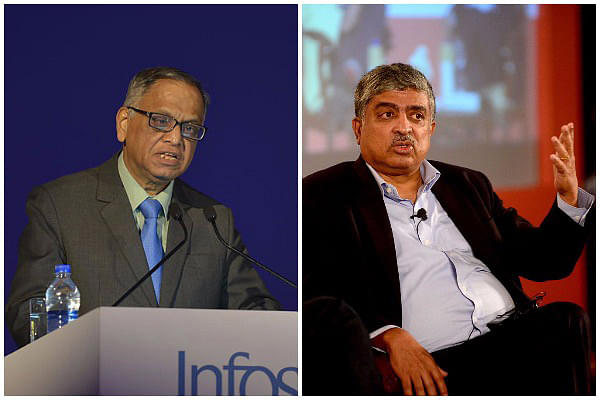 The decision by Infosys to give a clean chit to the contentious Panaya acquisition and dismiss allegations of poor corporate governance is being seen as a move to shield itself from any potential legal blowback.

Corporate governance experts, investors and proxy advisory firms are concerned the move may limit Infosys’s ability to attract external candidates to the role of chief executive officer, which fell vacant when Vishal Sikka quit in August.

On Wednesday, questions mounted on Infosys’s recent decision to overhaul its board and oust chairman R Seshasayee, since co-founder and chairman Nandan Nilekani declared on Tuesday that Infosys had found no evidence of wrongdoing in the $200 million acquisition of Panaya, an Israeli automation technology firm, in a subsequent investigation of the purchase. The clean-chit immediately drew a sharp rebuke from founder N R Narayana Murthy, who has in the past accused the previous board and Seshasayee of corporate governance breaches.

Hearteningly for investors, Murthy’s riposte expressing disappointment at the board’s decision does not mean that the two co-founders are at odds, as is being widely portrayed in the media, according to at least three executives familiar with the latest development who spoke on condition of anonymity.

“I don’t buy that this is a Murthy versus Nandan issue,” said Amit Tandon, founder and managing director at Institutional Investor Advisory Services (IiAS), a proxy advisory firm. “Our sense is that the company recognises that it is time to put the past behind and move on and focus on business.”

Although Nilekani’s latest statement could help Infosys put an end to the controversies of the past 18 months and help the company focus on business, the latest developments raise two important issues.

Firstly, experts are questioning the rationale for the exits of Sikka and Seshasayee, and the overhaul of the board, if there had indeed been no wrongdoing. Secondly, this episode could potentially deter external candidates from taking up the job of CEO at Infosys.

“So why did Nilekani return to the company and why did Sikka have to leave and the board to be reconstituted? The founders’ reputation will certainly take a beating and it is sad to see no clear answers,” said an executive who has worked with both Murthy and Nilekani.

“A bigger risk now is the message it sends to an external CEO candidate who may have been considering joining Infosys. The founders, who hold less than 13 per cent stake, can hound any CEO without being accountable to anyone,” said a Mumbai-based analyst at a foreign brokerage on condition of anonymity.

Experts pointed out that the latest development basically vindicated the actions of the previous management and that the hue and cry caused by the founders over the Panaya acquisition and other issues had no good rationale to start with. On the flip side, even if there was merit in the allegations levelled against the previous board and management, experts said it reaffirmed concerns that only one set of shareholders is privy to more information related to the company than others.

However, while investors have been left none the wiser about the details of the Panaya investigation, some executives pointed out that Nilekani’s intention to steer Infosys to a stalemate was probably the best and only option.

“Infosys is listed on multiple stock exchanges and the company would have potentially been fighting class action lawsuits or risked faced investigations if the management did really make any disclosures of any wrongdoing, if indeed it unearthed (wrongdoing),” said a second executive, who did not want to be named.

“This was the best and most workable decision because either way you are damned. You are in trouble and the brand takes a hit if you disclose. If you do not disclose, then the founders’ credibility is questioned,” this executive added.

“The new chairman has reiterated what the earlier board was saying. Based on interactions with investors, this actually comes as a reassurance for a certain set of investors who until now may have thought otherwise,” said Tandon of IiAS. “Our sense is that investors always want to draw a line on what has happened and move on.”

Still, many believe there is merit in Murthy’s claims of poor corporate governance because Infosys has acted against all executives linked to the controversies of the past year.

Infosys still has not disclosed the reasons for halting those payouts, but those actions were taken after the founders expressed their unhappiness. Bansal and Infosys are now fighting before an arbitration court over the remaining Rs 12 crore of outstanding payments.

Secondly, after Murthy’s claim of wrongdoing in the Panaya deal, most executives of Infosys’s merger and acquisition team have left the company. Infosys claims none of the executive departures are linked to any probe or that their departures are an admission to any sort of wrongdoing.

Finally, Infosys named independent director D Sundaram as new chairperson of the audit committee, replacing Roopa Kudva. Executives question why the company appointed a new head of audit committee if there had been no wrongdoing.

Infosys on Tuesday did not outline why it appointed a new audit committee head. An emailed questionnaire sent to Murthy on Wednesday went unanswered. Infosys also did not respond to requests for comment.