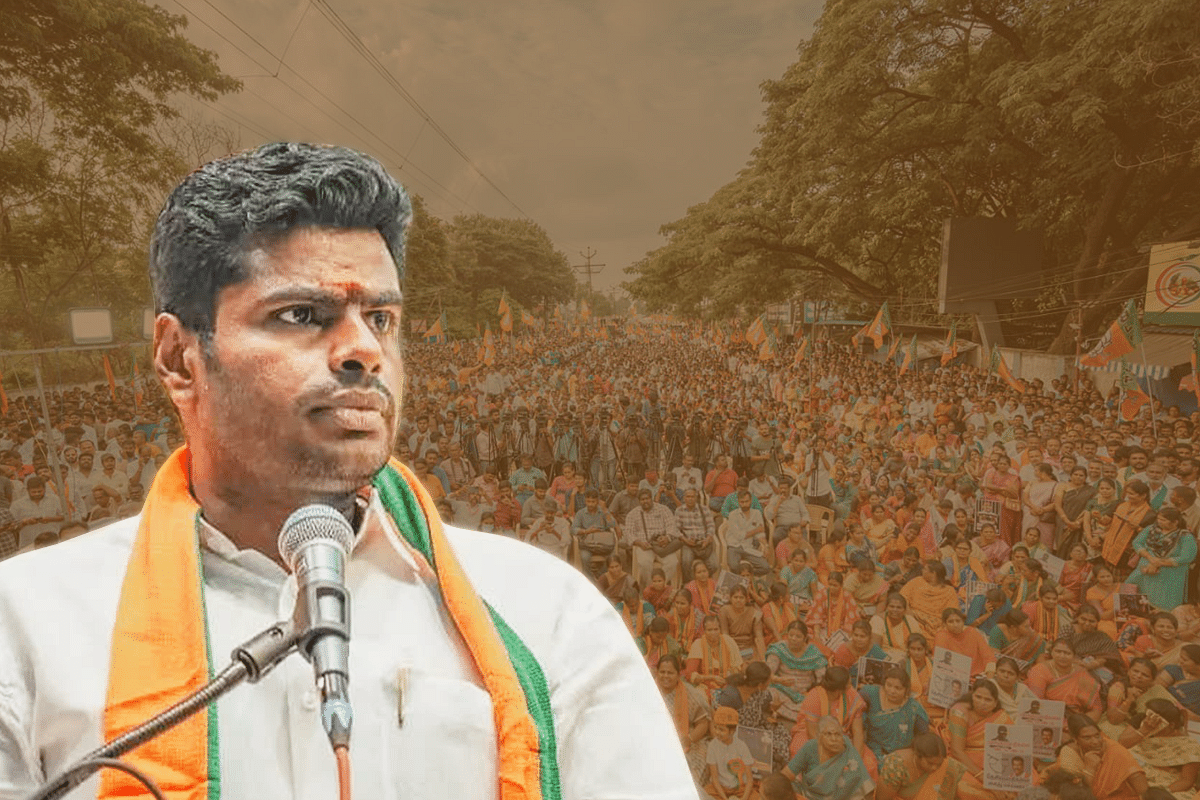 BJP state party president in Tamil Nadu and former IPS officer Annamalai is a man on a mission mode. Ever since he took charge of the state unit of Tamil Nadu BJP, he has managed to hog the headlines and catapult the party to the centre stage of political discourse in the state.

Whether the party under Annamalai's leadership has gained electoral traction remains to be seen. While the 2024 Lok Sabha polls will provide early signals if BJP has achieved the momentum to be electorally impactful, the real litmus test will be the state assembly election scheduled in 2026. But it is increasingly evident in the last few months that BJP has indisputably emerged as the second ideological pole in the Tamil political landscape, challenging the dominant Dravidian narrative.

The sign of the shift is visible through the enthusiastic crowds that the young leader is attracting as he crisscrosses the state for various party programmes and protests he has launched. His media interactions, often combative, have gained phenomenal coverage, some argue even disproportionate to the party's current relevance.

In a recent YouTube interview, a leading journalist and political observer sympathetic to the ruling DMK bemoaned that while Annamalai is getting coverage on page one in newspapers, the events featuring the state chief minister are relegated to page 4.

Annamalai's ability to attract crowds, build a coherent narrative and garner significant media space since his takeover of the state unit has undoubtedly rattled the present regime, though they don't acknowledge it openly.

A Section Of Tamil Media Vs Annamalai

Given that a significant section of media in the state fashion themselves as ideological foot-soldiers of the Dravidian movement and, worse, subservient to the present ruling DMK government, they have taken it upon themselves to play agent provocateurs in a bid to derail and defame Annamalai.

Almost every other day, we witness the spectacle of many journalists, often indistinguishable from DMK functionaries, making a beeline to a dime a dozen TV and YouTube channels to give interviews in which they peddle conspiracy theories like Annamalai is on the way out and the national leadership is unhappy with him.

Speculations are rife that most of these YouTube channels, which constantly churn out falsehoods, and anti-Modi narratives, are funded by ideological and religious forces that stand to benefit, tangibly and intangibly, from the ruling DMK.

While the Dravidian movement vanguard and propagandists pose themselves as champions of 'social justice', they see no irony in invoking Annamalai's modest background from an agro-farming family in a derogatory manner. It may be tough to believe, but several senior journalists of Tamil media actively participate in mainstreaming abuses hurled against Annamalai.

With the blessings and support of the ruling DMK, a section of journalists and political observers appear to be openly carrying out an agenda to undermine Annamalai's growing stature in the state polity.

While the DMK and its famed social media team rubbish and even constantly mock Annamalai, the Dravidianist party is rattled by the rise of the young former IPS officer.

Trouble For Annamalai From Within The Party?

The virulent opposition from the deeply entrenched Dravidian ecosystem is only part of Annamalai's challenge.

Right from the time he took over, Annamalai has faced a slew of internal challenges, with attempts to cast the party in a very bad light, especially on its treatment of women.

Just days after Annamalai took over a s the president, a sleazy private video of K T Raghavan, a senior office bearer of the party, surfaced in social media and was outed by a Madhan Ravichandran, a YouTuber, who was also a part of the state unit then.

Madhan also sparked further controversy by claiming that he possessed a handful of such videos which involved office bearers of the state BJP unit.

In the aftermath of the scandal, which brought in enough bad press for the party, Annamalai acted quickly and suspended both K T Raghavan and Madhan from the party's membership.

A whisper campaign was launched (and duly amplified by Tamil media), insinuating that Annamalai is targeting prominent Brahmin leaders of the party. Ridiculous as it may sound, the campaign keeps resurfacing periodically.

"Since DMK's return to power, it has ratcheted up its usual hate-filled anti-Brahmin rhetoric. So it is likely that a section of Brahmins is feeling under siege. A section of the old party guard from the community (which ironically is cosy with DMK) may be using this to their advantage to paint our leader and party as against them," a senior functionary from Chennai said.

Recently, another internal strife in the Tamil Nadu BJP erupted after some office bearers indulged in mudslinging on social media.

Gayathri Raghuram, a little-known actress and party functionary, sly-tweeted, expressing displeasure at not being invited to Varanasi's "Kasi Tamil Sangamam". She alleged that the new leadership has rendered the 'old guard' redundant. The state leadership did not take kindly to her open expression of dissent lightly and has since suspended her from the party.

Following her suspension from the party, the local media and DMK propaganda army began the "Annamalai vs Brahmins in BJP" chorus.

In yet another embarrassment to the party, a clip of an audio conversation between Suriya Siva (a son of an influential DMK leader and veteran parliamentarian Tiruchi Siva), and Dr Daisy, both office bearers of the party, was leaked. In the clip, Siva is heard unleashing a barrage of obscenities at Daisy. The leaked audio led to a huge media backlash. Both have since been suspended from the party.

Since Annamalai has taken over, there have also been speculations that a section of the party's 'old guard' is running a whisper campaign to undermine him.

"Annamalai is acutely aware of the vested interests within the party. Few top leaders enjoy proximity with the ruling DMK. A quid-pro-quo certainly exists to safeguard their business interests across the state. Annamalai is determined to break any such nexus to emerge as a credible alternative", says a senior RSS functionary.

"A handful of these 'old guard' often indulge in praises of the former Chief Minister M Karunanidhi and the present DMK leader and CM M K Stalin. While some of it may be an act of political courtesy, it is also an attempt to embarrass Annamalai." said another party leader.

During the recent visit to Gandhigram to attend a university convocation ceremony, Prime Minister Narendra Modi is said to have spent an hour with Annamalai (en route to the Madurai airport) to get a briefing on the political developments in the state. This also led to angst among the 'old guard's' section over the proximity the state leader enjoys with PM Modi.

The general feeling among the majority of party cadres is that if the 'old guard' of the party is conspiring to bring down Annamalai, it would be complete naïveté on their part if they think that the national leadership of the party will tolerate this.

"Leaders in Delhi have always taken cognisance of the fact that Tamil Nadu is one of the very few states where the erstwhile local unit not only could not leverage the Modi brand but also did nothing to counter the vile attacks coming from DMK in the past many years." a district unit secretary said.

The Road Ahead For Annamalai

It is common knowledge that Annamalai has been handpicked for the role of state president by B L Santhosh, with the consent of none other than Home Minister Amit Shah and PM Modi.

The party's central leadership is convinced that Tamil Nadu is a crucial ideological battleground state for the party.

The party is broadly confident that the way ahead in Tamil Nadu is by combining a localised Hindutva push, highlighting the 'infrastructure meets welfarism' model of the party, promoting its brand of 'positive' social justice and exposing the 'misdeeds' and 'nepotism' of what appears to be an already listless and distracted DMK government.

Most who have followed Annamalai through his career and well-planned political plunge feel that recent happenings are unlikely to ruffle him.

"Even when he took over as head of the state BJP, he was aware that what he has chosen is running a tough marathon, not a sprint. So, he is fully aware of every possible way his marathon run might be thwarted by the so-called Dravidian ecosystem. But he is not someone who is going to rest, until he sees the last rope in this run", was what a seasoned political observer in Delhi had to say.

There has been no precedent in the state for the kind of leader Annamalai is, political observers say—an unblemished career IPS officer, known for his integrity and chosen by the party to head a state unit where the party has been in doldrums for aeons. They are quick to add that given that Annamalai is making good inroads for the party in TN, one can expect a slew of hit-jobs aimed at the party's second line to bring disrepute to the state leader.

That itself is a loud and clear message. Annamalai, only 38 years old, is here to build the party as long as it takes. And that's a message for those in the opposition camp in Tamil Nadu and many within the BJP.

Freelance writer, and student of politics
Get Swarajya in your inbox everyday. Subscribe here.
Tags: