How Narendra Modi Refreshed His Connection With Women Voters In Punjab 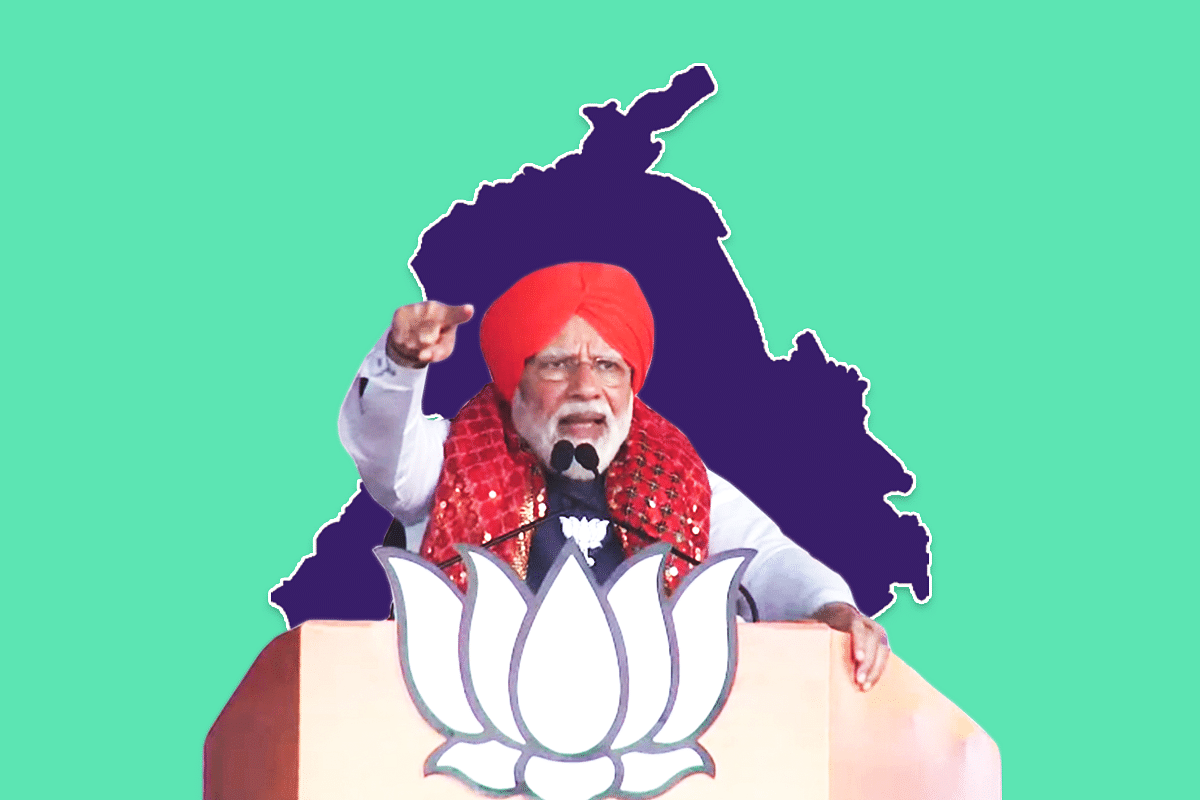 PM Narendra Modi in a rally in Jalandhar

In his election speech in Pathankot, he said that the soil of Majha has given him the love and affection of a mother. He referred to an emotion which is part of the local culture in the region -- expressed in the following words:

In Jalandhar, PM Modi mentioned that he bows to Mata Tripurmalini. He
added that he wanted to visit the Shaktipeeth in Jalandhar, and added
that he could not as he was advised against it owing to security concerns. From expressing his longing for a darshan of the divine feminine in Jalandhar, in Pathankot, he was heard talking about the strength of the feminine. He said that he believes that the girls and women of the region will contribute to the armed forces.

He also mentioned the opening of Sainik schools, an initiative taken by his government.

Known for picking issues important to women, betterment in the lives of women, the role of women in the welfare of the region, women important to local histories, PM Modi and the BJP were seen shaping a fresh narrative centered on women in Punjab. PM Modi's focus on women in election rallies, women-centric programmes, work and policies; and those very women-centric programmes and policies becoming talking points in election rallies are features that the BJP benefits from from election to election.

In Uttarakhand and Uttar Pradesh, PM Modi had continued to build his
connection with the women voters during visits and speeches during 2021. The BJP would be hoping for an advantage and a number edge over its opponents over this one strong factor which has contributed to its victories in 2014 Lok Sabha poll, 2017 (UP and Uttarakhand) assembly election and the 2019 Lok Sabha election.

As was clear in the BJP's rallies in Punjab, it tried to gather support from Hindus and different communities of Punjabis in Doaba and Majha regions for a fresh chapter and a new partnership. Barely three months after repealing the farm laws, PM Modi has gone for a flesh slate in dialogue that many doubt will have immediate benefits but may have positive long term impacts. In New Delhi, PM Modi met prominent members of the Sikh community from across India and those from Afghanistan in New Delhi and in his rallies in Punjab, he mentioned women across important social contexts in Punjab at the BJP's rallies.

These subjects include social menaces that need curbing and eradication, opportunities for women, spirituality, better lives for girls. The feminine is the core of prosperity in the Indic way of life. It goes without saying that the BJP's promise of 'Hasda - Vasda - Nachda - Chadha' Punjab would be meaningless, dry and lacking soul without ensuring a deeper interaction with the women voters.

In his Jalandar speech he mentioned the drug menace. It is one of the
clearest references where he has connected the youth with the mothers
in the state. Modi could have simply mentioned that the drug menace
affects the youth in the state and that's detrimental to their lives and state's progress. He, instead, mentioned "ma" (mother), when talking of the drug menace, making home for a new subject in an old narrative. If the BJP really does something on the problem of drugs, each minute positive change, in all probability, will be dedicated to the mothers in Punjab.

A look at how Modi has connected the betterment and prosperity of
mothers by invoking the need to free the "sons" from the drug menace.

First, he addressed women in a way that he presented his own perspective of women being the owners and shapers of prosperity (an offshoot from his narrative in Uttarakhand, where he attributes prosperity and "home" to the hard work of the women of the hill state).

Next. Modi seemed to rub in the meaning of "assets" and emotional assets.

Next, he called for the need to construct the right (social) environment.

Is it not necessary to have a movement for freedom for drugs to protect every mother, every family, for the fulfilling of dreams you have for your child? For the fulfilling of those dreams, isn't there a need to construct the right (social) environment?

That the issue was addressed with a question mark in the end, indicates how Modi is asserting the need to engage mothers on the issue of drugs by giving them the space to mull over the possibilities -- electoral and hence social in 2022 for beyond 2022.

Modi visited the Sant Ravidas mandir in Delhi on Sant Ravidas Jayanti. The event and gesture speaks to a community directly. Modi carved an opportunity for himself to interact with the women devotees within a
space where the sacred is worshiped. He chose to participate and the
musical instrument he chose to play, the cheemta is of sangat - accompaniment in keertan and satsang.

The voice of the women and his accompaniment: the message filtered out. There, he sat in the midst of women devotees, on a chowki that's used by devotees, and refused a chair which was being brought by a woman elderly devotee.

These are minute specifications Modi chooses to go for when other parties in the election fray are going for bigger hits and misses: one of them -- the condescending reference to people from UP and Bihar made by a party that was wound up in in-fighting. Within 24 hours of this public reference made on the migrants from UP and Bihar, Modi grabbed the chance to make this slip from his opponents an issue in his own election rally. He connected two aspects, spirituality and migration in the context of UP and Punjab.

He first attacked the Congress on the statement made by the Punjab chief minister and then mentioned the journey of Sant Ravidas Ji himself from UP to Punjab.

The issue of migration puts one gender as the face of migration. Women
and their lives are at the core of the migration but they barely get a mention. Modi broke that norm. In the political narrative, he attaches the reference to women when it comes to migration or difficulties undertaken by migrants in adversity, or the impact of outmigration on women as the preservers of homes.

When he was hitting at the Congress on the comment that involved the
migrants of UP and Bihar, his voice was probably reaching parts of Uttar Pradesh, particularly Bundelkhand and Poorvanchal, ahead of polling. Pride in hard work, regional pride and dignity, resonate as an emotion in Uttar Pradesh, especially after Yogi Adityanath raised his action and voice towards providing the people of UP livelihood within the state in the post Covid lockdown scenario.

Modi has tried to make a fresh beginning in Punjab by addressing the women in the state.

...as the soil touches the body, so shall the height (and
stature) grow.

This emotion-smeared symbolic dictum centered on the growing of a
child in the soil of Punjab might apply to Modi and his efforts on the
electoral soil of Punjab. How PM Modi's words work in his connection with women voters, will be seen on 10 March and beyond, till 2024.