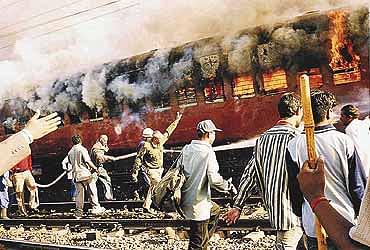 Facts are boring. Truth is not sensational.  Facts become sacrosanct because they are supported by hard evidence and statistics. Fiction on the other hand shares no such burden. Flights of fancy can soar to any heights. If there is a competition as to what is more engaging, fiction wins hands down.  But unfortunately journalism is not fiction and reporting must be based on truth for it to become a credible news report.

Having established that, now let’s talk Gujarat 2002. No let’s not talk Narendra Modi or Teesta Setlavad. Let’s not talk Sanjiv Bhatt or Haren Pandya. Let’s not talk progress or lack of it. Let’s not pitch ‘maut ka saudagar’ vs ‘vikas purush’. Let us instead talk about Gujarat riots lobby that has worked hard in the last decade to keep Gujarat 2002 in headlines.

Undoubtedly, Gujarat 2002 must be the most talked about riots of our times.  This is both good and bad. Good because Gujarat prone to communal clashes has seen the most peaceful decade ever. It seems that Godhra carnage followed by equally gruesome riots really did offend the sensibilities of every one, so much so that I may not be wrong in claiming that Gujarat today, including Hindus and Muslims, just wants to move on.  Bad because Gujarat 2002 has made beneficiaries out of everyone except the most affected people.

Sometimes when things are too complicated to understand it pays to stop, go back in time and try to rework the puzzle all over again. What is the biggest issue that overzealous activists and sensation hungry media has with Gujarat 2002? The answer is not as easy as you think.

Is it to punish the guilty and put the perpetrators behind bars? Well the law is taking its course. Gujarat 2002 has seen most convictions than any other riots in the country. The wheels of justice are moving and it is for everyone to see. Narendra Modi himself has been dragged from lower courts to the Supreme Court, through Special Investigative Teams (SIT) and not to mention relentlessly through the “impartial, independent and guardian of minority rights” Indian media where no one has been able to establish anything against him. Unfortunately the legal process to find the guilty has taken a long time because of appeals and counter appeals. But it is certainly better than most other riots where no court cases have been filed against perpetrators. A glaring example is that of Kashmir. Not one FIR or court case is lodged against terrorists who killed hundreds of Kashmiri Pandits in broad daylight. In fact Yaseen Malik who admitted to killing 4 IAF officers roams free and is invited to seminars and TV debates by the ‘independent and impartial media’. But we digress. Sooner or later the guilty will definitely face the law for their role in the riots. If this is a given, then what is bothering our Gujarat riots lobby?

Is it sheer human loss? Of course 59 passengers of Sabarmati Express and 1044 (Hindus and Muslims both) who were brutally killed after the riots is a huge number of lives to be lost to mindless violence. But if we were to do a dispassionate analysis, we have seen riots which have claimed far greater number of lives. Of course even one innocent life lost is way too many, but if it is just about human loss, many other riots should claim higher or equal space in our media. So it is certainly not human loss.

Is the Gujarat riot lobby then mourning breakdown of administrative machinery? That is the definition of a riot isn’t it? Sure in Gujarat during those fateful days of February and March 2002, the state witnessed complete breakdown of administration. What else can explain such widespread riots?  What happened there was true of any riot. Surely our Gujarat riot lobby is aware of this. So then they should mourn every single riot beginning from the mother of all riots. The India Pakistan partition. It was no less than our own version of holocaust. Surely they don’t talk about any other riot with such passion.

Then what is it that they really want?  They have worked really hard to present the riots as a pogrom. But unfortunately 254 Hindus that died in the riot prevent them from doing so. Pogrom, as everyone knows, is state sponsored. Therefore no Hindus should have been killed. But they were. So facts have betrayed the riot lobby here as well.

If it is none of the above then what is it that Gujarat riot lobby demands? Look carefully at the media coverage of Gujarat in last 10 years, you will get your answer. Lies have been fabricated, false affidavits have been filed, crooks have been made heroes, appeals and counter appeals have been filed in courts and worse, actual victims have been forgotten. Surely the riot lobby knows that the case that has been built on falsehood very rarely will win in the court of law. So what is driving them?  Is it all to bring down the duly elected chief minister of Gujarat, Narendra Modi who had taken over as CM four months before the riots took place? If it is indeed to get rid of him then our anti Narendra Modi Gujarat riots lobby should form a political party and defeat him in the elections. But alas the electorate of Gujarat who were the ones affected by the riots must either be heartless, deaf or extremely intelligent because Narendra Modi has been put back in office in two successive elections after the riots. So obviously the people who suffered from the riots do not see eye to eye or heart to heart with the Gujarat riot lobby. They have ignored the word and plight of the affected and subjected the rest of us, including the people of Gujarat, to the lobby’s interpretation and verdict on these riots.

My assumption is that  Gujarat riots have benefitted some people so much so that now they are not even interested in the truth, because that would mean  a closure and an end to their means of  livelihood.  All they are attempting to do is to paint India as an intolerant country when it comes to treatment of minorities and keep the wounds flowing and fires burning. If they really wanted to defeat Narendra Modi, they would have done so either electorally or by fighting in the court of law through honest means. If truth was on their side surely Narendra Modi would have been defeated in either or both of those battlefields.

Gujarat 2002 riots are a blot on our democracy and our all inclusive secular fabric. A decade later it is time we introspect on how and why we let the unfortunate Gujarat 2002 riots be hijacked by people with their own agendas who have no interest in truth or a desire for justice for the victims.