Modi and the media 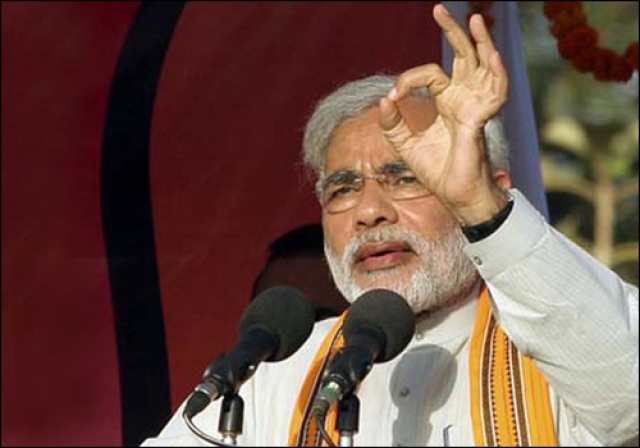 The international media are predictably on an anti-Modi crusade. They blame him for killing more than 700 Muslims in 2002 (not for the death of over 200 Hindus in the same riots, nor for the death of 58 Hindus in the Muslim attack triggering the riots), shortly after his accession to power in Gujarat. They hardly report the fact that he won all his judicial trials and was twice cleared by a Supreme Court investigation. And if they do, they try to overrule these telling facts, by citing anti-Modi “sources” and “Indian observers”. So, they accuse Modi of complicity in mass murder, even in “genocide”.

Modi’s alleged guilt Only high-quality media would try for some perspective, most just lead their readers by the nose towards focusing on this event in isolation. Thus, Congress secularists killed three thousand Sikhs in 1984, and their leader Rajiv Gandhi failed to take the event seriously, let alone taking some responsibility for it. No media outrage followed, neither then nor twelve years later.

In 1971, the Pakistani persecution of the East Bengali Hindus killed at the most conservative estimate hundreds of thousands, yet those Hindus did not become a matter of concern the way Indian Muslims are today. (On the contrary: when Taslima Nasrin’s book Lajja focused on the East Bengali Hindus’ renewed massacre of December 1992, most commentators falsely claimed that she was persecuted for her feminism and kept her siding with the Hindus out of view.) Most media faithfully keep up the pretense that the Gujarat riots are at the centre of South-Asian history.

The international media are mostly ignorant of what exactly goes on in distant and exotic India, or they just parrot their Indian contacts, not wanting to know just how partisan these are. But even someone ignorant of Indian situations should be struck by some anomalous data.

For instance, Modi has been in power for more than twelve years after the massacre. If he had intended to murder Muslims (and “genocide” implies intention, it is not a policy accidentally causing deaths, such as Chairman Mao’s Great Leap Forward), it is strange that he didn’t use any occasion during those twelve years to kill even more Muslims. After all, he had the means to kill a few million of them. Instead, even the Muslim massacre of dozens of Hindus in the Akshardham temple in the Gujarati city of Gandhinagar didn’t provoke retaliation, let alone a government-induced massacre. Many riots and bomb attacks have taken place in other parts of the country, killing a few Muslims and hundreds of Hindus, but Gujarat remained peaceful all through. The media have not remarked just how anomalous this fact is, they have not even reported it.

Predictions of doom They also warn that the BJP’s probable victory constitutes a “threat to India’s secular fabric”. First of all, they assume that India is a secular state, which it is not. Every secular state on earth by definition observes equality before the law for every citizen regardless of religion. India, by contrast, has different family law systems (marriage, inheritance) depending on one’s religion, e.g. Muslim men can immediately impose a divorce while all others have to pass judicial procedure (thus also causing discrimination by gender for Muslim men vs. Muslim women).

Moreover, it has arrogated the right to reform Hindu law, while it passively abides by the other law systems, e.g. it has abolished Hindu polygamy but continues to allow Muslim polygamy. So, it discriminates between religions. It extends those discriminations legally and constitutionally to the fields of education (where minorities are privileged over the Hindus) and places of worship (where politicians plunder Hindu temple funds while respecting those of churches and mosques, sometimes even financing these out of Hindu temple funds). This is quite unsecular, and the only party announcing the abolition of these discriminations, the only party which wants to make India a secular state, is the BJP.

Secondly, the media forget that they have already made these predictions before, viz. when the BJP came to power in 1998. At that time, they prophesied that the BJP would be terrible for “India’s secularism” that it would come down on minorities as well as on low-castes and on women and that it would “throw a hundred million Muslims into the Indian Ocean”.

They were all proven wrong on every single count by reality. If India was a secular state and the BJP was anti-secular, then it had for six years every chance to abolish the secular state and persecute all the groups mentioned. Did it? And why should media who were proven totally wrong in the past, be more accurate in their predictions for 2014?

Finally, since the much-discussed riots, Narendra Modi has concentrated on fighting corruption and on building Gujarat’s infrastructure and economy. While the so-called secularists were trying to refocus on communal conflicts, he was working on purely secular matters, and scoring impressive successes in these. Now, to confirm the impression that Modi is secular while his enemies are fond of communal issues, the anti-Modi media explain why the public should ignore his secular achievements and get worked up about a communal matter that happened twelve years ago.

Blaming the West While it is easy to demonstrate that the international media give a very partisan version of India’s 2014 election campaign, a correct explanation of this phenomenon is much harder to come by. From the Hindu side, I keep reading that “the West” is imposing an anti-Modi view on the poor hapless secularists in India. Hindus who despair of the hostile coverage routinely allege that the West has it in for the Hindus, and that this negative reporting on Modi is part of a vast Western conspiracy. In reality, the West doesn’t normally care for who wins in India. Thus, the unexpected progress and indirect accession to power of the Communist parties in 2004 did not cause a ripple in the media.

Western countries have no direct stake in Indian politics. Not even the Americans, who have invaded several countries and toppled several governments in the last two decades, well after the end of the Cold War, plan to invade India, it simply is too big for that; let alone small and fading powers like Britain. Hindus who like to feel important, imagine that there exists an anti-India policy, but such a policy exists only in India’s Islamic neighbours, not in the West. In fact, the secularist bloc encourages Hindu activists to blame the West, this way they don’t direct their attention to the Muslim factor nor to the secularists themselves.

An anti-Hindu motive is in evidence among the Christian Churches, but they control only a small part of the relevant media. More important is the Western Leftist and anti-racist animus, which is strategically anti-majority and ideologically anti-Hindu, because Hinduism is construed as the last stronghold of racism. One element they focus on is the Hindu majority’s “oppression” of the Muslims, a privileged community whom they defend in the West and therefore also defend in India. Another is the alleged oppression of the lower by the higher castes as allegedly decreed by Hinduism.

While some Hindus imagine that the Aryan Invasion Theory is long dead, in fact it is very alive among India-watchers: they think that Hinduism, which they falsely equate with Brahmanism, is the religion of race-conscious white Aryan invaders who imposed a kind of Apartheid (called varna, “colour”, interpreted as “skin colour” and meaning caste) on the dark natives. Anti-racism has conquered the West and is turning it against “intrinsically racist” Hinduism. So, this is a Western agenda which turns Western intellectuals against Hinduism.

Yet, normally this would be relegated to the past, and the anti-caste work of Modi’s Hindu movement would be acknowledged. Even if these missionary, anti-“Islamophobic” and “anti-racist” objections to Hinduism were deemed vitally important, they would still not overrule the acceptance of whichever democratic choice the Indian voters make. Except that there is a third and even more powerful factor: the influence of the Nehruvian secularists on their Western contacts (press correspondents, academic India-watchers) and hence on Western public opinion. A dog is wagging its tail here, but it is not an imperialist West dictating anti-Hinduism to its Indian sepoys. It is the West that is the tail, the dupe, the follower carrying out received orders; and it is a certain class of Indians that is the dog, manipulating the Westerners.

Practical conclusion Because the Hindu nationalist movement has always and willfully neglected the intellectual and public relations side of its struggle, the communications channels are massively in the hands of their enemies. The bottleneck in the information flow pertaining to all things Indian is controlled by them. It is they who egg the Western pressmen and India-watchers on to fight Modi to the death.

Any sympathizer of Hinduism or of a genuinely secular state in India should endeavour to correct the news about this election campaign, firing e-mails stating the real facts at the erring media. But the outspoken bias of the international media has been built up over the long term by the Nehruvian secularists, and it will take more strategic savvy and a more systematic effort to dislodge the present power equation.