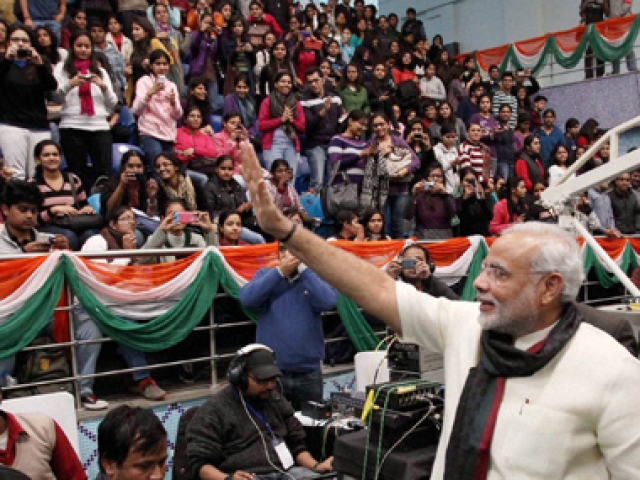 In the ongoing campaign to throw at Narendra Modi whatever dirt one can find, Ramachandra Guha (“Degradation of Discourse”, Times of India, 6 Jan. 2014) accuses him of yet another flaw: the use of foul language against political opponents. His article is illustrated with a photograph of Modi chatting with Prime Minister Manmohan Singh.

Now, maybe Modi has improperly called Rahul Gandhi a spoiled mama’s boy, which we all know to be untrue: from poor beginning, Rahul climbed his way up, and he only reached his present position by virtue of hard work. It is just slander to suggest that his family had anything to do with it. Yet, for foul language, the prize undoubtedly goes to Manmohan Singh. He has just recently accused Modi of being guilty for the post-Godhra riots; the allegation itself is worn-out, but the platform from where it was made, was higher than usual. Most people would rather be accused of a privileged birth than of responsibility for a massacre.

Singh thereby ignored and overruled several Courts that have acquitted Modi of any such allegations. We might expect such contempt of court from leftist agitators like Teesta Setalwad, herself embroiled in judicial proceedings for riots-related deceit, as it simply illustrates the usual self-righteousness of the left. We might also expect it from foreign press correspondents, babes in the wood who trustingly borrow from the less than truthful media accounts they are fed by their Indian sources. But such contempt of he judiciary is simply unbecoming of a Prime Minister.

So, others propose different allegations, this time based on reality. They say, for instance, that after all, “Modi is an RSS man”. Having been groomed in the RSS ranks, Modi will find it hard to refute that one.

In the 1990s, the prospect of the BJP coming to power led to some shrill reactions. It was going to throw a hundred million Muslims into the Indian Ocean, come down on women and Dalits, and more such horror scenarios. The “experts” concerned can count themselves lucky that this was just before the internet age, because today the quotations would come to haunt them. They would be laughed out of court for relying on their “secularist” contacts and parroting the dirtiest propaganda. At any rate, at august gatherings like the Annual South Asia Conference of Madison, Wisconsin, many professors grimly predicted the worst. Not that they were concerned about the prospective victims: the more the better, for they would only prove what a monster this BJP was.

Those few who sincerely wanted to minimize the damage which the BJP was sure to do, pinned their hopes on A.B. Vajpayee, the “moderate” contrasted with the “extremist” L.K. Advani. Alas, the specialist Prof. Paul Brass dashed all their hopes: “I think Vajpayee is a dyed-in-the-wool RSS man.” So, the man upheld in 2014 by Guha as a model of civility contrasting with the foul-mouthed Modi, was thought in 1996 to be another Hitler sure to work a catastrophe. That is why he ended up abolishing Parliament and killing all those millions when he served as Prime Minister in 1998-2004. Or, wait a minute, did he fail to do that? Was the consensus of the experts proven wrong by reality? Maybe the RSS is not such a predictor of inhumanity after all. (But it is true that Vajpayee in person thwarted Congress secularism in action when he helped Sikh taxi-drivers during the 1984 anti-Sikh riots.)

All the same, Modi’s beginnings in the RSS did not stand in the way of his economic breakthroughs. They did not prevent his innocence in the post-Godhra riots, as certified by the courts. They did not even keep a number of Muslims from voting for him. The reason is that the RSS is not altogether evil.

The role of the RSS in saving Congress politicians’ lives during the Partition, or holding the Srinagar airport until the troops arrived, thus making the reconquest of Pak-held territories possible (1947), or the RSS’s services in the defence against the Chinese invasion (1962), have largely been forgotten. What Modi has consciously experienced, however, is the RSS’s opposition against the Emergency dictatorship (1975-77). Many secularists like to ignore this episode because they themselves do not have such clean hands. Indeed, being naturally despotic, the Nehruvian secularists used precisely this intermezzo to insert “secular, socialist” into the text of the Constitution.

The declaration of India as a “secular” republic, without a proper parliamentary debate, is thus the only part of the Constitution that is historically undemocratic. Even closer in time is the frequent and large-scale RSS intervention in relief work after floods, earthquakes and other natural disasters. While the relief work of a Mother Teresa or a Graham Staines is always highlighted (and their ulterior missionary motives purposely ignored), journalistic or academic publications on the RSS somehow always forget to acknowledge its charitable work.

While the RSS has many mediocre and unimaginative people in its ranks (but committed and disciplined enough to do the above mentioned dirty work), it also has its success stories. Among these, Modi is no doubt one of the most spectacular. Whether he will do anything to further the Hindu agenda remains to be seen. If Guha now praises Vajpayee, it is in the hope that Modi will emulate Vajpayee in only being a time-server who sets aside all Hindu concerns once power has been attained. But the amount of persistent slander that Modi has had to face for twelve long years, now culminating in a condemnation by the Prime Minister, may finally have convinced him of the utter viciousness that characterizes India’s “secularists”. With him, at last, there is a real chance that he will spite them by getting serious about Hindu interests.