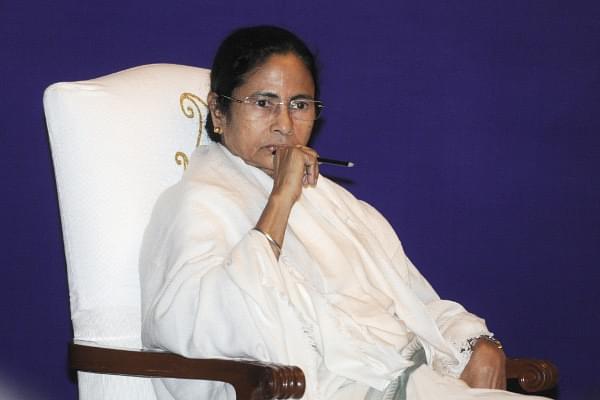 Trinamool chief Mamata Banerjee created quite a buzz during her second visit to New Delhi this week after sweeping the Assembly elections in Bengal more than six months ago.

The media coverage of her four-day stay in the national capital was disproportionate given the fact that she is only a chief minister of a state and heads a provincial party whose influence, at least at present, does not extend beyond Bengal’s boundaries.

Many chief ministers, including those of much larger and politically more significant states than Bengal, go to New Delhi often but their visits don’t get the media coverage that Banerjee is garnering.

The attention she has received can only be explained by her success in conveying the impression to at least a section of the media that she is the only one who can pose a credible challenge to the BJP at the national level.

Immediately after she punctured the BJP’s ambitions of unseating her from power in Bengal and led her party to a resounding victory to become the chief minister for the third consecutive term, she declared her intent of expanding the Trinamool’s footprints beyond her home state.

What Mamata’s eulogizers and supporters often overlook is that though she defeated the BJP’s much-vaunted ambitions of coming to power in Bengal, the BJP itself performed quite creditably in the polls by winning 77 seats (up from a mere three in 2016) and garnering a 38.13 percent vote share (as compared to 5.56 percent in 2016). But then, that is another matter.

After winning the Bengal polls, Mamata’s top aides and supporters in media started projecting her as a gutsy leader and the only one capable of taking on the BJP and Narendra Modi at the national level.

The Trinamool has targeted poll-bound Goa and Tripura to gain a foothold in and Mamata Banerjee has been inducting people from other parties, primarily the Congress, to position the Trinamool as a pan-Indian party.

The Trinamool has also been inducting ‘leaders’ from Tripura, Assam, Goa and, recently, Haryana and Bihar, into the party in a bid to position itself as a national party.

Mamata Banerjee is aiming at winning at least 35 to 40 seats (a bulk of them in Bengal and a smattering in a couple of other states) to emerge as the leader of the single largest non-BJP and non-Congress party in the Lok Sabha. She is also hoping that the BJP will fall short of crossing the majority mark and the Congress itself will bag less than 50 seats.

In that case--her dream scenario--she hopes to get all the regional parties together, win over some NDA constituents and get outside support from the Congress to keep the BJP out of power and then pitch herself for Prime Ministership.

A grave disaster for India

This amounts to putting the cart before the horse, but it must be said that Banerjee as the Prime Minister of India would be a disaster for the country.

There are many reasons for this as enunciated below:

1. A despot: She is a lady with a narrow and short-term vision geared primarily towards winning the next election, even if it means rigging the polls and beating the opposition black and blue. Mamata Banerjee is undemocratic and quite a despot who does not brook any criticism or dissent.

The horrific violence perpetrated on BJP workers and supporters--more than 200 have been murdered over the last two years, countless women have been raped, and thousands have had to flee their homes--is evidence enough of her strong authoritarian and undemocratic traits.

It is not only the BJP that she has targeted. After coming to power in 2011, Trinamool marauders murdered CPI(M) cadres, beat them up and displaced them from their homes and businesses.

Her next target was the Congress, even though it was her ally. She nearly decimated the Congress in Bengal through the same tactics and also by luring away a large number of Congress leaders and inducting them into her party.

Mamata Banerjee has, over the past eleven years, demonstrated repeatedly and unequivocally that she is intolerant of opposition and does not believe in democracy.

At a personal level, too, she is autocratic and does not brook dissent or any contrary opinions.

Even her senior ministers are wary of incurring her wrath and prefer to keep their opinions to themselves. She is in the habit of snubbing them in cabinet meetings and even in public.

Thus, despite her strenuous proclamations about her belief in democracy, she is the perfect personification of a despot.

2. Poor governance: Mamata Banerjee’s track record in governance has been abysmal. As the Union Railway Minister, all that she did was introduce new passenger trains, especially for Bengal. She neglected the vital task of upgrading tracks and other crucial improvements in rail infrastructure. She refused to hike passenger fares and that took the PSU behemoth deeper into the red.

Her focus as the railway minister was limited to Bengal and getting new trains like the Duronto Express--she even made the railways put an amateurish painting of hers on the coaches--on the rails. Her populist measures bled the railways and the Railway Board was reduced to a rubber stamp.

She also held some other portfolios like Sports & Youth Affairs and Coal & Mines at the Centre, but her performance was below par there as well.

As chief minister of Bengal, Mamata Banerjee has relied on populism to get votes. Bengal’s debt burden has doubled over the last eleven years, crime has increased exponentially, she hasn’t inspired confidence among investors to come to the state and Bengal has not seen a single big-ticket investment in the past decade, unemployment is high and the state’s coffers are dry. The second biggest source of revenue for the state is sale of liquor, and that is proof enough of the sorry financial state of Bengal.

3. Lacks vision: Mamata Banerjee has no long-term vision of where to take India. She has zero exposure to global affairs, strategic issues, diplomacy, defence, international trade and related matters. She cannot be expected to enhance India’s image and prestige abroad.

Mamata Banerjee, thanks to her Muslim appeasement and her propensity to play to the gallery, will never be able to stand up to China and Pakistan.

She has zero knowledge of economics and commerce and, combined with her populism, can be expected to take the country deep into the red within a short span of time. She can never inspire confidence among global investors and business leaders.

But above all, her lack of strategic sense and vision for the country will cost India dear and take the nation back by a few decades at least.

Mamata Banerjee’s sole focus is only on winning elections, and for her all means are justified to achieve that end. From announcing doles that will drain the country’s exchequer, to striking deals with even radical forces, Mamata Banerjee is willing to go any distance. That holds grave and dangerous implications for the country.

Yes, she possesses indomitable courage and has spunk. She is a street fighter and deserves all credit for unseating the communists from power in Bengal.

Her political opponents would do well to highlight the reasons for this to the people of the country. Not just for its own sake, but for the sake of the country as a whole, the BJP needs to make Indians aware of Mamata Banerjee and her many failings.