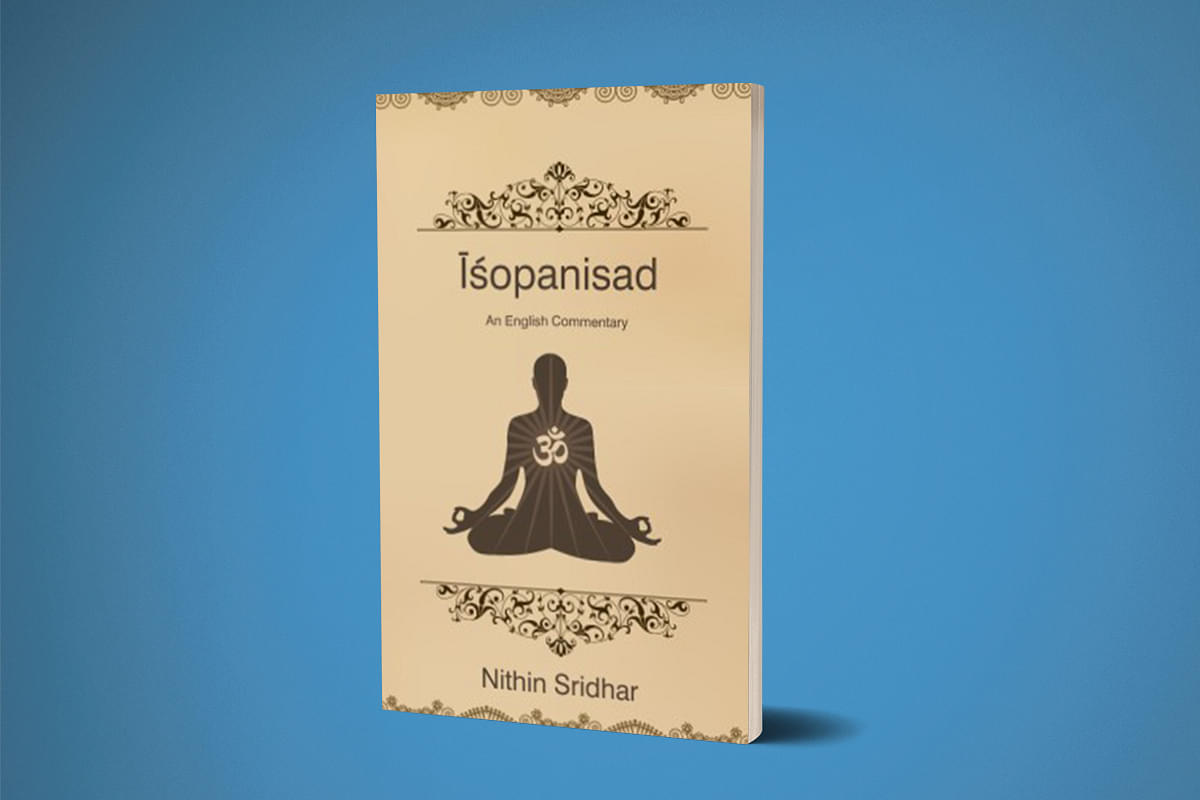 Isopanisad: An English Commentary. Nithin Sridhar. 2021. Subbu Publication. Rs 348. It is available for purchase on Amazon and the publisher website.

A study of the scriptures (svadhyaya) and teaching and disseminating (pravacana) them is enjoined as a very important activity in the Taittiriyopanisad.

The word svadhyaya deserves attention. Pravacana is also possible only by svadhyaya. The meaning of it is generally presented as sva-adhyaya — reflecting upon oneself. But in a sanskrit-sanskrit dictionary Sabdakalpadruma (Vol 5, Page 5) the meaning of the word is given as follows:

Based on this, svadhyaya points to that activity where one has to carefully study the text (especially the Vedic text) over and over again and also with a great amount of focus and perfection. At the outset itself, let me state that the commentary of Nithin Sridhar on Isavasyopanisad is based on such a sincere svadhyaya!

The very structure of the book shows the great ekagrata — one pointed focus — with which Sridhar has approached the subject. The mantras of the upaniṣads are given, followed by a word-to-word translation, meaning and analysis and finally a summary of the discussion. The references to the textual sources pertaining to the discussion are given at the end of each of the mantras. It is in this format that each of the 18 mantras of Isavasyopanisad is presented. And the second part of the book is a detailed discussion on the salient teachings of the upanisad in four sections.

This interpretation follows the Advaitic philosophy and based on the bhasya (commentary) of Sri Sankara Bhagavatpada. Sri Aurobindo’s views are also quoted in the context of Mantras 9 and 16.

I thoroughly enjoyed the lucid flow of the commentary throughout the book. I will highlight and share my views on those elucidations that I enjoyed most:

1) The clarification on the term ‘ekam’ used in Mantra 4 was insightful. The difference between the Abrahamic idea of one god and the upanisadic view of ‘one god’ was a very fundamental clarification. It needs to be understood and remembered by one and all, especially in the current times when the cross currents from various religious thoughts are very intensely felt on Hindu minds.

2) I enjoyed reading the approach of Sridhar in dealing with the tricky portion of vidya, avidya, sambhuti, and asambhuti. Sridhar has not rushed through this portion. The idea of karma, devatopasana, karyabrahma and avyaktopasana has been discussed in a very detailed, systematic and clear manner. The samuccaya among these practices that has been presented by the upanisad and clarified by a commentary of Sri Sankara-Bhagavatpada has been presented with clarity.

With my background in study and research in Yoga texts — the discussion on karyabrahma and prakrtyupasana reminded me of the parallels in yoga sutra. The self-same concepts have been presented by sage Patanjali in the sutra भवप्रत्ययोविदेहप्रकृतिलयानाम् (1.19) where sadhakas, through the attainment of samadhi on indriyas and prakrti, become videhas and prakatilayas respectively.The upanisadic connect/inspiration to this yoga sutra becomes clearer to me by this.

Continuing with the same topic — while very meticulously adhering to the interpretative framework of Sri Sankara Bhagavatpada – Sridhar also carefully presents his views on vidya and avidya (verses 9-11, pages 73, 74), which seem to be very much in line with the upanisadic thought flow.

Further, the process of krama-mukti under this section has been very well explained without leaving any element of doubt. To be specific, the idea that krama-mukti should not be taken as liberation without atma-jnana, is clarified under footnote 10 (Page 72) and is worth noting. The footnote says that even the one in the path of krama-mukti will attain atma-jnana in satya-loka and only then attain liberation.

As I was reading this portion, certain yoga sutra inputs regarding krama-mukti flashed in my mind. In sage Vyasa’s commentary to sutra — भुवनज्ञानंसूर्येसंयमात् (YS 3.26) — the various higher lokas are described where sadhakas, at various levels, journeying towards krama-mukti reside. The description of these lokas and the residents of those higher lokas and their sadhanas are described in the commentary to the sutra. The reference to the content therein, in a future edition of Sridhar’s commentary, may quench the thirst for knowledge of those who would want to know more about those higher lokas and what sadhakas do in their journey to krama-mukti.

3) The discussion on the meanings of the terms “vyuha and samuha” in Mantra 16, where the views of Sri Aurobindo at the psychological level are brought in by Sridhar, is worth noting. The commentator clarifies that the rays here are taken as citta-vrittis/thoughts that are to be regulated towards receiving the knowledge of the Satya Brahman.

On reading this discussion, I, as someone interested in poetry and, thereby, in imagery and symbols, started thinking about the upanisadic symbolism in this mantra where an upasaka in his death bed is praying to the Sun god. He requests the Sun to expand/spread or even take away/remove the rays (Sri Sankarabhasya — व्यूहविगमयरश्मीन्स्वान्) and withdraw or unite the light (Sri Sankarabhasya — एकीकुरुउपसंहरतेजःतावकंज्योतिः I imagined many ideas regarding the purpose of such a prayer. Could it be:

Oh! Sun God, at your biological level you keep on doing your routine act of expanding and withdrawing of rays. May you be capable of fulfilling your duty for the cosmos well. But in my case death is approaching — hence my routine and duties connected with this body is ending. So lead me to my desired goal of realisation of Satya Brahman.

Or is the seeker, by referring to the regular act of the Sun expanding the rays during sunrise and contracting rays at the sunset, wants himself to be engulfed by the expanding sun’s rays and then gathered through the sun’s rays and transported to the realm of Surya — to directly perceive the auspicious Satya Brahman?

I was tempted to imagine all these by looking at the symbols and imagery. But Sridhar, unlike me, does not indulge in any such imagination. As a commentator, he keeps his feet firmly on the ground and presents his interpretation within the philosophical and psychological framework.

4) Another beautiful aspect about the commentary is the way in which the cross-references are presented by the author. Various Upanisadic texts, smrtis and other vedantic works of Sri Sankara Bhagavatpada are quoted. But the quotes are given to a specific end. Those references are not adduced merely to show the scholarship of the commentator. Quotes are brought in only to serve as explanation or clarification on the specific point under discussion. This shows how serious the commentator is about his job.

Many instances can be cited from the commentary in this regard. For example: The purport and purpose of the prayer to Pusan that is hinted in verse 15 of Isavasyopanisad has been put in perspective by bringing in the details of a suryamandaladaksinaksi upasana on Satya Brahman from Brhadaranyakopanisad (5.5). The details provided herein from the Brhadaranyakopanisad aptly clarifies the purpose of this prayer to Pusan of Isavasyopanisad (Pages 87-88). This to me is a classic example of quoting and referencing with a specific purpose in the task of interpretation. This is worth emulating and a good lesson for those desirous of writing interpretations and commentaries. This was about part one where each of the mantras was explained.

5) Part two of the work conveys the philosophy of the upanisad in four major parts, namely — the theme of the upanisad, the pravrtti, nivrtti paths and the third path. The beauty of this section is that it's a succinct presentation of the entire Hindu way of life which comprises karma, bhakti and jnana, samskaras, yajnas, dharma, the samanya and visesa, varna and asrama system and the underlying thought behind it, and the three-fold upasana-puja-bhakti. All these concepts are discussed herein with textual references, with clarity of understanding and presentation.

As I was studying this portion, it occurred to me that the commentator could have included a brief note on dinacarya and rtucarya (daily and seasonal routines), though it could have been a slight digression from the vedantic and dharmasastric framework within which the commentator is explaining the concepts. But it is to be noted that the smriti texts do describe ideal daily routines — dinacarya — for a grhastha. Ayurveda, in which dinacarya and rtucarya are mentioned, is an upaveda. Based on the brief hint on dinacarya and rtucarya, an interested reader can explore more. If these two aspects are included, any seeker, inspired by the work and who would want to follow the vedic-upaniaadic way of life, will right away get a practical starting point in his day-to-day life.

In my view, this second portion in itself can become a booklet that introduces the Dharmika Hindu way of life and the goals therein. The sections herein are crisp and well referenced. But it has to be mentioned that the final section of the book (Pages 183-191) on the third path — the path to suffering — jolts the reader and gives a reality check. The suffering that the unmindful way of life brings is presented vividly with references from various textual sources. Though the description of the sufferings in various narakas might disturb the unprepared mind, the author might have felt that such a shock treatment might be needed to urge the readers to take up the pravrtti and nivrtti paths enjoined in the sastras with all seriousness.

I have a few friendly suggestions to conclude.

a. On the conclusion, I have already said that the book ends with the description of the third path — an unmindful way of life, a life swayed by the distractions of the senses and emotional upheavals of the mind. There could have been a reassuring conclusion after creating a sense of much-needed remorse and introspection in the reader by detailing the consequences of the tritiya marga. Quotes from the Bhagavad Gita where the Lord gives hope would have helped.

(Translation: Even if thou art the most sinful of all sinners, yet thou shalt verily cross all sins by the raft of knowledge).

Further, the spirit of Swami Vivekananda’s statement that “each soul is potentially divine”, and we are all offspring of immortality, ‘अमृतस्यपुत्रावयम्’, and not eternal sinners could have been adduced. This characterises the eternal optimism that Hindu dharma has in humanity. Thus this wonderful exposition could have ended on a more positive note.

b. In part one, at the end of each of the mantras, a few questions and scenarios from life or activities for thinking and reflecting could have been provided to make the reader engage more with the content of discussion.

c. In the future editions of the book, as an appendix, an alphabetical list of the set of concepts and frameworks such as arisadvarga purusartha esanatraya sadbhavavikara karma-prabheda (sancita, agami etc) that were beautifully discussed in the book could be added with page numbers in the commentary where they are elaborated.

e. A flow chart in the appendix that summarises the discussion on the three paths could help the readers develop a quick recap of the entire focus of the book.

With these suggestions, I conclude my review and I heartily congratulate Sridhar once again for this wonderful achievement of writing a lucid commentary on Isavasyopanisad to generate renewed interest among people in ever relevant upanisadic lore. Indeed, it is an elegant expression of svadhyaya.