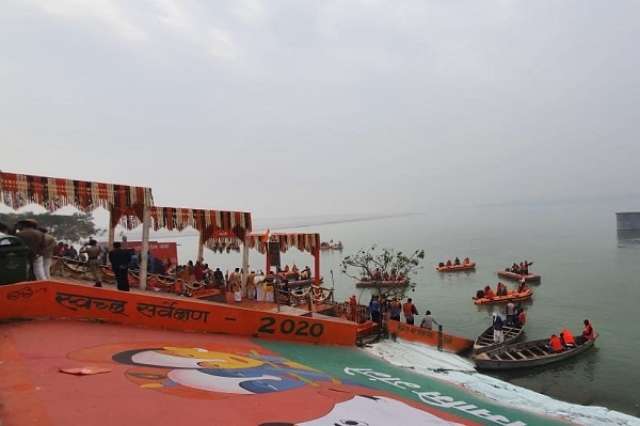 The ghat at Bijnor.

Bijnor district in Uttar Pradesh is in the limelight for good reasons. Chief Minister Yogi Adityanath is all set to give the district its deserved spot in the state tourism map, where it has been long ignored.

Bijnor will soon be given the status of a ghat on the Ganga in the river's journey towards Kanpur and Benaras.

With this event, Bijnor marks the west-to-east connect within Uttar Pradesh. Ganga serves as the connecting nerve, from this corner of the state to Ballia and Kanpur.

Namami Gange's vision and mission is celebrating this aspect with a boat ride that is set to take devotees and enthusiasts on a unique journey.

The five-day Ganga Yatra under the Namami Gange mission begins today. Bijnor marks an important beginning to this meaningful and symbolic river trail in the context of Uttar Pradesh.

Bijnor is where the Ganga begins to sprawl into Uttar Pradesh, after leaving Uttarakhand. The Ganga Barrage in the district is an important milestone on the Pauri-Delhi highway. It is a valued destination for locals and people of the region.

For several decades, the area around the Ganga Barrage has remained in the shadows of neglect. There are several possibilities emanating from the area that can help the state explore its own flora and fauna, cultural elements and dimensions.

Adityanath's visit to the Ganga Barrage, preparations for which have been on full swing, will kick start the landmark Ganga Yatra.

The attention being given to Bijnor reflects the Centre's own pointed attention to details involving the Ganga trail and the lesser known/celebrated associated destinations.

Preparations are on in Ballia, where the stretch of the Ganga Yatra from Ballia to Kanpur was being inaugurated, Namami Gange said on Twitter.

This step under the Namami Gange mission is bound to draw Ganga enthusiasts from nodal point National Capital Region towards Garhwal and Kumaon (regions of Uttarakhand) via road, and towards eastern Uttar Pradesh on boat.

This gives travel an extra dimension to visitors from across the country. It’s an exciting development leading to Kumbh in Haridwar. The event also helps bring to light Bijnor's cultural identity, which has, over the decades, remained under the shadows.

Not only that, Bijnor's access to Hastinapur (another destination in the Yatra) and the presence of Vidurkuti makes it a valued and extended destination to Mahabharata-centered circuits that Uttarakhand and Haryana can work upon in partnership with Uttar Pradesh.

Adityanath would do well to develop it alongside his focus on Mathura-Brindavan-Govardhan circuit to connect geographies, ghats and ‘bhavas’. This will automatically bring Ganga and Yamuna closer for devotees of Krishna.

At the event in Bijnor, Adityanath spoke about the importance of developing the Ganga circuit. He also mentioned steps towards helping local farmers, who choose to grow fruit bearing trees in the area, by making their produce reach the international market.