Brothers In ‘Arms’: Why Uttarakhand And Haryana Should Walk Together Using Gita Mahotsav, For A Larger Hindu Cause 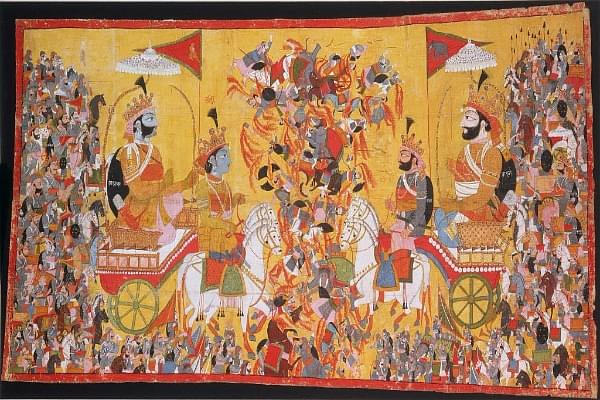 A painting that depicts the battle of Kurukshetra (Wikimedia Commons)

Uttarakhand is Haryana's partner state at the ongoing International Gita Mahotsav.  The Mahotsava is dedicated to the celebration of Srimad Bhagavad Gita — the ultimate guide to the many questions on dharma — that surged before Arjuna on the battlefield of Kurukshetra.

The partnership with Uttarakhand was announced by the Haryana Chief Minister ML Khattar on 25 November. Last year, their state partner was Uttar Pradesh.

Battlefields, the battle for dharma and battle-ready soldiers are momentous aspects that give these two states a close common ground.

Uttarakhand contributes in preparing and giving India’s bravest men for the battlefield, and Haryana, the land of India’s brave soldiers is the spiritual ground for the biggest battle for dharma.

As India’s civilisational Kurukshetra becomes intense and widens, these two states must share a cultural responsibility for propagating the understanding of the Mahabharata.

Their moving closer, with Mahabharata as the medium, is necessary in the contemporary context.

Khattar has announced that Kurukshetra will be turned into an international tourist destination. His government is pulling all stops for putting Haryana on the global tourism map.

Fifteen nations are participating in the Mahotsava and a Gita Jayanti Mahotsava will be organised in Australia in March 2020.

Kurukshetra has been a spiritual destination for Hindus as a backdrop and ground for Krishna's teachings of the Srimad Bhagavad Gita. Khattar is trying to put the focus on the cultural DNA of the state — by upholding Kurukshetra in his cultural priorities. He wants to draw more and more nations and people towards Haryana.

Amidst these efforts, the Khattar government's gesture towards Uttarakhand is a meaningful one. It could serve a perfect chance to the Trivendra Singh Rawat government for working towards a stronger cultural consonance based on the rich heritage surrounding Vyasa’s work Mahabharata.

It is believed that Uttarakhand is where Veda Vyasa wrote the Mahabharata with Ganesha's help. Vyas Gufa — the cave in Mana in Garhwal — is a pious destination for many. It is believed that Vyasa worked on the epic from this cave.

The Rawat government is identifying and strengthening its own areas of focus in the state’s celebration of the Mahabharata. Uttarakhand's presence as a partner state at the Mahotsava has the potential of establishing a pan-India and global outreach from Kurukshetra based on the Mahabharata connection.

Uttarakhand is known for its spiritual tryst with the Mahabharata and its cultural longevity, which draws a lot from people's devotion for the Pandavas. The precious aspect here is that the celebration is embedded in local lives, rituals, sacred ceremonies, festivals, temples, tales and villages.

The involvement of the state as a partner in the festival dedicated to the Srimad Bhagavad Gita, hence, makes Uttarakhand a first natural cultural ally.

Uttarakhand must look at building a futuristic outlook to this cultural relationship with Haryana.

The celebration of Mahabharata in local traditions and lives has broadly remained confined to the hill state, which is also known as Devbhoomi.

Largely, locals who are the propagators of the region’s connection with the Pandavas and Mahabharata are also the audience of the epic’s celebration themselves. The idea of a permanent cultural partnership with Haryana, hence, should be deeper than just finding more audiences for Uttarakhand's own celebration of the Mahabharata. It should reach Uttarakhand's urban population.

Uttarakhand's spiritual connection with some significant episodes of the Pandava's journey in the great epic has enriched local traditions for centuries.

River Tons and the Tons Valley are the throbbing cradles of stories associated with Krishna and the Pandavas.

Pandukeshwar, Vyas Pothi, Mana village and Hanuman Chatti, were among landmarks that the state tourism department under the Rawat regime marked as focus points in the “Mahabharata circuit” after him assuming office.

The hill state abounds with local tales which have been passed on through generations via oral heritage. These trickle into the performing arts, which must go into giving the state the deserved visibility.

A lot of these tales correspond to the living tangible heritage, at sites such as Lakhamandal. It is believed to be the site for the lakshagrah or the house of lac, which was built by the Kauravas to trap the Pandavas in a fire.

Lakhamandal, Hanol-Thadiyar, Deora, Naitwar and Dodital are other sites pitched by the Uttarakhand government as destinations for their connection with Mahabharata.

Jaunsaar-Bawar, which lies within a cultural cusp with Himachal Pradesh, is another important destination for its deity rituals, festivals and ceremonies dedicated to the sacred, and people's association with the Pandavas and Mahabharata.

People of upper Garhwal have preserved their emotion for the Pandavas as well as Duryodhana.

Further, Kotdwar, which is believed to be a hub of education in the ancient times, and is considered the gateway of Dev Bhoomi Uttarakhand's Garhwal region has the chance of developing as a hub for dharmic education owing to the Rawat government's thrust on its revival, beginning with a small step such as a name change.

According to this Zee News report, the Rawat government is pitching for a name change for Kotdwar — on the lines of Rishi Kanav. "Kanavashram" — the name — was used by Rawat in a speech made recently in Kotdwar.

Uttarakhand needs to become Haryana's spiritual partner state through the gateway of Haridwar, as much as it needs to deepen its partnership with Uttar Pradesh (western region comprising Mathura, Hastinapur, Bijnor) in Mahabharata's context.

The International Gita Mahotsava should be seen, taken and creatively used by the Rawat government as an opportunity to sculpt the hill state's own fertile pitch for a pan-India Mahabharata celebrations.

Its partnership with Haryana based on the Mahabharata definitely needs to continue beyond this year and event, and should not be merely skin deep in approach.