Ayudha Puja: The Worship of Weapons 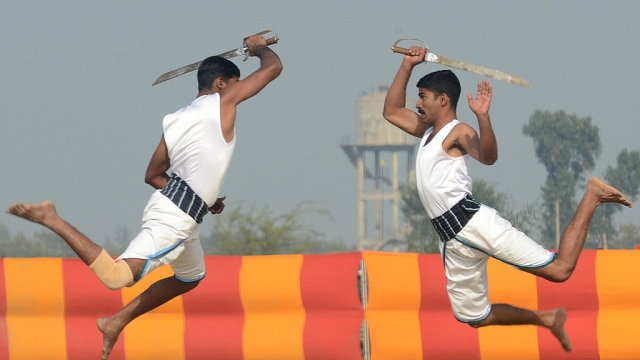 Ayudha puja or shastra puja is the worship of weapons that takes place on the ninth day of the Navaratri festival. Weapons are retrieved for use with the blessings of the Goddess on the tenth day, Vijayadasami. Ayudha puja is a pan-Indian phenomenon, although it is traditionally confined to those closely connected with, and responsible for, the use of weapons such as royal families and schools of martial arts such as kalaripayattu. Today, worship of weapons is primarily carried out by policemen, security personnel and the army. Most Indian army units have long standing traditions of ayudha puja.

Multiple Hindu traditions surround Vijayadasami, notably that of Durga slaying Mahishasura and Rama killing Ravana. Less famous is that the Pandavas retrieve their weapons hidden in a shami tree after thirteen years of exile on Vijayadasami. In memory of this event, the Maharaja of Mysore proceeds on the tenth day on a caparisoned elephant to the Bannimantapa, where he pays respects to the Shami or Banni Tree. This is the grand procession through the thoroughfares of Mysore that the Dussehra celebrations are renowned for.

Shastra puja is present among Sikhs as well. Guru Gobind Singh encouraged “shastar puja” or worship of swords along with the chanting of Chandi di Vaar (also called Vaar Sri Bhagauti ji ki), composed by the Guru and is the fifth chapter of the Dasam Granth. The Vaar is based on a episode from the Sanskrit Markandeya Purana1 and describes the conflict between devas, led by Indra, and asuras led by Shumba and Nishumba, where the supreme goddess is transformed into a liberating divine power in the form of a sword. The Chandi di Vaar evokes a powerful warlike temper aided by powerful language and eloquent similes and is especially dear to the Nihang Sikhs, the most martial order among the Sikhs. The names Chandi and Bhagauti (Bhagawati), the origin in the Markandeya Purana which houses the Devi Mahatmyam, and the worship all exemplify the close connection between Hinduism and Sikhism.

Some leftist academics have manufactured a needless controversy about Vijayadasami and Navaratri -- that Durga represents an Aryan deity who kills the Dravidian Mahishasura and that the ayudha puja is an “Aryan evil,”. However, Tamil Nadu itself has an equally hoary tradition of devi and weapon worship. The worship of the war goddess Kotravai is recorded in Sangam literature. In fact, the same goddess who killed Shumbha and Nishumba, glorified in the Devi Mahatmyam as well as the Chandi di vaar, is worshipped in Tamil Nadu as Nishumba soodini (slayer of Nishumba). She personifies valor and was the war deity of the imperial Cholas themselves. The founder Vijayalaya chola built the Nishumba soodini temple near Kumbakonam.

Another popular Tamil deity, Muruga, is also a war deity. Thai Poosam is one of the most popular festivals of Tamil Nadu (albeit not well known in North India) and is celebrated with great gusto even by diaspora Tamils in Singapore, Malaysia, Sri Lanka etc. The festival, which falls in January/February, celebrates the day Goddess Parvati empowers Muruga with her Shakti by bestowing upon him the spear, his weapon used to lead the devas to victory against the asuras. Yet another case where worship and celebration is associated with the weapon. Indeed, Muruga’s spear and Vishnu’s Sudarshana chakra are unique in that these are two weapons that are worshipped on their own right, when the deities wielding them are not in the picture at all !!

What does such worship of weapons tell us about Hinduism?

It points to certain fundamental distinctions between Hindu or dharmic spirituality and the Abrahamic traditions. But equally importantly, it tells us a lot about the Hindu approach to violence and, by implication, non-violence.

For one, even as kings worshipped deities of war and their weapons and literally drew inspiration for battle from these, Hinduism readily provides the allegorical and spiritual interpretation of these stories for sadhakas. The battle between devas and asuras can be seen as an internal one. The slaying of mahishasura is the destruction of tamasic tendencies within us. And immediately after receiving the spear from Parvati, the story of Muruga has him as the personification of the highest Advaitic truths, teaching the meaning of “Om” to Lord Shiva himself. This story is the background to Muruga being worshipped as Swaminatha (the “Swami” who taught the “Natha” Lord Shiva himself).

Secondly, unlike Abrahamic traditions, Hinduism sees divinity in all of creation and God as both immanent and transcendent. Such an attitude infuses divinity into all activities of life. Work itself is worship, and this philosophy of karma yoga is yet another context in which to place the veneration of weapons. Although it means “weapons”, ayudha is also a generic term that means "instrument or implement." On the ninth day of Navaratri, everyone cleans, decorates and worships the implement that enables them to make a living, seeing a manifestation of the divine in that. This applies to musicians and musical instruments, farmers and the plough, students and their books, as well as factories and machinery. And of course, it applies to soldiers and their weapons.

It is perhaps more interesting to observe how a culture that has a tradition of worshipping weapons approaches questions of war, violence and non-violence. Dharma, Artha, Kama and Moksha are the four great “purusharthas” (goals of life) of Hinduism. Dharmic conduct is the basis upon which all the other goals of life are to be attained. At an individual level, it is the dharma of a soldier to fight if necessary. At a social level, the ruler must enforce dharma and protect society. Use of weapons is seen as part of a sacred duty to protect dharma. This infusion of divinity and dharma into the use of weapons, in our minds, largely explains why wars in India were circumscribed by a strict code of conduct. The most important component of this code is that wars were fought between soldiers only and other segments of society were not involved.

As far back as the 4th century BCE, Megasthenes the Greek Ambassador to Chandragupta Maurya describes the Mauryan army as a permanent and professional body, recruited, trained and maintained at state expense, and which scarcely impinged on the agricultural masses. “It therefore not infrequently happens that at the same time, and in the same part of the country, men may be seen drawn up in array of battle, and fighting at the risk of their lives, while other men close at hand are ploughing and digging in perfect security.”2

Suleiman, an Arab merchant who made several trips to India during the first half of the ninth century, says: “The Indians sometimes go to war for conquest, but the occasions are rare. I have never seen the people of one country submit to the authority of another... When a king subdues a neighbouring state, he places over it a man belonging to the family of the fallen prince who carries on the government in the name of the conqueror. The inhabitants would not suffer it to be otherwise.”3

“Once again one is reminded of Megasthenes’ description of agriculturalists ‘ploughing in perfect security’ while armies did battle in the next field. Although the ploughmen may have had a stake in the outcome of the battle or may have contributed to the equipage of one of the protagonists, they were not expected to get involved. Warriors fought with warriors; the ploughman’s dharma was to plough”.4

This remarkable similarity in the accounts of two outside travelers separated by over 1000 years suggests that there must be some truth to this idea, stunning though it is in its idealism when viewed from a modern perspective. It is also a remarkable anticipation of the Geneva conventions of the 20th century that required armies not target civilians during times of war. And it stands in stark contrast to the “total war” approach of the Islamic invasions of India, characterized by plunder and destruction of cities and large scale rape, murder and forced conversion of the general populace.

Finally, the tradition that sees divinity in weapons also prizes ahimsa (non-violence). It is the Hindu ideal of ahimsa that inspired Mahatma Gandhi’s satyagraha, a movement unique in the annals of world history. But the fact that Gandhi was inspired by Hindu ideas cannot be interpreted as Hinduism’s abhorrence for violence under all circumstances. Indeed, absolute non-violence is a mandate ONLY for sannyasis, and Gandhi’s genius lies in marrying his sannyasi-like ahimsa with the demands of a political movement. Whether in martial customs or the injunctions of the Bhagavad Gita, Hindu tradition is clear that a refusal to fight on grounds of non-violence often only empowers adharma. The 75th hymn of the 6th mandala of the RigVeda is glorious eulogy to the Ratha, the great warrior in the chariot that protects dharma

The Arthashastra, that masterpiece of statecraft, deals with defence and external relations at length, and lays out sama, dana, bheda, danda (conciliation, gifts, dissension and force) as a way to deal with other kingdoms. War is the last option, but imperative if other options fail. Chanakya then proceeds to describe how the king should treat a subjugated kingdom: ‘having acquired new territory the conqueror shall substitute his virtues for the enemy’s vices and where the enemy was good, he shall be twice as good. He shall follow policies that are pleasing and beneficial by acting according to his dharma and by granting favours and exemptions, giving gifts and bestowing honours.’5

With this balanced understanding, it is appropriate to end this piece on the worship of weapons with the following remarkable ode to non-violence from the Mahabharata:

Gifts made in all sacrifices; ablutions in all holy waters

Gifts made under all scriptural injunctions; the merits of all these do not add up to that of ahimsa

The man of ahimsa is father and mother to all creatures

These, O chief of Kuru's race, are some of the merits of ahimsa

Ahimsa’s merits are so many that they cannot be listed even if one were to speak for a hundred years.

-- Bheeshma in the Anushasana Parva of Mahabharata