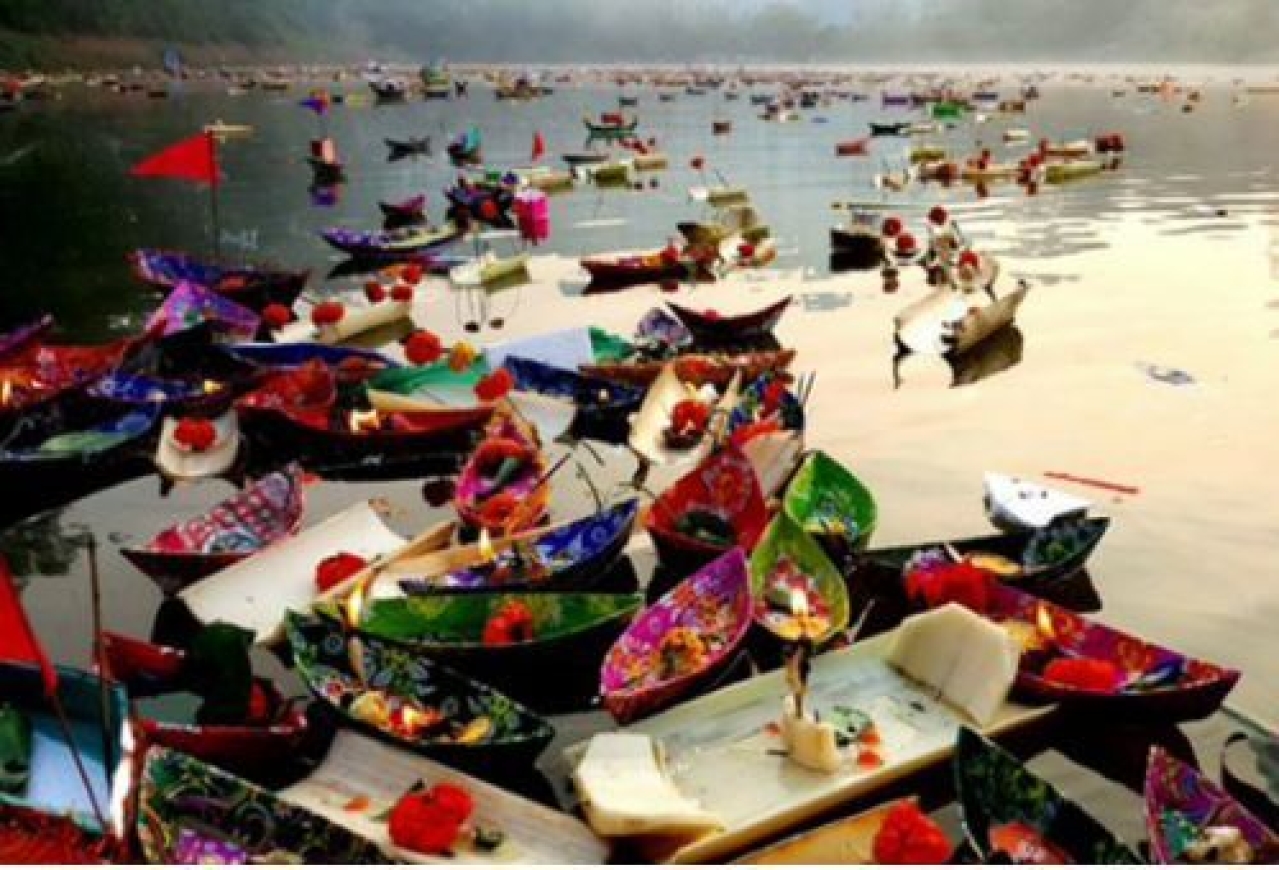 Bali Jatra rituals ... a recreation of the journey to Bali

During the second and third centuries BCE, when the Mauryan kings were expanding and consolidating their empire, seeds of a major change were being sown in east coast of India. Within a period of two centuries the seed would turn into a large banyan, with its canopy covering almost 4.5 million square kilometres of land mass outside India. That seed was the maritime trade from Indian ports.

Every year, on the day of Kartik Purnima, the city of Cuttack begins its weeklong festival of Bali Jatra - the journey to Bali. Small boats made of paper or banana trunk are floated in rivers and water bodies. The festival is a recreation of the annual event in ancient India, where merchants would sail off to cities in Southeast Asia to trade. The retreating monsoon winds would power their sails. The merchants would then settle in the port cities of Java or Sumatra to carry out their business and would return to India with the advancing monsoon winds. The understanding of the monsoon winds was a breakthrough, which led to phenomenal changes in the history of Southeast Asia.

Archaeological evidence from Thailand suggests that Indian Agate and Carnelian beads were being exported to Southeast Asia as early as second or third centuries BCE. Another interesting piece of evidence comes from Bali in Indonesia. Pottery known as the ‘rouletted ware’ has been excavated, which was typical of ancient east coast of India. One such pot contained remains of rice husk, which was dated back to 600 – 400 BCE. This, in fact, pushes back the popular assumption of trade contacts with Southeast Asia by almost half a millennium.

The sea faring merchants sailed from the ports of Tarmlipti (modern Tamluk in West Bengal), Cuttack, Puri, Chilika, Machilipatnam (Andhra Pradesh) and Arikamedu (Pondicherry). Periplus of Erythraean the Sea, mentions most of these ancient ports as busy emporiums. Ptolemy’s ‘Geography of Ancient India’, says many prosperous ports of Odisha like Puri, Kornark and Balasore. These ports were said to have overseas trade contacts.

Dr Sila Triapti of National Institute of Oceanography, Goa, has written extensively on the maritime contact between India and Southeast Asia. In one of his works, he talks about the discovery of pottery with Kharoshti-Brahmi script in Chandraketugarh (West Bengal) and Bali in Indonesia. This is a major find, since we know that Kharoshti was a popular script of Gandhar in north western India. It can be assumed that there was a community of Gandhari merchants who settled in Bengal. The presence of Gandhari merchants, so far away from their homeland indicates the lucrative nature of business these ports carried out.

As trade flourished in early centuries of the Common Era, the Indian community started to settle in the port towns of Southeast Asia. They established their communities and built temples. They took with them their customs and rituals and started their assimilation with the locals. The intermingling of communities and customs resulted in the emergence of the first Indianised kingdom of Southeast Asia in Funan (modern Cambodia). According to a seventh century inscription in My So’n, Vietnam, an Indian Brahmin named Kaundinya, married the Naga princess Soma and established the kingdom of Funan. Whatever the legend might be, we know that there were a series of Indianised kingdoms that appeared in Southeast Asia.

The customs and religions of India merged with the local belief systems and gave rise to a syncretic system, which to a large extent can be seen even today. The region underwent many changes since the formation of the kingdom of Funan in ancient times till the arrival of Islam in late medieval period. The kings patronised puranic gods like Rama, Ganesh, Durga and Vishnu. Great temples dedicated to these deities were built from Vietnam in extreme east to Thailand and Myanmar in the north. Angkor Wat, the largest temple complex in the world was once dedicated to Vishnu. The many bas reliefs on the temple walls depict scenes from the Ramayana and Mahabharata. There are various chambers which have the Yoni and Linga, the symbolic depictions of Shakti and Shiva. Soon after its construction, in the twelfth century, Angokr Wat was transformed into a Buddhist temple, which it continues to be. This was probably an indication of spread of Buddhism in Southeast Asia.

With the traders from mainland India, Buddhist missionaries too arrived in Southeast Asia. The syncretic religion of Southeast Asia slowly became predominantly Buddhist. However, the elements of Hinduism and animism remained and can still be seen in the popular culture. Apart from Indonesia and Malaysia, which embraced Islam, Southeast Asia still carries on with its Hindu-Buddhist culture. The language, the script, the calendar and festivals in a large part of the region are still rooted in Hinduism and Indic culture.

The process of Indianisation of Southeast Asia happened in a sharp contrast to the European colonisation of the Americas and Asia. The exploitation of local resources, siphoning off the wealth and extermination of the native population, which was the hallmark of European colonisation was completely absent in the Indianisation Southeast Asia. The relationship was based on cultural exchange and assimilation. Though trade played an important role in the relationship, there was no repatriation of wealth or resources. This is probably the reason why the European colonies fought for freedom while the cultural colonies of India fondly nurture their heritage.

The festival of Bali Jatra, not only celebrates the ancient custom of trade voyages from India, it also in a way, celebrates the cultural and religious exchange the two regions have had since ancient times.