BJP’s Dalit Outreach Must Be More About Substance Than Symbols 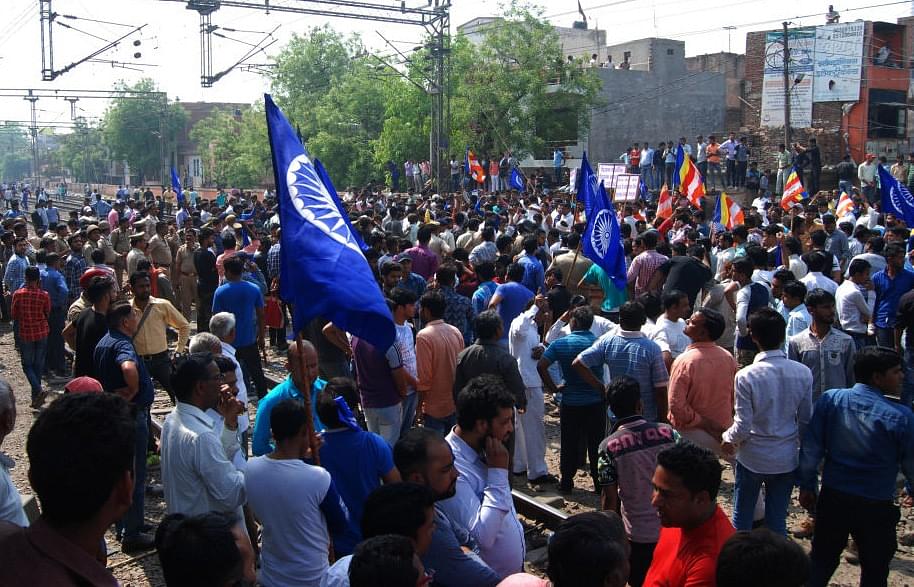 The key setting to the political fight in 2019 is now becoming clearer: the opposition to Narendra Modi will try to split the broad non-Yadav Hindu coalition of 2014, particularly by driving a wedge between the upper castes and Dalits. That the old establishment, including the Lutyens media, is feverishly working towards this is clear from the way the narrative is being framed, but the Bharatiya Janata Party (BJP) should try and use this as an opportunity to course-correct. It is not as if it has no blemishes to report.

It is not a good signal when the Prime Minister needs to claim that it was the National Democratic Alliance (NDA) which gave Babasaheb Ambedkar his due importance in the national firmament. Or that the opposition is merely politicising his legacy. While this may be true, it contains within it both the problem and the solution: giving Ambedkar his due is important for symbolically erasing the old upper castes-Dalit dichotomy, but symbolism alone cannot be a replacement for substance. Ambedkar earned his place through his work, and the BJP did him no favours by recognising his importance. You can create many Ambedkar memorials – in Alipur Road, Delhi, and at the Indu Mills compound in Mumbai, where a grand memorial is to be built – but Dalit estrangement from mainstream Hinduism cannot be addressed by focusing only on these symbols. Not when Dalits recollect centuries of being treated badly and continue to face the same discrimination in several parts of the country even today.

The recent controversy over a Dalit groom wanting to ride a horse through a Thakur area for his wedding – which was initially resisted by the Thakurs – has thankfully be resolved through a compromise. One only hopes that the actual baraat does not become a political occasion for sloganeering and needless provocation. The police clearly need to keep a watch out for miscreants looking for trouble.

In this upper caste-Dalit compromise lies another clue to what the BJP needs to do. The groom, Sanjay Kumar, in fact provided the answer when the Indian Express went to meet him in Kasganj (UP) and get his side of the story before the compromise was struck by district officials. He is quoted as saying: “when the Constitution says we are all equal, and Chief Minister Yogi Adityanath says we are all Hindus, and he heads a Hinduvadi party, why am I facing such a situation? Am I not a Hindu then? There cannot be separate rules for people governed by one Constitution.”

Let’s be clear: there will always be radicalised Dalits who may want no truck with Hinduism, and Hinduphobic forces like the evangelical and jihadi groups, and some deracinated Left groups may well encourage this separation, but the BJP cannot abandon Dalits, who want to retain their Hindu identity.

Logically, this should lead the BJP to see how the caste divide can be bridged over time, and there are a few ways to demonstrate its commitment to Hindu inclusiveness.

First, it should take the political initiative to create caste collaboration councils in all states, and even districts. This council can mediate between antagonistic caste groups when required (as in the Dalit groom’s case). It should step in particularly when incidents like caste violence or bigotry surface over inter-caste marriages, caste customs, temple entry, or even land conflicts.

While it is theoretically fine to say caste councils will not help us abolish caste, castes remain a political and social reality today – as identities are burned into our Constitution and post-Independence political processes. So, even as urbanisation and inter-caste marriages and social campaigns to eradicate casteism work their way through the population, we need an intermediate institution to handle tricky situations like the one that arose in Kasganj, Una or elsewhere. There is a case for creating a United Castes Council whose primary focus should be to resolve differences among castes wherever they may arise. While any party can do this, the BJP, which claims to be a Hindu party, needs to do it as of yesterday.

Second, economic substance needs to be added to social moves towards bringing Dalits to the mainstream. At one level, both the Centre and states should encourage Dalit businesses through various support schemes to source supplies from them. But this is a slow process of Dalit empowerment. The key really is jobs, which can have mass impact. While job reservations already exist in the public sector, one cannot ultimately duck the question of affirmative action in the private sector. While one can oppose reservations as a matter of principle, the reality is that even in jobs that demand low skills – or skills that can easily be imparted quickly – Dalits may be under-represented.

There is a case for incentivising affirmative action through Dalit inductions in private sector jobs that, say, do not require high levels of skills – where merit is important. For example, we are not talking cardiac surgeons, but support staff like ward boys, ambulance operators, even nurses. We should mandate affirmative action in the private sector wherever skills do not require excessive competence to acquire. The jobs where skills are critical can anyway be filled by Dalits through reservations in educational institutions.

Over the medium term, the BJP also needs to create a special fund to tutor, mentor and train Dalits to compete on an equal footing in the higher-skills jobs market.

The lesson for the BJP which is about to lose a substantial chunk of the Dalits who voted for it in 2014 is this: focus on substance, not symbolism alone.

While this may cause some initial heartburn among the upper castes, its job is as much about educating them about the need for Dalit inclusion as about courting the Dalit vote.

The core questions it needs to ask itself are these: how can you be a Hindu party by excluding some kinds of Hindus? And can you claim Ambedkar’s legacy without carrying his work forward?