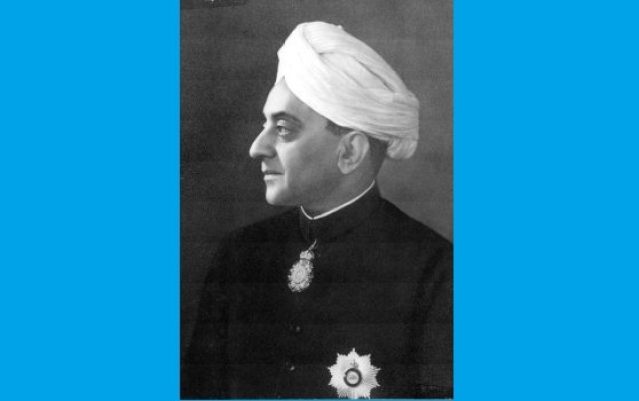 Kautilya in his treatise on statecraft, Arthashastra, has written that the success of a king and the welfare of the kingdom he rules depends on the wisdom of the ministers he chooses.

Nothing in the history of Kerala has proven in letter and spirit than the choice of Sir C P Ramaswami Iyer as the diwan of Travancore by its then ruler Chithira Thirunal Rama Varma. Sir CP as he is known, reigned in the south Indian kingdom of Travancore as a diwan from 1936, whose coruscating brilliance and prescience are yet to be fully assimilated by the very people who still enjoy the fruits of his achievements. An adroit administrator, marginally revered in the intellectual circles and politically hated across the very state to which he dedicated his entire life.

Sachivottama Sir Chetpat Pattabhiraman Ramaswami Iyer, was born on 12 November 1879 in North Arcot in Tamil Nadu on a Diwali day. He excelled in his studies, and in college won accolades for his accomplishments in Sanskrit and Mathematics. He won the Elphinstone Prize for his paper on the Nebular theory and eventually shone in his legal career.

In 1931, on the advice of the viceroy of India, he was appointed as the constitutional and legal adviser of Maharaja of Travancore Chithira Thirunal. He represented the Travancore Kingdom and successfully fought a case against Madras in the Periyar water dispute. CP opposed the granting of permission to generate electricity for Tamil Nadu from the Mullaperiyar Dam, and won the case, basing his argument on the lease agreement between Travancore and Madras in1885 that only mentioned land and water for irrigation purposes and not hydroelectricity. Later on, the communist government under Achutha Menon disregarded his advice, and the state is still paying the price for it.

In the recent Sabarimala fiasco, Chief Minister Pinarayi Vijayan justified the police action against peaceful protestors by comparing the case to the temple entry proclamation. In 1925, 12-year-old Chitra Thirunal promised Mahatma Gandhi on his visit to Travancore that he would allow all Hindus to enter temples in the kingdom as soon as he becomes the king. In 1936, the proclamation came about, 11 long years after he took over as maharaja. Nothing but common sense takes to understand that it was Sir CP, for who the communist rulers never had any great liking for, who was behind the drafting and proclamation of the historic temple entry. It is a least known fact that this was his sole condition for accepting the diwanship of Travancore, and was his first act as diwan.

The administrative abilities of Sir CP was evident from how he seamlessly implemented the proclamation despite drawing severe criticism from the erstwhile conservative, yet influential upper caste Hindus, who also posed a grave threat to the life of the diwan.

Being diwan (prime minister) of the kingdom, his contributions to the development of Travancore as a modern state is unparalleled when one compares the level of industrialisation in Travancore during his times and the Kerala state under the current rule. Under his diwanship, Travancore state became the first to nationalise road transport in India in 1940. The first cement highway in India covering a distance of 88 kilometres was constructed between capital Thiruvananthapuram and Kanyakumari. Capital punishment was abolished, and adult franchise was introduced.

He helped Travancore make rapid strides in industrial development. The Indian Aluminium Company was invited to set up a factory in the town of Aluva. The first fertiliser plant in India, the Fertilisers and Chemicals of Travancore Ltd (FACT) was established by C P to manufacture ammonium sulphate. This was developed with American collaboration in open defiance to the hostility of the viceroy of India. C P also built a plant to produce cement and another to manufacture titanium dioxide. The Travancore plywood factory at Punalur, the Travancore Rayons Limited at Perumbavur and the first plant to make aluminium cables at Kundara are among a few of his contributions to the industrialisation of Travancore.

Apart from being a talented and intelligent administrator, CP was a full-fledged academician. He was the first in history to be awarded two vice-chancellorships (VC) of Annamalai University and Banaras Hindu University simultaneously. CP has also been the founding VC of the Travancore University, present day Kerala University. History of the university says that the visionary in CP had made unsuccessful yet farsighted attempt to invite Nobel laureate and theoretical physicist Albert Einstein to be the first vice-chancellor but the latter had to turn down the offer since the great scientist chose Princeton University instead.

At Annamalai, CP paved the way for Padma Subhramaniam to acquire the first PhD in classical dance. He established the Swathi Thirunal Music College and appointed the legend and Carnatic music exponent Semmangudi as its principal. Before anyone could read caste or gender undertones in his administration, CP named Anna Chandy as the first woman district judge of the land and Mary Poonen Lukose as the first woman surgeon-general. Iyer introduced the midday meal scheme to encourage poor children to attend school.

Branded and propagated overwhelmingly by the communist and left apologists of political and intellectual space as a capitalist, authoritarian, imperialist, anti-Christian and anti-communist-the architect of modern Travancore is unfortunately remembered by the young generation of Kerala for the ‘Punnapra- Vayalar’ revolt. However, a close scrutiny of the life of CP would reveal steadfast loyalty to his duty, his dedication to the kingdom was sacrosanct. and his commitment to eternal dharma reigned above everything else in the choices he made.

CP never regretted the military action he ordered against the communists in the revolt, any contemporary leader in his position today would have done the same in dealing an angry mob posing threat to law and order of the state. He was never against the communist ideology but he was right when he said ” The danger of communist movement lies in the intrinsic doctrine of strife as element of social and political existence and not in its theoretically comprehendible ideology”. Interestingly, he was among the first to oppose Nehru when he misused article 356 to axe the communist government under EMS Namboodiripad in 1959. His observations on the communists remains writing on the wall for people of Kerala even today.

Among many opportunities missed by the government of independent India, not sending CP to represent India’s case in United Nation vis-a-vis Kashmir is still regarded as prominent. Civil servant C S Venkatachar, then a high-ranking official in the Government of India, recollects that sending Gopalswami Iyengar instead of CP was a grave mistake. He among many others in the ruling circles believed that Zafrullah (who represented Pakistan) could have been neutralised, had India instead deputed C P Ramaswamy Iyer as its principal spokesman. “In and out of the UN, he (Sir CP) would have put the best possible spin on India’s case for Kashmir,” says Venkatachar. After visiting China as a delegate of the University Grants Commission in 1955, CP had reportedly warned Nehru about China, but which was ignored, costing India dearly in the Sino-Indian war of 1962.

It is a shame that a stalwart who committed his entire life for the progress of Travancore, is only being referred to as a despot in schools and colleges in Kerala. No wonder the only tribute to his memory is a stone relic recording the assassination attempt against him at Swathi Tirunal Music college by socialist leader K C S Mani (who later on had regretted the act) and no fitting memorial to honour the life of a man who built the foundations of what the present day Kerala state is. As one walks through the state capital city of Thiruvananthapuram, most of the public institutions that one would come across will have a CP signature to it.

Today on his 139th birthday, it’s time we recognised the contributions of the visionary who shaped the destiny of Kerala and grant him, his rightful place.