Dalma: A Dish from the Distant Past 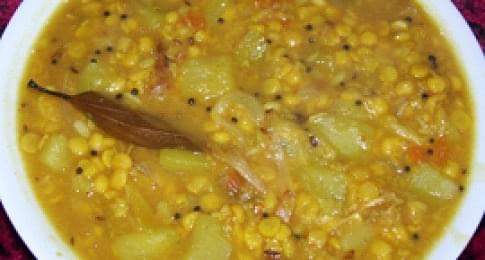 The dalma is a medley of lentil and vegetables, whose origin predates history as we know it. With the passage of time, this dish has become the first introduction to the Oriya cuisine.

What Chole Batura is to Amritsar, Dalma is to Odisha. No meal, whether it’s a daily affair or a feast, is complete without this lentil dish. Such is the popularity of this no-oil, cumin-tempered, lentil and vegetables medley that it has, over a period, become the first introduction to the Oriya cuisine. It is a popular belief that once you have tasted the dalma and loved it, you will love the rest of the food.

What helps is the simple flavours and earthy aroma that makes it an easy dish to fall in love with, and remember too. This, perhaps, could be the reason why, of all the culinary masterpieces, it is this tribal innovation that has travelled to different parts of the country – and beyond. The only other two dishes to have done so are the rosogulla, and in some parts the chenna pouda, which is considered to be India’s first caramelised cheese cake.

Of course, it being part of Puri Mahaprasad has also added to its popularity. But what do we really know about the origin of the dalma? Unlike rosogulla, which was born in the temple kitchen corridors, dalma, it seems, was a gift from the Savaras, the strongest tribe in ancient Odisha. In fact, archaeological records state that the Savaras- the non-Aryan tribe of Odisha known for their social harmony, were the first to worship Lord Jagannath as Neela Mahadeb/ Mahadev.

Legend has it that the Savara king named Viswavasu was among the first to have heard of the deity and then discovered the idol inside a cave. Every day, as a ritual, he would offer the deity (which many believe was the same colour as Krishna, giving rise to the believe that Jagannath is a form of Vishnu/Krishna) and would, on return in the evening, find rice, dal and bhaja (a vegetable preparation) ready and kept, as if to welcome a guest. It was a regular affair, and Viswavasu would happily distribute it as prasad.

This was the lore that reached King Indradyumna of erstwhile Kalinga, who immediately dispatched his priest called Vidyapati as missionary to locate the deity worshipped secretly in a dense forest. After several failed attempts, Vidyapati married Viswavasu’s daughter Lalita, and in lieu of a dowry, asked Viswavasu to take him to the deity. The tribal king blindfolded his son-in-law and took him to the cave where Neelamadhab was worshipped. The clever missionary dropped mustard seeds on the way, which germinated and grew into plants.

Yet, when King Indradyumna proceeded immediately to the Odra desha (major part of landlocked Orissa) on a pilgrimage to find the deity, he was faced with an empty cave. Determined not to return without a darshan, the king fasted and was eventually blessed with a promise of meeting the Lord himself.

The king, who was from the Ganga dynasty, built the Puri temple (of course the current model has been rebuilt after it was destroyed during a Mughal attack), and continued the offering of six different meals instead of only fruits and flowers. Among the prasad that was offered then – that had 30 dishes then which later grew to nearly 100 – was dalma’s ancient version dali or dal. Sweet in nature, it had vegetables in it and tasted divine. Over the years, the dish changed and became more similar to the dalma that was had in homes, except for the use of potatoes. As a tradition, potatoes or alu as it is called in Odisha, aren’t allowed in the temples. Instead, tuber vegetables are used, such as elephant food and arbi.

Traditionally, dalma was essentially chana dal boiled with vegetables grown by the tribes such as eggplant, elephant food, arbi, shallots and pumpkin among others. Served during festive occasions when bhaat or boiled rice was made alongside saag (spinach dish), it was served with a dollop of ghee for aroma and taste. For many back then, Pokhalo (fermented water rice) was a staple. It was this preparation that made it to the Puri mandir, and over the years, due to royal influence and a ‘zeal to offer the god’ unique dishes, the new version, which also has the paanch phoran was born.

Such was the addiction of this dish and its association with Lord Krishna that the ISKON temple too adopted the dalma as part of their prasad when they began establishing their centres across the country. Of course during the month of Kartik, the dalma, which finds its birth in the area which is modern-day Bhubaneswar and surrounding places, changes shape again and becomes Habiso Dalma.

Apart from the colour of the dalmas – dalma is yellow in colour because of turmeric and channa dal, and Habiso Dalma, white because of the use of tuvar dal and no turmeric – the other different aspect is the vegetables used in its preparation. Habiso Dalma marks the auspicious month of Kartik, is void of any tempering – so, not even the paanch phoran – and is made of jackfruit and arbi that gives it its silky white texture and taste.

In place of tempering, freshly-prepared ghee is poured on top before serving.  Made in an earthen pot that has been cured with jaggery water, a good Habiso Dalma is in fact a rarity today. It is said that in the royal kitchens of Puri and Baripada, the preparation of Habiso Dalma was marked by its wafting aroma that could travel to the King’s court, which was almost a street length away.

There is of course yet another tale that old maharajas (Brahmin cooks) love to reiterate for this ancient recipe – one related to the Mahabharata. When Bheema of the Pandava brothers entered the Kingdom of Viraat to hide for the 13th year, he headed to the kitchens, believing he would not die of hunger. Instead, the royal head cook made Bheema cook with no oil and very little spices. Bheema who had seen his wife Draupadi conjure up what many believe was the Hobiso Dalma, a favourite of Krishna, set the pot on boil and began throwing a handful or two of whatever was in sight. What he created after a good 45 minutes after was the dalma presented with ghee.

Little did Bheema realize that by the end of the 13th year, he would have started a new style of cooking, which is today popular as the Bheemo Rasiya or cooking style of Bheema, and it has become one of the five styles of cooking used in the Puri Temple.

A gift of Bheema, an innovation by the tribes or a dish popularized by the temple, the dalma is one of the reigning dishes in Odisha today. Without this medley of lentil and vegetables, no meal is complete.