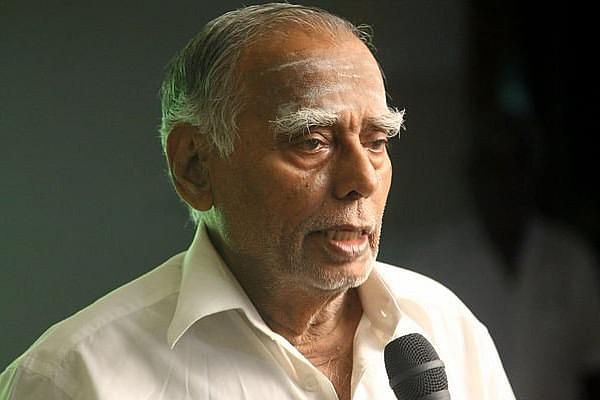 In its own way it is a fitting tribute to an impeccable scholar, a Padma Bhushan recipient, who was also a great lover of India, her culture and society; though we are poorer today because of the loss.

Dr Nagaswamy was 92 but till his last days, he possessed a sharp mind and a focussed mission of heart. An internationally renowned expert in his field of epigraphy and archaeology, Dr Nagaswamy can be credited with creating a veritable parampara of professional students who were well versed in the same disciplines. Far from keeping his work insulated and imprisoned in the ivory towers of academia and coffee table books, he brought a living cultural and spiritual context to his academic work.

He was in the Tamil Nadu state department from 1966 to 1988. In these years he made archaeology and epigraphy a people’s science. His contribution to the cultural literacy of Tamil Nadu is immense and the people who love the true culture of this land are indebted to him.

Dr Nagaswamy wrote many books and booklets on many ancient temples in Tamil Nadu, in both in Tamil and English. These books and booklets brought the important historical and cultural dimensions of the temples to the devotees. His expertise in Chola bronzes is rarely matched within the academic field. He put this expertise to good use, as in the very famous Pathur Nataraja case, which was fought in London court.

The case for recovering Nataraja was officially filed by the Goddess Sivakami and the Goddess was represented in the British court by then Indian envoy P.C. Alexander. Dr Nagaswamy appeared as an expert witness whose testimony played a key role in retrieving the sacred idol of Nataraja. This was in 1991.

He also fought against the false narratives which enjoyed immense popularity and political clout not only in Tamil Nadu but in academia and media. Because of this trait, he was also attacked at times.

His commitment to Dharma and Rashtra came from his deep understanding of the historical reality that archaeology revealed to him. While standing against false narratives, he was also equally against the flights of fantasy some modern day ‘nationalist’ enthusiasts indulged in. To him truth was of paramount importance.

He made the bold assertion that there was no such separate entity as Tamil culture but that there is culture in Tamil and this culture is the Tamil manifestation of the culture of Bharat. In fact, to him, the culture of Bharat could not exist without Tamil contribution and to construct a separate Tamil identity is in itself rejection all the glorious contributions Tamil society made to the pan-Indian identity.

His deep understanding of the society, culture and epigraphy made him see what the superficial, armchair, theoreticians who borrowed alien frameworks often failed to see.

For example, in most Marxist, Western Indological as well as Dravidianist narratives, the ‘Brahminical’ is depicted as an elitist power that is non-democratic and even anti-democratic, and as a symbol of concentration of ritual and knowledge power. But Dr Nagaswamy pointed out the fallacy of such a view through hard data:

This was no speculation but a statement supported by hard empirical data literally written on stone: epigraphic evidence from various Vedic colleges established by famous Tamil kings in various parts within their empires, mostly in Tamil provinces.

One can easily see how this view differs from the colonial image of Brahmins as priests indulging in priest-craft villainy; an imagery morphed from Protestant view of Catholic priests.

Dr Nagaswamy also did not hesitate to cross swords with forces of the internationally powerful Indology cartel in academia. When claims were made that the Harappans knew no horses and that Hindutvaites were trying to fabricate evidence to the contrary, Dr Nagaswamy came out with an article that in turn questioned the 'no horse in Harappa' argument.

The surgical precision with which the veteran archaeologist from Tamil Nadu countered the rhetoric of a Harvard Indologist makes one feel inspired by his scholarship even today:

Only those who have been within Indological circles know what it takes to charge the professor in question with ‘reductio ad absurdum’. It was Dr Nagaswamy's complete conviction that one need not rely on non-factual fantasies of grandeur but can serve both truth and the nation by being truthful to facts.

His book, Dharma Yoga, which came out in 2020 (in which Dr Mohan Nagaswamy and Dr N.Kala were co-authors) is again a masterly work on Dharma in its entirety.

Though the author himself was a staunch Sankara-Advaitin, his work on Dharma included all the spiritual streams of India, including Buddhist and Jain and also the ten commandments of Judaism.

In a book that ran into 371 pages with benedictory blessing from the venerable Kanchi Shankaracharya, the authors dedicated 109 pages to Emperor Ashoka. Such was the grand Dharmic heart of Dr Nagaswamy and his all encompassing vision.

The great soul who had been a guide to generations of scholars has at last take refuge in the sacred feet of his Guru – Kanchi Sri Chandrasekarendra Saraswathi – to whom the archaeologist had the greatest reverence in his life.