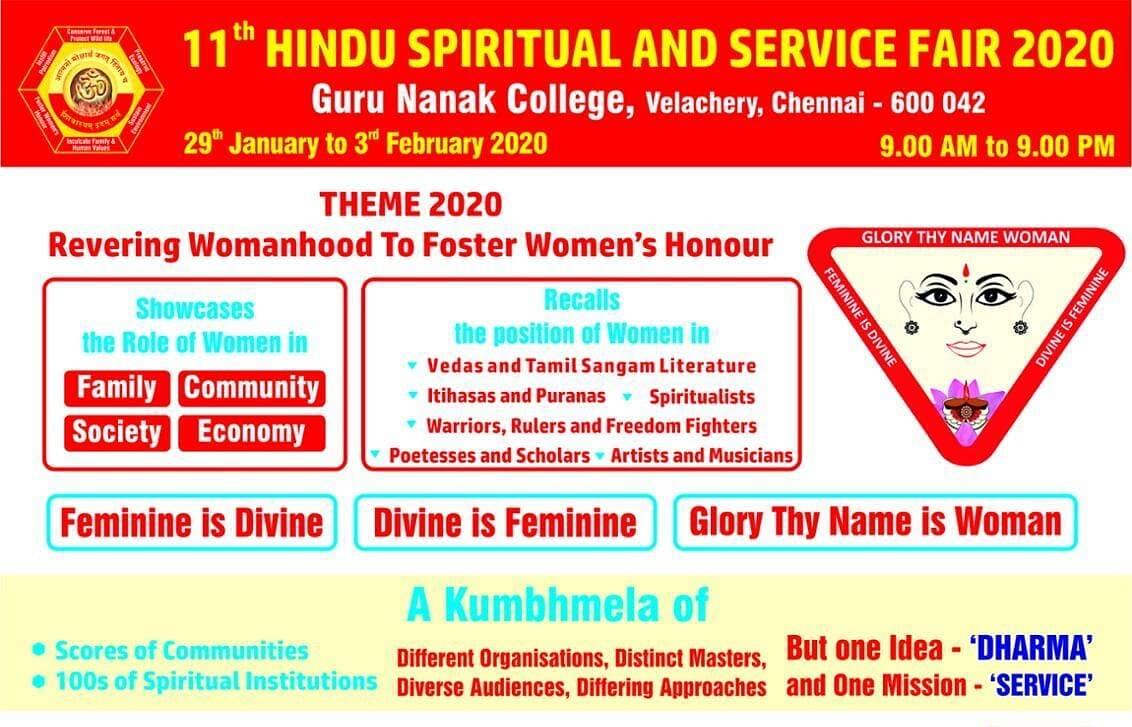 Poster of the event.

Revering womanhood is the focus of the 11th Hindu Spiritual and Service Fair (HSSF) 2020 that began at the Gurunanak College Grounds in Chennai and will continue till 3 February.

The event was inaugurated by Mata Amritanandamayi Devi “Amma” on Tuesday (28 January).

Themed “Revering Womanhood to Foster Women’s Honour”, the HSSF will showcase the role of women in family, community, society and economy. It will recall the influential part played by women in Vedas, Tamil Sangam literature, history, puranas, spiritualism, and freedom struggle.

It will also review how women had been warriors, rulers, scholars, artists and musicians through the ages. HSSF 2020 will attempt to create spiritual awareness through various poojas and related activities, training and engaging the youth besides holding traditional cultural programmes.

Other crucial topics that will be dealt with at HSSF are ecology, environment sustainability, forest conservation and inculcating family and human values.

The HSSF is conducted by Global Foundation for Civilization Harmony-India (GFCH), a platform of different cultures, faiths and civilizations to promote dialogue among civilizations with an emphasis on the East.

Concerned over deriding Indian spiritualism, the Indian arm of GFCH felt that its intervention was needed to correct the wrong perception. Therefore, it decided to create a strategic platform to showcase the service activities of Hindu spiritual institutions and thus HSSF was launched.

GFCH itself was born out of concern over the future of Hindu-Buddhist civilisation with the power shifting to Asia. Over 100 persons from Asia, Europe and the US met in Ahmedabad during December-January 2006 and decided to launch the GFCH-India.

GFCH-India was started in January 2008 and it has led to a series of initiatives by or assisted by GFCH. It has co-sponsored anti-terrorism rallies along with Deoband Islamic school.

It assisted the Hindu Dharma Acharya Sabha in the path-breaking all faiths global meet in Amsterdam on the Occasion of the 60th anniversary of the universal declaration of human rights in December 2008.