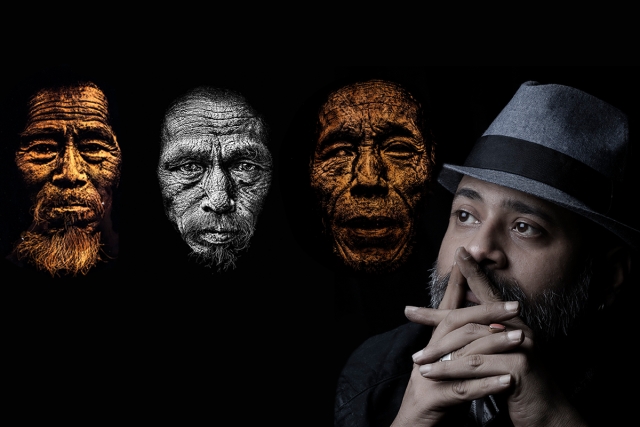 Udit Kulshrestha and some of his creations.

Delhi-based senior photographer Udit Kulshrestha's journey to the North East intensifies each time he revisits stories in the region.

Identity-based projects in conflict geographies, currently, have looped him back into the region every year, largely since 2012. One such project is his work on the headhunters of the Wancho tribe.

His ‘Wancho Series’ has opened up several facets of the tribal tradition of head hunting practised by the Wanchos.

Headhunting is the practice of taking and preserving a person's head after killing the person.

"The Wanchos originated in Mongolia and migrated to India in the twelfth and thirteenth centuries,” he says “and claim to have left behind a part of their population in the naga (naked) hills who came to be called ‘Konyaks’ — meaning men with black hair, in the remote and inaccessible Upper Patkai hills of Arunachal, (India’s longest border in the North East apart from being the longest border alongside Myanmar as well).”

His portraits of the ferocious men of the Wancho tribe — honest, piercing, reflective, inward and profound — provide the first milestone to a journey into the forest lands of the North East, and their visual history.

The path to the Wanchos opens up from Guwahati. Then, to Dibrugarh or Itanagar — a ferry ride across the mighty Brahmaputra. Then, to the road for 5-8 hours — across protected lands and reserve forests with permission. That is four days, at least, to get to the villages.

It is marked by difficulties. There are incessant rains for nine months. It is tough to navigate through mud and slush.

Kulshrestha needs a four-wheel drive to reach villages as certain paths are not navigable. The roads beyond the Indian checkpoint at Pangsau Pass (on Ledo Road/ Stilwell Road) are a real challenge — "post the sightings on Lake of No Return" — even on a good day.

At the villages, there is much to finish before the sun starts setting, which is around 4pm. Interactions have to be cut short sometimes.

He says, “there are the traditions of paying respects to the chief and him taking you to elders to engage with them. The chief often has visitors and a to-do list, so you observe from a distance sometimes. Sometimes, you get lucky and you get what you actually came for."

The practice of headhunting was abolished in the 1960s, "with the advent of civil society and Christianity in the geography", he says.

Then, he discovered an important aspect of their history during his work on this series.

"Their oral history verifies them to have contributed to India’s pre-Independence wars in 1875, in the battle of Nyinu, where the tribe’s headhunters killed 80 members of the colonial survey over a cultural gaffe. This is documented in British history of India but undocumented in Indian history," he adds.

The visual language of his work has surely emanated from the connection he could build with the members of the tribe.

He witnessed some endearing gestures. The chief made him "a 3 BHK bamboo hut" and gave him "enough land to cultivate monthly veggies". "Last time I went, I had a pet jungle cat to protect and serve the land too," he adds.

He loves stories and the Wancho elders are great storytellers. Their oral histories enchant him.

Some have heard the mentions of Wancho by Christian missionaries, some of which seem to emerge in the United Kingdom or New York libraries.

There were other aspects of their lives — the rice beer myths involving mystical creatures, the stones that bless and ward off evil, the bravado of the headhunting warriors, the polygamy of the chieftains.

Wood, A Process, And History

The portraits of Wanchos reveal Kulshrestha’s own sensitivity and understanding of the people who belong to an ecologically sensitive terrain.

More compelling is his use of the technique of alternate cyanotype prints for the works — a photographic process which gave him a chance to involve wood to portray the men of the ferocious tribe, and their lives in the forestland.

Cyanotypes (over 140 years old) are part of photography history as a technique. Why did he think of the confluence of wood and portrayal using the old technique that involves chemicals and sun?

"The Wancho society practises Animism. This is where I found the first connect. Heritage and tradition was the next — both exist today. As regards the wood, the Wanchos consider the forest land as land of their forefathers and hunting grounds and treat it with respect as these are sacred."

Wood was sourced from these lands. Identities (the forests and Wanchos) were at the centre of this thought.

Wood was exposed using the alternate cyanotype process — under the sun.

Then he stumbled upon an observation. It was: "the wood from the geography react differently to the process than regular wood from elsewhere. Adding soil to the chemical process plus a few other light sensitive materials ensured I get the needed visuals tonalities to realise my vision." He has experimented in the relics works as well.

Kulshrestha sees some of his work as a beginning. He adds, "maybe someday, someone from a different domain would love to take it forward, add to it, question it, turn it around or at least have a starting point somewhere."

The Wanchos have told him about the efforts from the state government and forces to integrate the people. "The Wancho chief at Pongchau (14kms from the Myanmar border and the last Indian village before the hills start) has personally confessed to me that it's the Indian Army that has included them into the mainland by making them feel ‘belonged'," he adds.

There are times when he notices how the development projects taking place in the region are connecting and making remote areas on the borderlands accessible.

He adds, "I can only say, the external threats are taking a different form of causing unrest for the times to come. Militancy might be on its last leg in North East. There are concerns and issues that affect India due to the proximity of Kachin, which is a military rebel base — that issue is not internal to India, yet affecting our nation."

Since 2012, his work is restricted to BTAD (Bodoland Territorial Autonomous Council) in Assam. Subjects that have occupied him include: displacement in a conflict geography (adjoining it is the Siliguri corridor); maternal health issues of the women in relief camps during 2012 and 2014/15.

He tells Swarajya that he has also documented political violence and council elections in BTAD.

The other major work is in Arunachal Pradesh. He has been photographing tribes here.

He has documented the last remaining non-Christian Nocte tribe village through identity-based portraits. He has travelled to other ‘protected geographies’ in Arunachal with permissions and photographed the Singhpos. He wants to turn to the 23 more tribes, which might take him around several more years if not a lifetime.

The Trigger To Travel

An invitation from a friend triggered the exploration. "A friend from the North East turned out to be a Nocte tribal chief."

He invited Kulshrestha to Chalo Loku — a local harvest festival. In September 2012, he went on a short trip to the region. There, he got a chance to witness the Nocte headhunters, who were dwelling in the lower Patkai hills.

His work in the region has given him a chance to witness the evolving of political undercurrents and visible changes on the ground, including the beginning of inroads made by the Bharatiya Janata Party (JP) here.

"I have seen Mr Sarbananda Sonowal giving his speeches even before he was Chief Minister of Assam, there," he adds.

His work is documentation and photographic enquiry smeared in passion for art, history, geography, rituals, oral traditions, travel, process and material. He is planning to work on a text and visual documentation on aspects related to tribe headhunters' resistance against the British.

He thinks he might have contributed to the visual history of the country. There is no doubt about it.

Kulshrestha believes that sometimes it is not "how you see the world, but your relationship with it, that makes the photographs. Portraits from the series point at this weaving of a relationship with his ‘seeing’ the Wanchos and them seeing him over the process.”